"We're so busy growing up we sometimes we forget that they are also growing old."

That's the tagline of See Your Folks, a new website that uses life expectancy data from the World Health Organization to determine how many visits one will get in with their parents before they pass. That's right: The "they" in question is you. 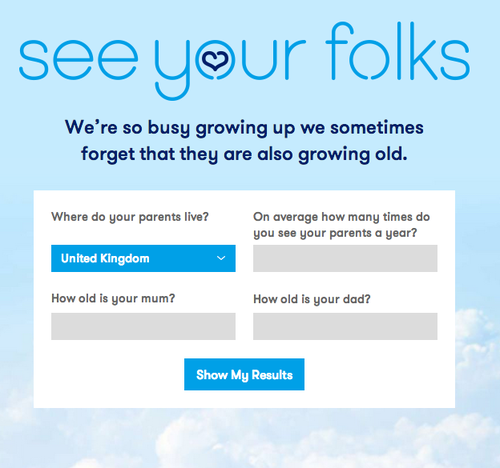 The streamlined site gets straight to the point, asking: "Where do your parents live?", "On average how many times do you see your parents a year?", "How old is your mum?" and "How old is your dad?" before spitting out a number that would drive everyone except those with the stoniest of hearts to call their parents immediately.

It's an equation See Your Folks co-creator Luke Tipping did in his own head a few weeks ago, when friends were trying to get Tipping to stay in London to party instead of going home to see his parents. "[I] did a simple equation in [my] head. The number [I] got back wasn't big enough," Tipping wrote to the Huffington Post.

Created in just 24 hours, the site already has 98,000 unique visitors and hopes to evoke that same feeling in all who use it.

"As a piece of stimulus nobody enjoys seeing the number, although its power is in creating behavior change," Tipping wrote. "So far we've had some wonderful feedback from people describing how they've subsequently booked a holiday with their mom or left their phone upstairs to have deeper and more meaningful conversations with their parents at the dinner table. Some of the stories we've had back about people calling or going to see their parents have been remarkable, really touching and made the project so worthwhile."