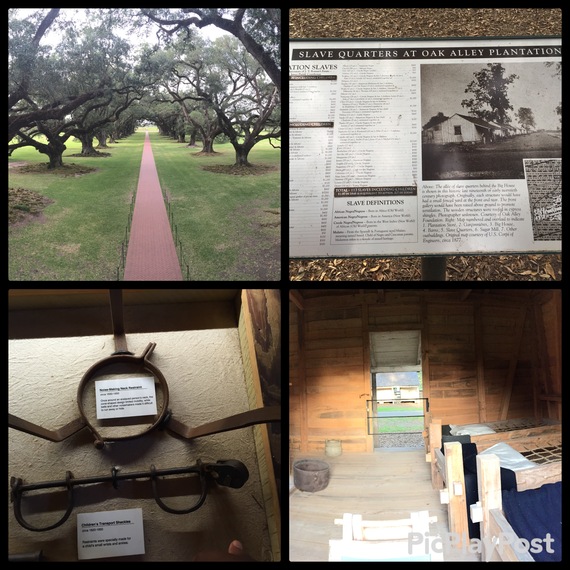 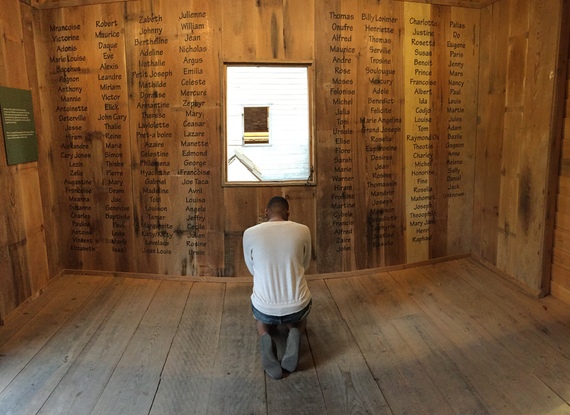 (Note: The pictures above were taken on the plantation. The top is a collection of photos and the bottom photo is me kneeling before the names of the 124 slaves from Oak Alley Plantation.)

It was a month ago that a couple of friends and I descended on New Orleans. We were there to see each other because it had been so long since we had all hung out together. The weekend getaway had been in the works for months. A couple of us flew in from New York City, a few more flew down from California and then there was our friend who live in Denver who also made the trip. Like I said this trip was just going to be a fun, relaxing weekend. We knew we would take in the sights of Bourbon Street, hit the French Quarter for brunches, and walk along the river front. All of those things are expected when you travel to the most happening city in Louisiana. One of my friends, however, a major history and especially African-American history buff also wanted to add some cultural elements to the mix, well one in particular. A trip to a slave plantation. She had it all picked out and talked many of us into going with her. I was one of those people and having lived in the south, having gone to school in the south I remember field trips to such plantations. I remember going through the motions but not really paying attention to what was being said or listening to impact of what slaves endured is a major reason why I am in this position that I am in and able to share this experience with you.

I will say that I was very apprehensive about going. The trip was supposed to be fun and hearing about slaves I'm sure would take me to a place where I didn't want to be. However, I agreed and we got in the car and drove out to the plantation. Oak Alley Plantation in Vacherie, Louisiana and I will say that the grounds of this plantation are simply breathtaking. It's surrounded by rows and rows of oak trees that were planted in the 18th century. It's truly a spectacular view. The plantations website boast about it's the best location for reunions and weddings. I mean I can't say it enough it really is picturesque. I remember cracking smart remarks as we pulled up and the three friends on the journey with me mentioned I should have an open mind. I decided to give that a try and I was ready for the tour. Once reaching the main house or "big" house as they referred to it we were greeted by a woman who asked if we wanted a mint julip to drink. My friends got one but I declined. Once inside the house we were greeted by tour guides dressed in full garb and other people just like us who wanted to take in the history that was once living and breathing on those hollowed grounds.

The tour started with our guide introducing us to the owners of the house. The first people to live there were the Roman family and according to her Mr. Roman was much older than Mrs. Roman who I learned enjoyed to party as much as she loved her booze. I found it odd at first thought but as the tour went on I thought it added to the story line of Oak Alley and we were there to learn about all of its history. Things started to shift when the first mention of the slaves back in that time was sort of skipped. I recall the tour moving through the dining room area and there was this huge fan hanging over the dinner table. The tour guide informed us that Louisiana summers could be hot so when the family hosted dinner parties there would be someone standing in the corner operating the fan manually. I looked around to see if anyone was alarmed that she couldn't call that "someone" manually operating the fan a "slave" or "servant" because let's be real that's what he was. I would later learn that there were more than one hundred slaves living on that plantation but there was no mention on them in the house or on the grounds. We spent roughly 45 minutes touring that house and in the entire 45 minutes there was not one mention of the people who were bought and sold and kept held against their will. No mention of the people who were beat and punished if their masters deemed they did something unbecoming of a slave. No mention of the people who broke their backs chopping sugar cane and tending to their masters and their masters children. No mention of the slaves that kept the grounds of Oak Alley so beautiful and pristine. I started to feel like that mom in Texas, Roni Dean-Burren who spoke out against McGraw-Hill for listing slaves in a history book as workers. But I think it all came to a head for me when one of the people on the tour after being asked if anyone had questions decided to open his mouth and ask "I'm just wondering and there's no easy way to put this given the subject matter, but were they nice and gentle slave owners."

My response in my head was sir there's nothing nice and gentle about slavery. I only wish now that I had said it out loud. It was only then that after telling us about the slave owners that the tour guide mentioned that there were six replicated slave cabins on the grounds and that we could take a look at them if we wanted but there would be no guided tour. As everyone filed out of the big house the only people to finish out the tour of the slave cabins were me and my three black friends. We had no tour guide just the history fact sheet that's listed inside of each cabin to give you some idea of a slave's day to day life there. What I saw was appalling and so devastating that it should be incorporated into the tour. I left feeling like that Oak Alley Plantation only wants to present the beautiful side of what it was like for the slave masters but what about those 124 slaves who kept that plantation up and running? What about those innocent children born into slavery with no hope of ever knowing who it would be like to be free? Inside those cabins I saw things I could ever imagine having to live through. I saw instruments used to tie the slaves down if they became unruly. I saw tools used to capture and reprimand small children. I became so outraged that I started to breakdown silently inside the cabins.

So here's what I'm going to need Oak Alley Plantation and any other plantation that use the plantation as a trip down memory lane to do, make sure all of the facts are in. Yes, slavery is dark and sometimes you don't want to hear about it but we can't sweep it under the rug like it never happened. Let's be truthful about the history of this country and let's not water down that history. One of my friends mentioned how she read an article written by a former plantation tour guide and she spoke of the same things I'm now writing about. I left Oak Alley feeling empty, sad, and depressed but I also left feeling like a part of who am was left hanging in the wind. Outside of my friends and me the people on the tour with us didn't really care about the slaves, didn't care about the long hours they put in to help make Oak Alley that gorgeous piece of land that we all walked across on that October afternoon. Finally, there will be things that are just too hard to talk about, I do believe slavery falls into that category but I want us all to think about the long hours, the being captured, bought, and then sold; think about the labor, the pain and sometimes grief stricken families who are torn a part, think about the dollar amounts placed on someone's life and maybe then you will understand the full scope of why we this part of history cannot be forgotten.