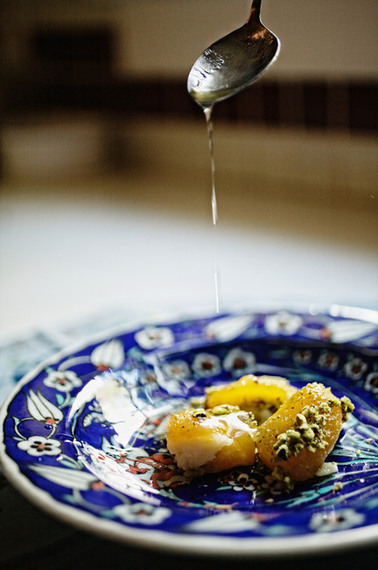 (The following is the second part of a three-part fictitious short story. Read part one here and read part two here.)

"Mr. Bardakçı, I've been meaning to tell you something since I arrived tonight," Kiera began. Her uncle's eyebrows arched as he waited for her to continue. "I'm in Turkey to learn more about my father...if I can, I'd really like to write a book about him...about his work as a writer before he...well, about what shaped his work, and what he considered to be his project as a--"

"So you've come looking for answers, have you?" Mr. Bardakçı interrupted.

"Answers aren't always as helpful as we'd like to think. Kiera, my dear, I'm not sure if..." His voice trailed off as he refilled his glass, one part rakı, one part water. "Your father and I used to be thick as thieves. The part of the world where we're from--we grew up a couple of hours south of Erzurum, I doubt you're familiar with it. Are you?"

He drained his glass and poured himself another, this time without adding any water or bothering to refill Kiera's glass. A trace of rakı-fueled slyness glinted behind his thick glasses.

"Growing up, like I said, we had to be thick as thieves. There was a saying among the men where we come from: 'The gun may be a cousin, but the knife is like a brother.'"

This was a lie. No one said this in the village were Kiera's father grew up. The truth was it was her uncle's favorite line from L' usage du monde. He trotted it out from time to time to maintain the mythology of their village in Anatolia.

"Of course, we learned certain things from our elders," Mr. Bardakçı continued, "certain ways of justifying what we did... coming from nothing, your father and I had always wanted to move. You must know that by now?"

"Yes, just as I suspected. You already knew that. Books did that to us: made us see beyond our small Anatolian world. We'd put our money together, throw in a few smuggled cigarettes, and buy ourselves a new book every Saturday from a man who ran a stand behind the bazaar. But they also made us foolish enough to believe we'd somehow write our way to Istanbul, all the way to honor and literary fame and so forth."

"You wanted to become a novelist?"

"I had a phase, sure...sure my dear Kiera, but the last time I allowed that foolish fantasy to take up any space in my mind was decades ago...back when you wouldn't dare venture into the streets of this city without first polishing your shoes and dressing away whatever poverty you might be facing in private. But you see, Kiera, when you know as much as I do, writing a novel becomes quite problematic."

Kiera suppressed the urge to laugh at her uncle's conceit. Her hands began to wander over the table in search of the bottle of rakı, but before she could lay her fingers on the cool glass neck, Mrs. Bardakçı was pouring Kiera's drink for her. Sipping from the freshly poured glass caused Kiera's concentration to go soft at the edges. It wasn't until sometime later when he said "Arslan," her father's first name, that she retrieved an indigo Moleskine notebook and pen from her jacket pocket.

"Sorry, could you repeat that?" Kiera asked while flipping to an unmarked page.

"Hangi bölüm? About the Turkish press?"

"I said that you should respect your father for surviving as a writer in Turkey for as long as he did." He paused, watching Kiera's somewhat unsteady hand racing to keep up before he resumed the elegant stroll of his sentences. "But what is a writer?" He tossed back another full glass of rakı, letting the question hang in the air, no longer concerned with the social convention of slowly sipping and pacing oneself with yogurt and black olives and fresh white cheeses and fish bathed in oil.

"Why does a writer write? Is it to play intellectual games? To show the reader how clever he is at crafting puzzles? Or is he a circus act? Someone who walks a tightrope to attract a crowd? Or perhaps he is a whore. Half the volumes on my bookcases here provide no shortage of evidence that suggests this is what most of our writers have become...only there's nothing pleasurable about their work. What's that phrase in English you all use in America?" He stopped to wait for Kiera's response, as if he'd already provided more than enough information for her to read his mind.

"Sell out! That's it! Since there is nothing pleasurable about what they do, perhaps we shouldn't call them whores. Sell outs, yes?" Another glass of rakı disappeared down his parched throat. "This is the climate your father tried to write in. He--or I guess I should say "we"--had a different vision for what a writer was and could be. But that's what made it so difficult for him my dear Kiera...your father was nostalgic for a country that will never exist."

Kiera sat unblinking. She was listening closely now, recording each word with the swift efficiency of a crime beat reporter, breathing in the aroma of fish and peppers that had been baking in the kitchen all afternoon. This is why I'm here, she thought. On the avenue out front, young people's voices mixed with the clamor of cars being driven like they were horses--horses don't have turn signals; horses stop when and where they want.

"So when was the last time you saw your father?" Mr. Bardakçı asked.

Kiera hesitated, unsure if he was laying a trap for her.

Her uncle unbuttoned the cuff of his right sleeve, slowly rolling it up along his forearm. Moving on to his left sleeve, he stopped midway and flashed a knowing grin.

"This is a joke, no? American humor. Amerikan mizah!" he leaned away from the table and said to his wife. She laughed, though without the slightest idea of what they were talking about. "I never could quite understand American hum--"

"There's nothing funny about what I'm telling you. I never met my father...not even once. He left me and my mom when she was six months pregnant. I talked to him maybe--what, once or twice a year at best?--yeah, like once during Ramadan and once during New Year's Eve he'd call and we'd talk over the phone. I never met the man though."

Mr. Bardakçı began speaking to himself in Turkish. His wife occasionally tried to interject, a soft counterpoint to the rising anger of his voice. The only word Kiera understood in the rush of Turkish pouring from him now was "kardeş," the Turkish word for "brother." The vein throbbing in his neck, however, was perfectly clear, as was his balled fist clinching tighter and tighter as he interrogated the ghosts now seated at their dinner table. For the first time all evening, Kiera clearly saw the life this man had led seeping through his countenance, the dimness of his eyes testifying to the thoughts he'd inhabited, the words he'd spoken, and the actions he'd chosen throughout his life.

As he spoke that tongue of waned empire, the sad melody of his voice joined with the sounds of Kiera's first day in Istanbul: olive trees soughing as she waited for the train, street vendors' chestnuts hissing on open fires that danced in the wind, calls to prayer ricocheting from a thousand points across the city, the murmur of her father's voice growing dimmer, distant, as if bled of color by time.

When he finally fell silent, Mr. Bardakçı hunched forward in his seat. He sat motionless for a few breaths, staring far beyond this strange young woman seated across his table. In one fluid motion, he grabbed his rakı glass and whipped it past Kiera's head. Kiera blinked hard and banged her knee against the edge of the dinner table, Mrs. Bardakçı shrieking as the pitch smashed the large glass mirror hanging behind her niece.

"No wonder your father never spoke about you!" Mr. Bardakçı spit.

By the time she'd put on her shoes and was unlatching the heavy bolts on the front door, Kiera's uncle had already retreated to the balcony, where he would stay the rest of the night chain smoking Pall Malls and trying to make his seven-stringed Bağlama sing a complicated truth. His wife was still crying as Kiera saw herself out of the building. She'd tried to apologize to her niece, but when she could not remember the English word "sorry" and saw that Kiera was not going to wait for her, she began wailing. Once the front door to their building had slammed shut, Mrs. Bardakçı retrieved a broom and pan from the kitchen and swept up the aftermath of her husband's impotent rage in silence.

Kiera ran through the winding streets of Cihangir, passing street vendors selling whatever remained of the day's catch, cutting through the middle of a group of German students taking selfies, the dark, sinuous curve of the Bosporus looming in the background. 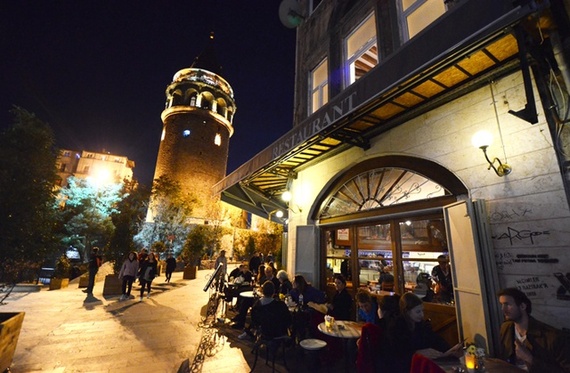 On the last block before the bar awaiting her return, Kiera passed an old man in a wool suit sitting next to an open suitcase full of fake watches and eating sunflower seeds from a plastic water bottle. He'd bought the watches conspiratorially earlier that morning from the Senegalese merchants hustling down the street from the Blue Mosque. He smiled at Kiera from his seat on the curb, head still dizzy from calculating the profit he'd reap after marking up these false timepieces.

The man held out one of the watches for Kiera to examine. As she stared into the soft green glow of the LED display, tears began to wet her soft cheeks.

"Why do you cry, precious daughter?" the old watch seller asked in Turkish.

Kiera didn't understand a word the old man spoke, but even if they hadn't been separated by the sea of language, how do you explain to someone when you are only 28 years old that, like your father, you were mourning a country you now realized might never exist?