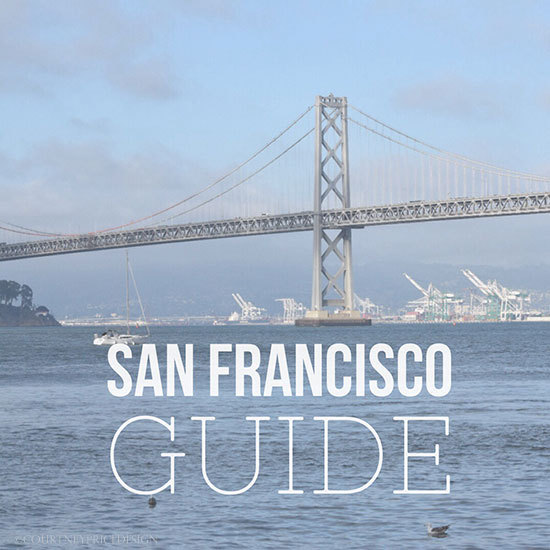 This guide is for the San Francisco tourist, from a recent visitor: a photographic guide of pointers that bring together a list to choose from when planning your visit -- points of interest, noteworthy areas of the city, factoids, historically famous San Francisco spots, best views, and recommended restaurants. The good news is that the city is not so big that you can't fit in quite a few of these items onto your agenda during trip to the area. Come explore the beautiful city of San Francisco here: 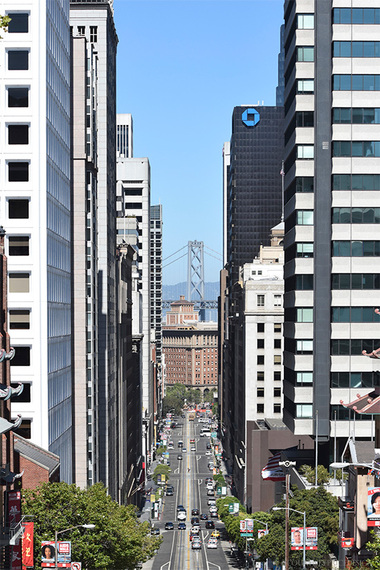 THE RIGHT SHOES.... Walk around this city all you can to soak in the details of San Francisco's charm and the delightful weather. It is so beautiful. See these hills? Take them seriously. Pack the best walking shoes you have and consider leaving the high heels at home. The slopes are intense. This view is from Nob Hill looking down. 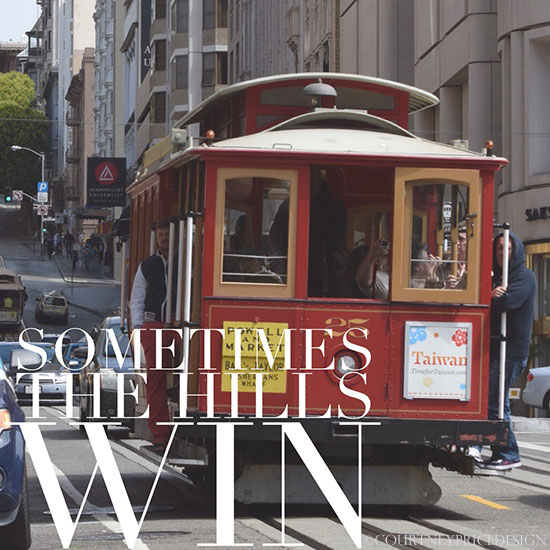 The world's last manually operated cable car system is an internationally recognized icon of San Francisco. These cable cars might be a welcome sight if walking the hills finds you gasping for air. The cable cars are listed on the National Register of Historic Places. 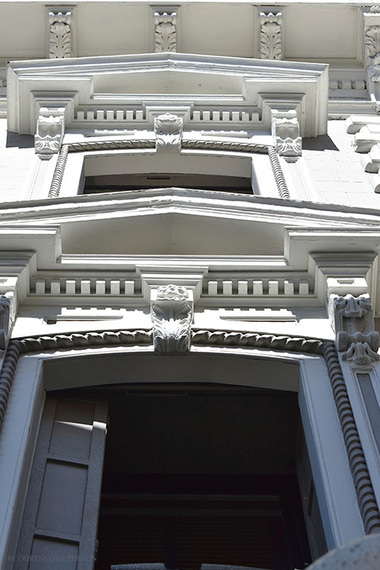 The architecture is stunning and unique to the area. There is an interesting book that explains the multiple influences of the San Francisco style in great detail, recommended for serious fans of architecture for its ultra thorough explanations: Victorian Glory in San Francisco and the Bay Area. Much of the architectural style of the area is surprisingly, a blend of Victorian and modern styles. 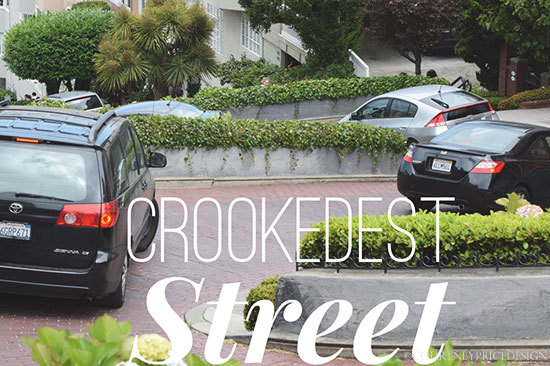 Lombard Street, the famous crookedest street, located in the Russian Hill neighborhood. A visitor must. The homes in this area have views that would take your breath away. This one-block long section, between Hyde and Leavenworth Streets, has eight sharp turns, making it popular for getaway scenes through the years in movies and on TV. 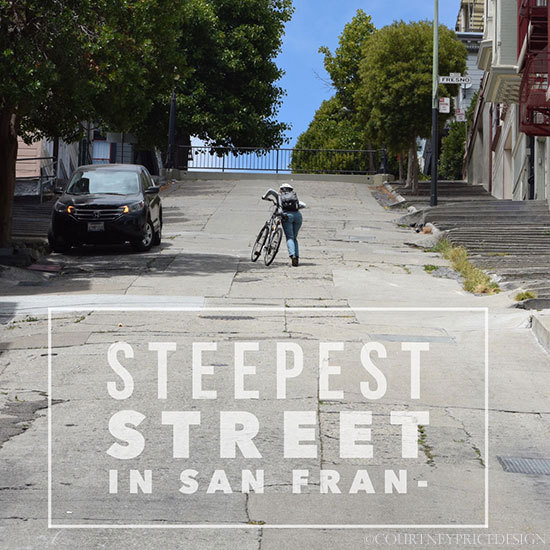 I was told that this is the steepest street in San Francisco. It might be more accurate to say that it is one of the steepest streets, at 37.5 grade, Romolo Street. Hoping this biker was not planning on a downhill spree, the street below is high traffic. 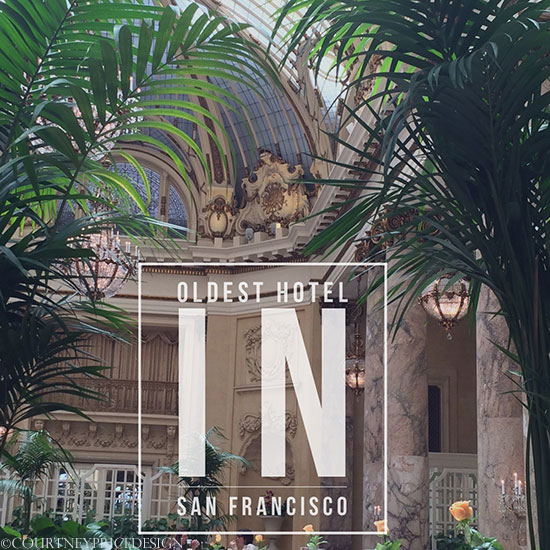 The Palace Hotel is the oldest hotel in San Francisco. In 1875 it opened as the largest hotel in the world, with 750 rooms and multiple innovations which included elevators, telegraph communications and private baths. Scenes from The Game were filmed here. The famous Green Goddess Dressing was created at this hotel in 1923. The magnificent Garden Court pictured above is San Francisco Historic Society's Landmark #18. 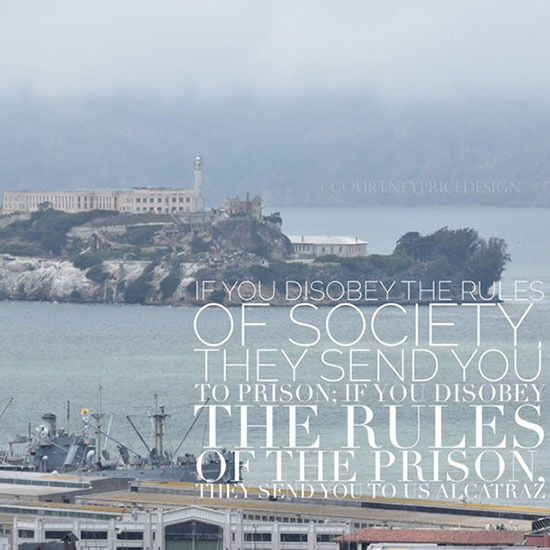 Alcatraz - aka "The Rock" is located 1.5 miles offshore from San Francisco. This National Historic Landmark is a major tourist attraction, home of the former Alcatraz prison, and no stranger to pop culture, appearing in numerous movies and TV shows. Some famous names in history, including Al Capone, once called Alcatraz home.

Depart from Pier 33 for a tour of the famous Alcatraz Island... details, schedule and pricing here. 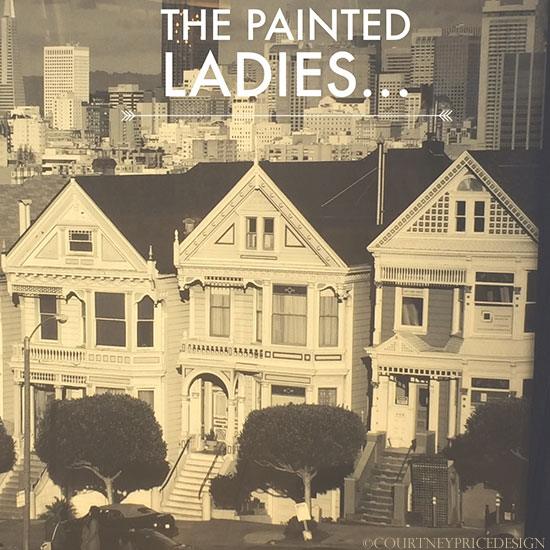 The Painted Ladies - In the Alamo Heights neighborhood, these are the houses that always seem to make it into San Francisco movies. Worth a drive by to see the beautiful colors. 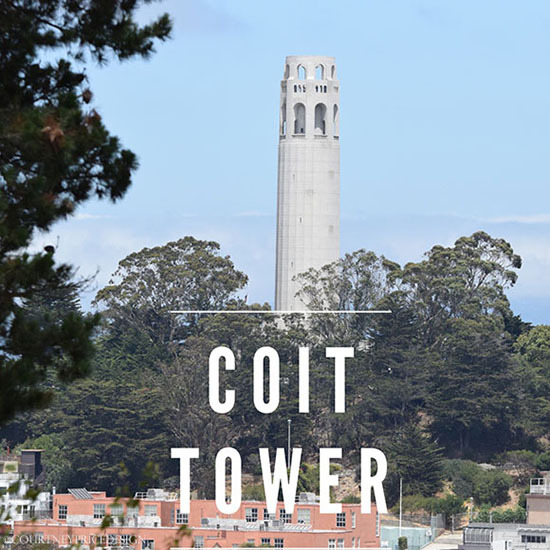 Coit Tower - Located atop of Telegraph Hill. Seven dollar entrance fee for the unparalleled 360 degree views from the observation deck, and the famous murals depicting life in California during the Great Depression, which were the first WPA funded art project. The tower was built in 1933 as a monument to the San Francisco firemen... perhaps why people say it looks like the nozzle of a firehose. While you are on Telegraph Hill, I recommend THE STAIRS OF TELEGRAPH HILL: take them down, all 400 of them, and enjoy the views of the city along the way, along with the famous wild parrots of Telegraph Hill. Once you get to the bottom, the Embarcadero is to the east if you want to head to Fisherman's Wharf. 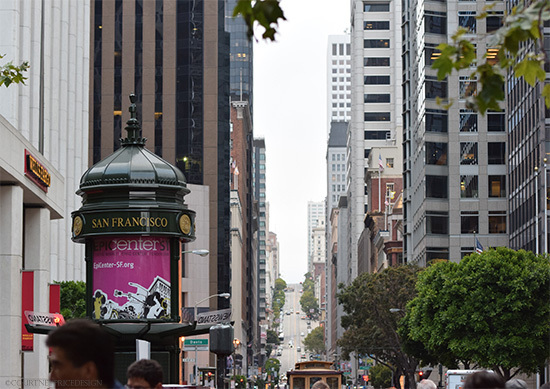 Market Street - For a beautiful metropolitan vibe, this is the pulse of down town. Market street starts at The Embarcadero and is considered to be the Champs Elysees of the city. 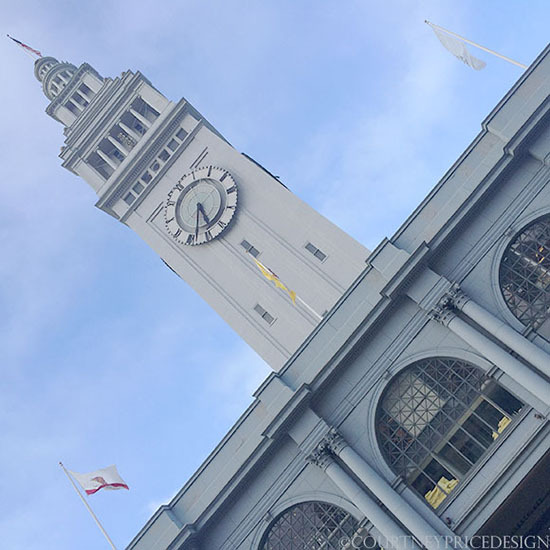 The Embarcadero begins at the intersection of Second and King Streets (near AT&T Park) and goes past The Ferry Building (at Market Street), Fisherman's Wharf and Pier 39, ending at Pier 45 - a beautiful breezy walk with restaurants and shops along the water. The James Beard Award winning restaurant, Slanted Door, is located in the Ferry Building, shown above *See more on this restaurant below. 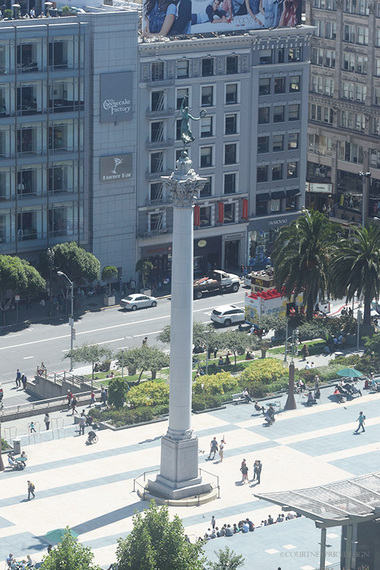 Shop Union Square - Union Square is a California Historical Landmark, named for the Union rallies held there during the Civil War era. Today Union Square is a major tourist destination, with no shortage of department stores, boutiques, upscale shopping, hotels, restaurants and theatre. 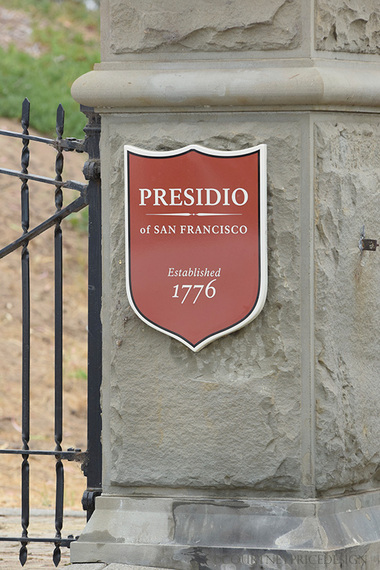 Presidio National Park - Take a beautiful drive through a forest in San Francisco, see a neighboring beach, a former military base. For 218 years the Presidio served as a military outpost for three nations. More about the National Park here. 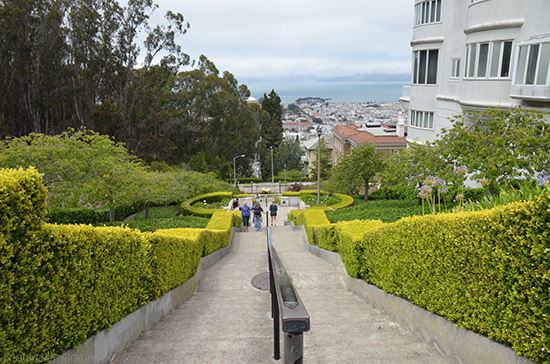 Presidio Heights - This prestigious neighborhood boasts incredible architecture, wide streets, enormous homes, sweeping views and lush gardens... well worth exploring when visiting the Bay Area. This is the neighborhood where the Mrs. Doubtfire house is. 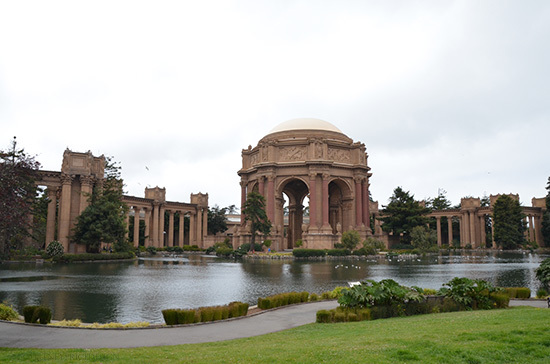 Palace of Fine Arts - Not far from the Presidio area, The Palace of Fine Arts in the Marina District is a monumental structure originally constructed for the 1915 Panama-Pacific Exposition in order to exhibit works of art presented there. One of only a few surviving structures from the Exposition, it is the only one still situated on its original site. It was rebuilt in 1965. 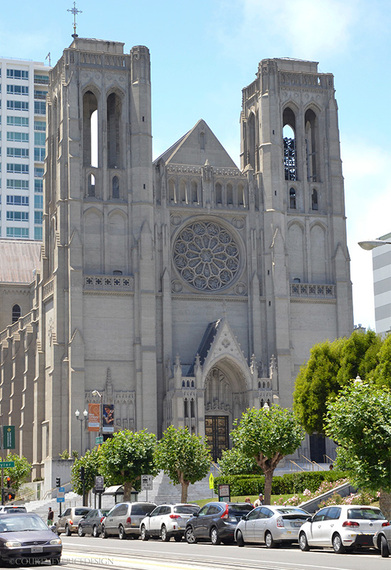 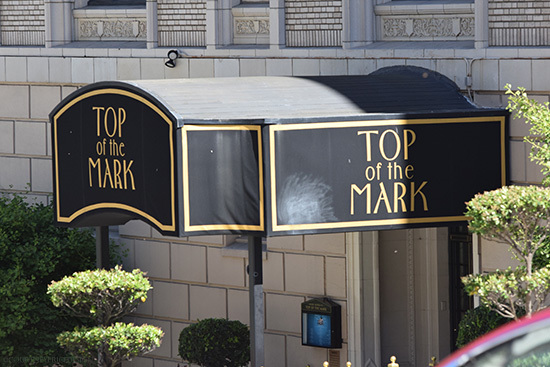 Take in the Views from Top of the Mark - For great views of the city, head to the rooftop bar at the Mark Hopkins on Nob Hill, located at the highest point of San Francisco. Popular for Sunday brunch, dinner or happy hour, this bar serves over 100 variations of the martini. The hotel was built on the site of the Mark Hopkins mansion, which burned after the San Francisco Earthquake of 1906. This hotel is one block from the Grace Cathedral. 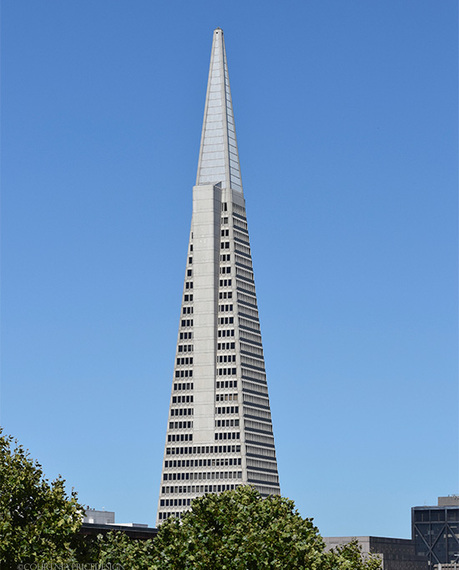 Transamerica Pyramid - The tallest skyscraper in the San Francisco skyline, which you will see from just about everywhere. Transamerica HQ has since relocated to Baltimore. 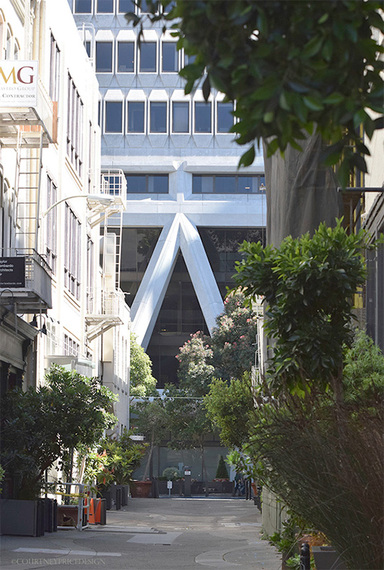 Charming alleys are worth exploring in this Jackson Square area. You might find a hidden restaurant or shop full of treasures, don't be shy about exploring - the architecture is stunning and the area is rich with history, much of it having survived the 1906 earthquake fires. The base of the Transamerica tower is in the background of this photo, to give you geographical perspective. 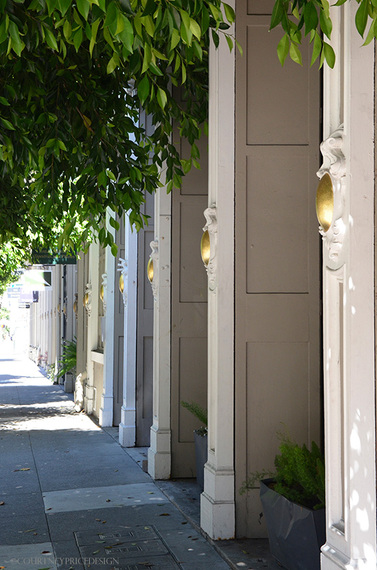 Experience a little Gold Rush history in the Jackson Square area. Note the plaques on the buildings for noteworthy historical landmarks in this area. The area is now home to law firms, restaurants and some amazing shopping if you like antiques and design:

Hedge - For one-of-a-kind modern and contemporary design, ceramics, and decorative objects by the likes of Rick Owens, David Wiseman, and Michael Boyd.

Peter Pap Oriental Rugs - Recognized internationally as one of the very top dealers in antique oriental rugs, carpets and tribal weavings. A true expert in the field, Peter appears regularly on the Antiques Road Show. Shop the very best at his store, visit and get advice from Peter himself.

Sarah Stocking Antique Posters - Amazing antique posters dating from the 1890s through the 1930s by the likes of Toulouse Lautrec, Pierre Bonnard, and Alphonse Mucha. Sarah has spent the past 30 years building her collection.

If you want to plan your shopping in advance, I highly recommend this great resource to preview the stores in the Jackson Square area and other areas of San Francisco as well.

While walking around the Jackson Square be on the lookout for Gold Street and Balance Street: they are two alleys that intersect, where miners used to come to weigh and sell their gold during the gold rush. *One of the recommended restaurants, Bix, below is located here. 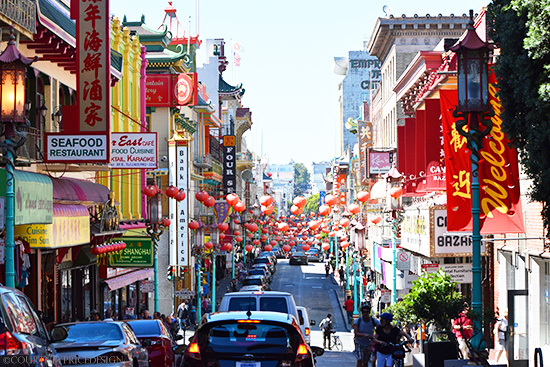 Chinatown - This is the oldest Chinatown in North America and the largest Chinese community outside of Asia. This microcosmic Asian world is the most densely populated urban area west of Manhattan. Always crowded and culturally rich, this is where you want to have your San Francisco dim sum experience, see dragon parades, herbal shops and pagoda roofs. Chinatown draws more visitors annually than the Golden Gate Bridge. 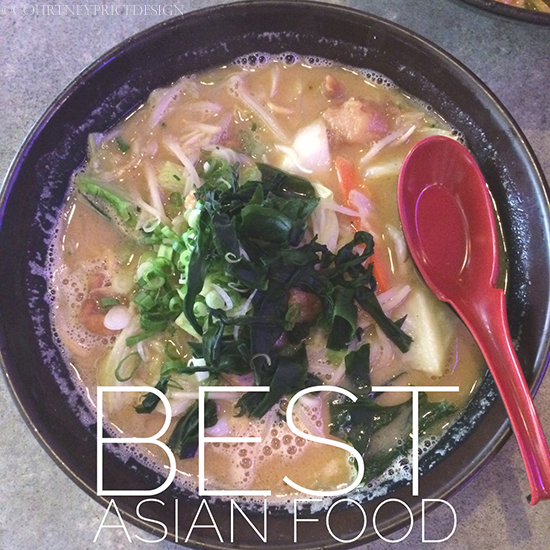 The Ramen Bar - A new restaurant in the Financial District, at the base of California Street, opened by popular chef Ken Tominaga. 252 California St, (415) 397-9222

R&G - A local favorite. Long lines are not uncommon, and the service is fast paced and can be somewhat impatient if you ware unfamiliar with the menu, but the food is good. 631 Kearny St, (415) 982-7877 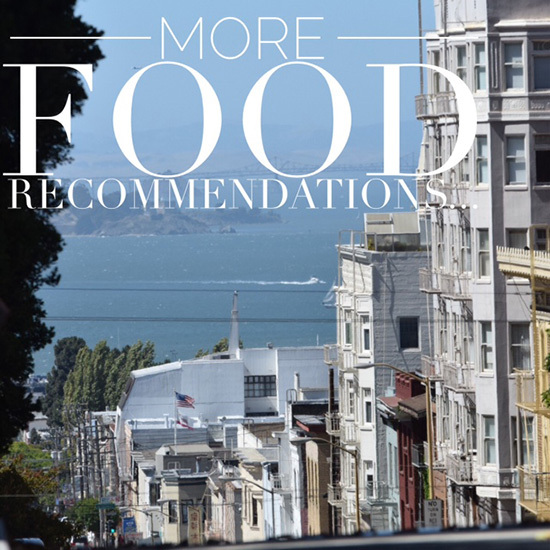 Bix - Located in the Jackson Square Area, right in the heart of Gold Rush History. Said to be THE quintessential San Francisco restaurant, Bix has appeared in numerous movies, TV shows and books. 56 Gold St, (415) 433-6300

The American Grilled Cheese Kitchen - In the SoMa District, artisan award-winning grilled cheese sandwiches. This restaurant was started by an MIT grad who won the National Grilled Cheese Invitational, and the rest is history from there... 1 S Park Ave #103A, (415) 243-0107 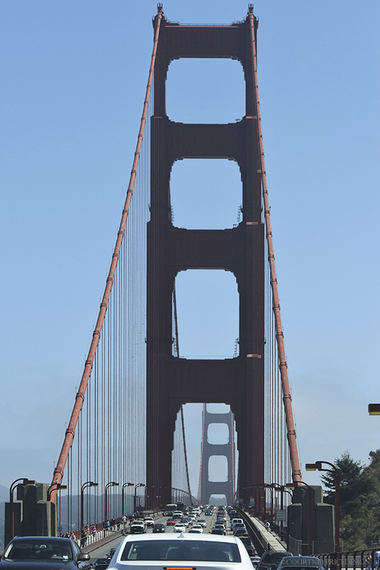 The Golden Gate Bridge - This 1.7 mile bridge was completed in 1937. Bike, walk or drive across it to experience of the most photographed bridge in the world, also the most internationally recognized symbol of San Francisco. Declared one of the Wonders of the Modern World, this bridge connects San Francisco to Marin County.

See more photos of San Francisco details and points of interest on Instagram, follow me there.
Do you have any other San Francisco favorites to add? Please share in the comments.