An excerpt from 'Visual Chronicles: Art in a literary content,' by saltfineart, Delia Cabral and Peter Frank. The exhibition is on view until September 30, 2012 at saltfineart in Laguna Beach, CA.

One picture, goes the saw, is worth a thousand words. But each word in fact contains several pictures. Writing is as much a pictorial as a literary craft; originating in hieroglyphs, written words emerged as stylized depictions of the things they connoted, and the traces of those depictions have persisted even in our phoneme-based alphabets. Information is information, and as we tell it we hear it and as we hear it we see it.

Every picture tells a story. But how do pictures tell stories today? A picture composed of letters - or, conversely, a book made into a sculpture, or a textile woven to be read, or even a painting whose image re-tells us a story we already know in a way we didn't know we knew - asks us to understand the "story" as a graphic event, a theater of the object or poetry of the image whose multi-dimensionality gives the imagination a tactile surface and unfolds the story over several kinds of time at once.

Artists can (at least figuratively) read braille and sign language and so many other stimuli besides. Their need to convey vast concepts and elaborate phenomena drives them to find and invent more and more expansive means of communication. The word is not enough. The image is not enough. The book is not enough. The Internet is not enough. The breakthroughs of the past, driven by an ideology of change and experimentation, paved the direction and built some prototypes, but today's artists want to crawl into the very impulse to language that drives human perception and bring forth some different, perhaps new sort of effect or concept or engine that rewires, and thus reveals, the mechanisms of meaning. And each artist in "Visual Chronicles" does so in a markedly distinct, and distinctive, way.

Luis Cornejo depends entirely on pictures, but his subversions of these pictures, and the expectations they trigger in us, conjure whole new accounts, whole new tales, fairy and otherwise. Similarly, and yet conversely, Matthew Heller's paintings relate narratives in subversive ways, allowing themselves to function as pages and, at the same time, pictures of pages.

Hilary Gruenberg, by contrast, fabricates pages of pictures, pictorializing whole books, invading and transforming their contents, presenting the book as its own artistic discipline. Susan Sironi takes this process a physical step further by regarding the book as a sculptural rather than merely pictorial site and cutting and gouging through pages to reveal topographic relationships.

Rebecca Lowry's objects consist not of pages or books but of recorded tape - a slowly vanishing medium that has bridged the analog and digital eras and represents the transmutation of the spoken word into physical, but ironically invisible, form. Guillermo Bert realizes the most dramatic conflation of old and new by translating ancient lore into up-to-the-minute QR codes - which are then woven back into indigenous form by the people whose lore it is (their textiles already remarkably similar to the increasingly ubiquitous codes).

These artists do not privilege the image, and/or the object, over the word. But neither do they subject visual practice to verbal. They regard the two realms of human expression as equal - and as congruent, the borders between their practice shifting and perhaps arbitrary. They don't simply work in between language and image, they work among language(s) and image(s). They have created animals of the soil and galloping plants, hybrids that have always been in human imagination - and, in this case, hybrids invented from what is already human invention. Our "visual chronicles" go back millennia; what is new here is not the idea of doing this, but what these artists have done, and how they've done it. 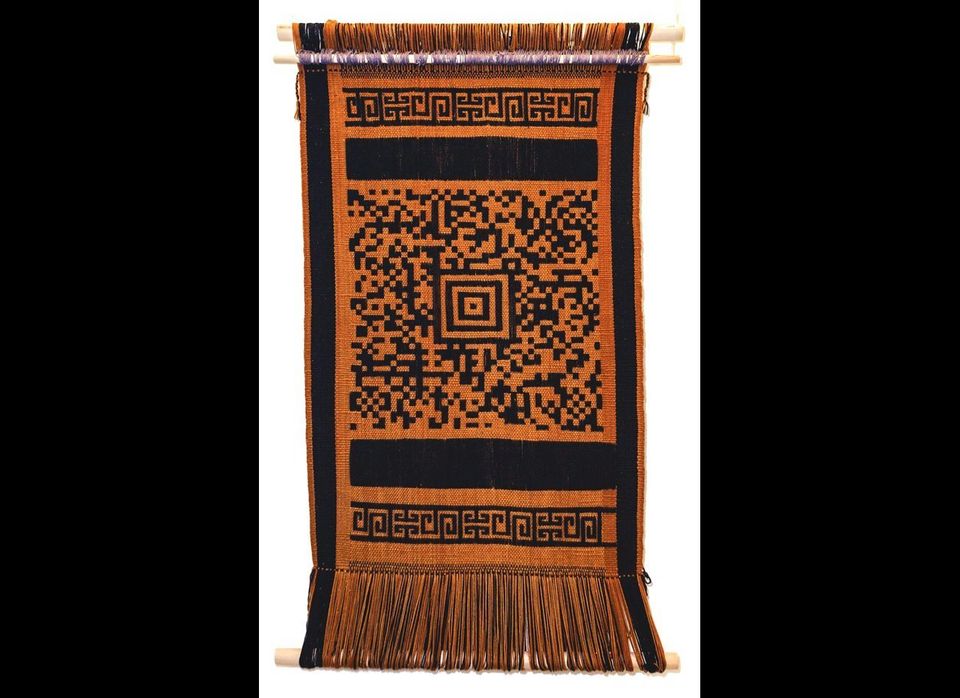 1 / 6
Guillermo Bert PSALM 1492 Based on a poem by Mapuche poet, Graciela Huinao From Encoded Textile Series 76 x 41 inches Textile woven by a Mapuche weaver from the South of Chile