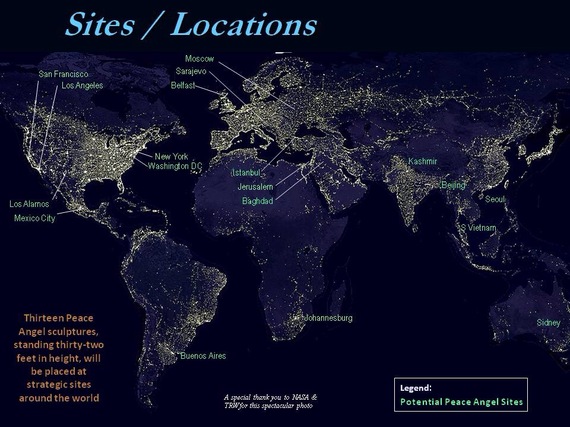 Peace Angels magnetize human dignity in order to overcome adversity. Formidable images prompt us to build a world where goodwill eclipses hostility. Our reflection is seen in the mirrored surface. We are reminded that our actions define our lives. We see ourselves in the reflection of the weapons metal and are reminded. 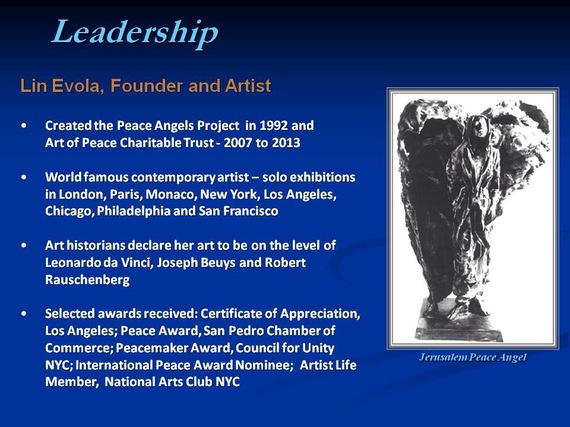 The Peace Angels Project is a movement to request weapons from the proper law enforcement agencies and government sources. This metal is used to build Peace Angel monuments that inspire a consciousness of peace.

The Peace Angels Project has strong technical requirements for weapons formulas to produce various surface qualities. Technical support has included several years of corrosion testing by the Getty Museum in Los Angeles and will include the Swedish Corrosion Institute in Stockholm, which tests metal corrosion for NASA.

Future technical support for weapons metal in the Art of the Peace Angels Project will include companies such as Kurdex Corporation in Silicon Valley. The technical development incorporates formulas and metal production in a multiple step process. Weapons metal transforms the vision from one of war to one of reflection.

Polich Tallix foundry in New York is the only foundry that has the high-level art skills, and the technology to use the metal mixes required to create the Peace Angel sculptures and monuments. Dick Polich has a master's degree in metallurgy. His artisans use the formulas to mix the proprietary metal compound to forge the art. Stainless steel, the fundamental metal used, is a ferrous metal. This compound metal was developed for straight line work. It is the opposite of the silicon bronze refined over centuries to be used for sculpture. To melt ferrous metal, sound furnaces, much higher in temperature are required overseen by specially trained artisans. Creation of a Peace Angel combines the historically proven process used by the ancient Greeks, the Renaissance sculptors and Rodin with new technology developed to mix stainless steel and weapons metals that do not corrode.

The monument in downtown Los Angeles is expected to incorporate approximately 100,000 weapons. These weapons are donated or confiscated and signify a pledge to build a productive and prosperous life of good conduct, good commerce and integrated worth. 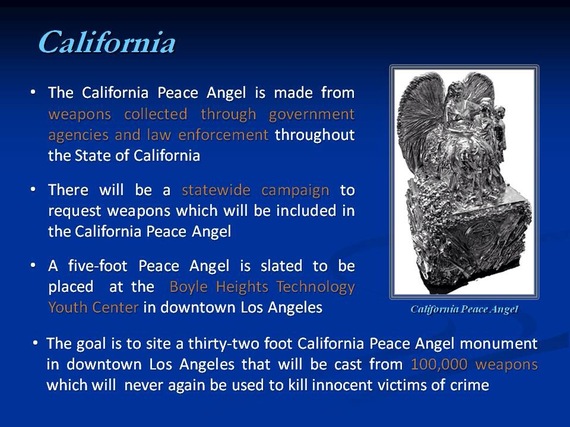 The Peace Angels are symbols of the possibility of living together in an integrated, growth-oriented society.

There will always exist a balance between peace and protection. This tipping point is where a sacred space exists to reduce or to neutralize the destructive nature of unresolved conflict.

The work of the Peace Angels Project includes garnering political and government support to develop sites which have meaning to the community. 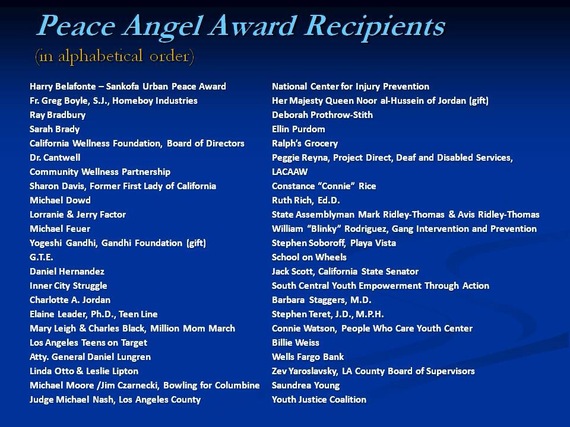 Humanitarian work of the Peace Angels Project is continued with the United Nations Department of Disarmament. It has been an honor and very enlightening to see the world at work in the Biennial Meetings on Small Arms & Light Weapons, the Programme of Action, and the Arms Trade Treaty. These closed meetings at the United Nations gave a serious view of weapons use globally and the multileveled misunderstandings and decisions that have led us to the world as it is now. Today, the best chance we have to overcome our differences is to offer each other mutual respect given with patience.

At the Arms Trade Treaty where every country was represented and over one hundred social justice organizations had representation, I listened to some of the finest minds discuss war, weapons, potential peace and law. I watched and I listened. 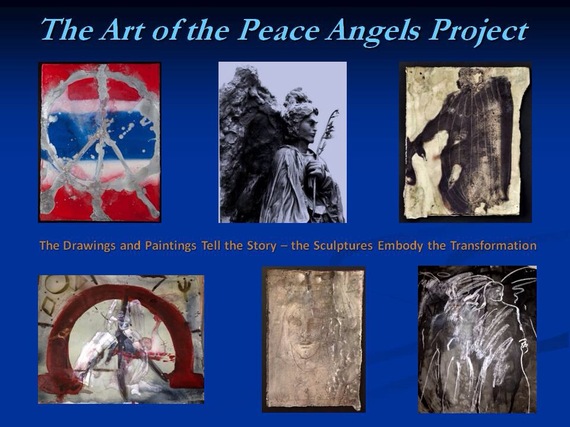 The Violence Prevention Coalition of Greater Los Angeles, founded by highly esteemed epidemiologist, Billie Weiss, is an educational network bringing together many of the finest community peacemakers on earth. Los Angeles, where 135 languages are spoken, brings together many cultures which brush up against each other on a daily basis. The heroes who work in the community are learning every day what makes peace in their neighborhoods - the microcosm of the global expanse. We may learn from them. This city, where my son was born, was the first city globally to step up to give weapons metal and a city-owned site for the first of the California Peace Angel monuments.

In California and in New York, we have been honored to build partnerships with distinguished law enforcement officials who have given us destroyed weaponry for the creation of Peace Angels monuments. Under the leadership of Los Angeles County Sheriff Leroy Baca and Los Angeles City Police Chief Charlie Beck, half of the state of California gave weapons metal in 2010 and 2011 for the creation of the California Peace Angel monuments.

In 2011 New York Police Commissioner Raymond Kelly gave NYPD weapons metal for the creation of a New York Peace Angel to be placed at One Police Plaza in front of the Joint Operations Unit. This is where counter-terrorism specialists engage to keep New York safe. 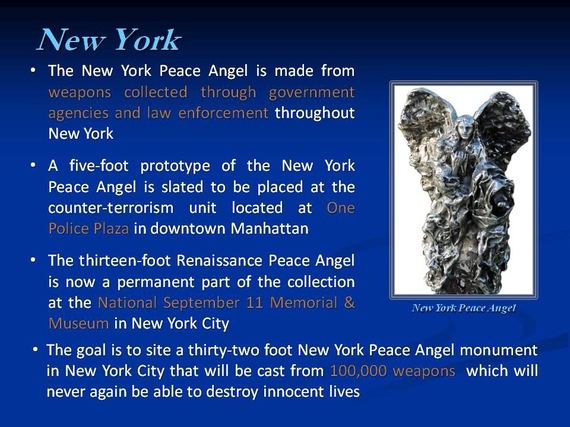 Patrons and artists go hand in hand. Always have. Always will. The relationship keeps the art world in order. It is a divine partnership based on a commitment to beauty that communicates, to future generations, the hopes and values of the past.

It was Joseph Pulitzer who in the early 1880s had the knowledge and boldness to lead a campaign which funded the base and the final stages of welding and installation of a sculpture called the Statue of Liberty. Through his newspaper, he requested donations to pay for the final efforts to complete the statue and base. In August 1885, the final $100,000 for the statue's base had been raised from American donors.

With the complex challenges before us, it will take our accumulated experience and perception to safeguard humanity.

We don't have the luxury of not getting along. By harnessing our global awareness, we have opportunities that can exist only if we combine our knowledge with our cumulated wisdom and use the information we have at hand to build a better world. Ecological challenges are forthcoming. We need everyone.

Every human being is descended from the winners of war. We trace ancestral grudges that come from generations past. Let us overcome these historic hostilities through discipline, education and moral compassion. We are, after all, related by the same ancestry from the origins of humanity itself. 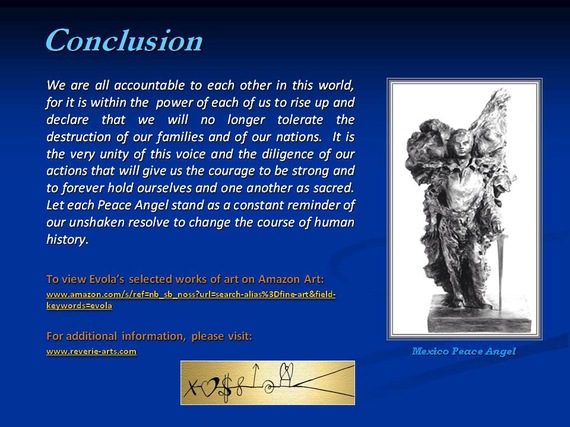 With the advent of technology and travel, our young people can decide to build a world with their neighbors, no longer dredging up grudges of the past.

It has been said that the Peace Angels touch a wordless place deep inside us. When this happens, walls fall away and space is created for life to begin anew. It is an amazing thing to experience, and it is profoundly moving to watch. Powerful Peace Angels. 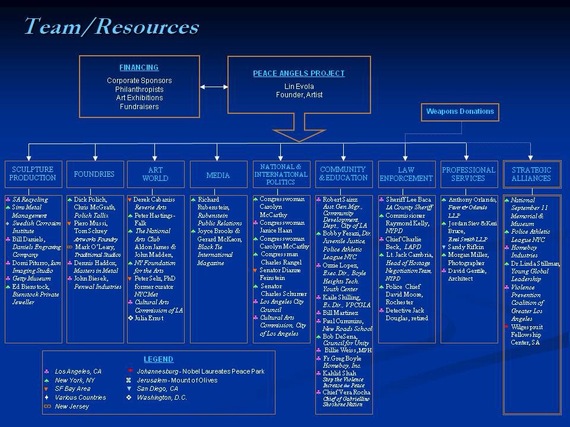