I spoke to Andeisha Farid yesterday in Washington yesterday, who was pleased to have just met Michelle Obama. Hillary Clinton then spoke about her in her speech.

Andeisha, founder of the Afghan Child Education and Care Organization (AFCECO) of Kabul, was in D.C. to accept the global leadership award at Lincoln Center from the important organization known as Vital Voices.

I first met "Orphans Hero" Andeisha Farid last fall when she was in town as part of Goldman Sachs' 10,000 Women Program. Vital Voices echoes that theme, with their belief that investing in women improves the world.

Brian Williams' met and presented a brilliant portrayal of Andeisha in his Making A Difference segment of the NBC Nightly News (video). See also my post (here).

Brian Williams has just filmed another segment about Andeisha on his NBC nightly news show, this time focusing on her award at the Vital Voices event. 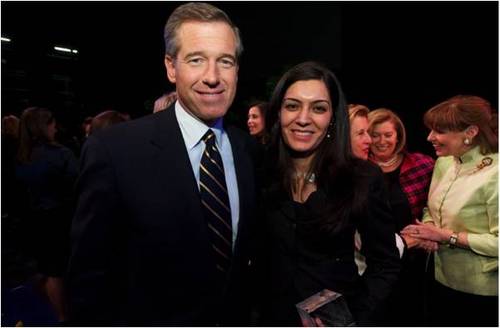 "I was very excited to meet the First Lady," Andeisha told me. "And I was so happy to receive such a prestigious award. The award encourages me to keep doing what I am doing."

"My message of acceptance," she said, "was that I could not have done any of it without Paul Stevers and CharityHelp International (CHI), or without the assistance of all of our volunteers from around the world, such as Ian Pound.

The Afghan Child Education and Care Organization in Kabul is supported by CharityHelp International, founded by entrepreneur Paul Stevers.

The Vital Voices event was a Who's Who of powerful women. Melinda Gates was also honored. Hillary Clinton and Diane von Furstenberg were among the many well wishers in the audience.

In her speech, Hillary mentioned Andeisha: "When we were listening to Andeisha Farid talk about growing up in a refugee camp, she said words that should stick with all of us: 'But I got an education.'"

Hillary Clinton, founder of Vital Voices, believes in women. So do many men.

I spoke this week to Peter Buffet who is working with Angelique Kidjo to promote girls in Africa. He feels that having men involved with women's empowerment is vital to it being seen as a human rights issue.

NBC's Brian Williams and New York Times writer and author Nicholas Kristof (Half the Sky: Turning Oppression into Opportunity for Women Worldwide) attended the Vital Voices event and likewise noted that gender equality is the central moral struggle of our time.

The mission of Vital Voices is to identify, invest in, and bring visibility to extraordinary women around the world by unleashing their leadership potential to transform lives - and accelerate peace and prosperity in their communities.

Vital Voices Global Partnership is the preeminent NGO that identifies, trains, and empowers emerging women leaders and social entrepreneurs around the globe, enabling them to create a better world for us all.

Their international staff and team of over 1,000 partners, pro bono experts and leaders, including senior government, corporate and NGO executives, have trained and mentored more than 8,000 emerging women leaders from over 127 countries in Asia, Africa, Eurasia, Latin America, and the Middle East since 1997.

These women have returned home to train and mentor more than 500,000 additional women and girls in their communities.

As former United Nations Secretary-General Kofi Annan once said, "To educate girls is to reduce poverty." The leadership of this Washington-based organization are truly the Thought Leaders and Vital Voices of our time.

Andeisha Farid and the Orphaned Children of Afghanistan (HuffPo)

CharityHelp: An Electronic Bridge to Kids in Need (HuffPo)