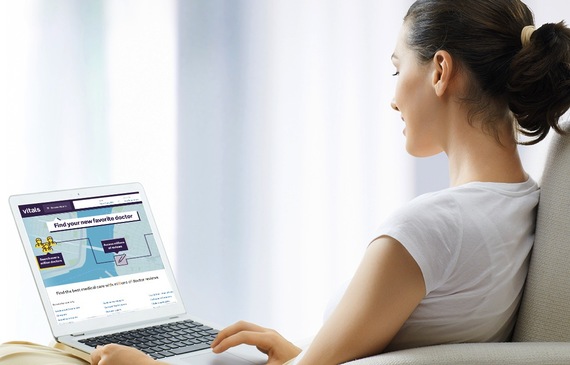 Entrepreneur Mitch Rothschild says he has always followed a simple philosophy: Determine where a gap exists and launch a business to fill it. He thought information was seriously lacking in healthcare, for both patients and service providers. So he founded Vitals in 2007 to offer a suite of information and analytics tools to help consumers, providers, and health plans better track healthcare prices and quality. Today he serves as the company's executive chairman.

Each month, some of Vitals' 10 million users perform 250,000 searches at Vitals.com, seeking information about the U.S. healthcare system, where they can browse 5 million user reviews of about 890,000 medical practitioners. Vitals' business-focused software-as-a-service side meanwhile offers Web tools and analytics for healthcare providers, helping them improve workflow, attract customers, and foster loyalty. Finally, Vitals provides a platform for health insurers to connect with patients, steering them, it says, to cost-effective, quality care.

In simple terms, Vitals hopes to be a Priceline of sorts for an industry in which costs can be opaque and consumers often feel powerless. "We hope to bring price transparency to healthcare," says Rothschild. "In the process, we want to align the interests of health plans and their customers."

At Vitals' heart is what Rothschild calls "intelligent information," made possible by search technology, which he calls the "alchemy of our age."

To arm people with knowledge to help them make sound medical-care decisions, Vitals first mapped the U.S. healthcare system, creating a taxonomy of hospitals and medical-care providers. It pulled data from state and federal databases--such as those at the Centers for Medicare and Medicaid Services and the Centers for Disease Control and Prevention, lists such as New York Magazine's annual ranking of top doctors, and a host of other sources.

Vitals then developed algorithms to match patients with providers. Users can find ratings for doctors (and their staff--receptionists come in for some tough criticism on Vitals, something Rothschild says is useful because it speaks to the way offices function), track wait times, and learn about outcome and mortality rates. These ratings are not unlike those at Amazon and Yelp. With approximately 900,000 providers in the U.S. healthcare system--and 1.3 billion patient visits a year, according to the CDC--there's plenty of room for the database to grow.

"Healthcare providers don't have strong consumer brands, and they're not great at marketing their strengths," understates Rothschild. "Their customers don't tend to have emotional connections with them." So Vitals developed a suite of services for providers--from monitoring and managing their reputations to attracting patients and facilitating workflow--that they could use to improve the consumer experience and forge greater loyalty. In return, Vitals gains access to more data.

"We became a sort of a front door to the Web for them," says Rothschild. "They don't know how to do doctor finders or create online appointment systems. Consumer sites such as Orbitz and OpenTable discovered long ago how to leverage data to create a fluid and easy-to-use experience. But healthcare is 10 years behind everybody else."

What sets the industry apart from others, said Rothschild, is that people have to "log in" any time they're using it. A person searching online to find a doctor or to learn about an ailment typically leaves a trail that can be picked up when they make an appointment, receive treatment, or file an insurance claim. This stands in contrast to a consumer who may shop at a brick-and-mortar store and later buy at Amazon (or vice versa), leaving one phase of the transaction untraceable.

"It's a closed loop," said Rothschild, "one we realized offered amazing potential. Healthcare is a quirky industry. We understand it." Vitals aims to increase the percentage of people who shop online for healthcare care, today only about 2 percent.

People who use Vitals' SmartShopper system get a cash incentive to comparison shop for healthcare. For anything from a blood test to major surgery the patient can research cost and quality ratings for various providers. The absurd price disparities in American healthcare are among its worst and weirdest features. For example, a brain MRI ranges from $209 to $5,560, according to Vitals. A mammogram could be $23--or $1,929. A patient whose insurer is a Vitals partner is eligible for a rebate based on the amount saved by selecting a procedure that is cheaper than similar offerings. Obviously such a system has perils, if lower costs accompany less-rigorous medical procedures. But Rothschild insists his system does not compromise quality.

The company claims that in 2014, every $1 SmartShopper paid to patients generated savings of more than $8 for partner health plans. The largest savings were related to colonoscopies, MRIs, and physical therapy. Overall in 2014, Vitals says it saved $10.7 million in procedure costs for its partners. It paid $1.3 million in cash incentives to 16,076 patients, an average of about $83 each.

Sounds good so far. But Vitals' approach has its critics. Niam Yaraghi, a fellow at the Brookings Institution's Center for Technology Innovation, questions the effectiveness of such an approach. "Transparency is the building block of a competitive market," he said. "But what works in most markets doesn't apply to healthcare, because it isn't truly competitive. Patients aren't customers in the common sense of the word, and don't have much real choice. More importantly, they have very little expertise to judge or evaluate the quality of medical services when they attempt to do so. Reviews based on what other patients have seen or felt don't necessarily reflect the real quality of care."

I asked Rothschild to respond. "Choice is what creates markets," he said, emphatically. "Providing relevant, accurate cost and quality information about providers allows patients to make intelligent, informed, competitive decisions. Higher-priced providers will need to lower costs to be competitive. Poorly rated providers will need to up their game. That is the definition of a competitive market. Shame on those who choose to measure progress in this area on a lofty, idealistic view of markets. Just because the current state is not perfect, it doesn't mean progress is lacking. The last two years have seen major strides--health plans opening up [about] out-of-pocket costs to consumers in advance of care; millions of patient ratings being collected and viewed; surgical societies posting outcome measures of their members; and free-standing medical facilities charging way less than their hospital counterparts for comparable quality services. Instead of cursing the darkness, industry watchers should be looking at all the candles that are being lit."

Services such as Vitals may make sense for some groups but not for others--and it may be tied to income level, education, and location. It's clear most consumers are anxious to use the Web to research big-ticket purchases, vacations, etc. Many of us get specialist referrals from primary care physicians we trust. But not everybody has such a longstanding relationship. This may be especially true in regions that are not densely populated, where options are fewer. Another group that might benefit are those who go in and out of having insurance because of job volatility or other issues in their lives, and thus who don't build steady relationships with medical practitioners they can turn to for advice.

Vitals doesn't advertise, depending instead on user evangelism for growth. One hurdle, said Rothschild, is that looking for a doctor isn't as appealing as searching for a cheap flight or a hotel--things people look forward to doing. To create a positive user experience and nurture its brand, Vitals seeks to mimic the look and feel of top consumer sites. "We serve as a sort of traffic cop in the healthcare system," said Rothschild. "And we're serious about being America's healthcare brand."

Vitals seems thus far to be charting a successful course, and to offer something of value. But it may be a long time before its numbers get big enough to be game-changing in American healthcare.