Vitaly Raskalov is no stranger to running into trouble with the law.

After all, the Russian skywalker has already been detained by police at least once before after he was caught climbing the 1,000-foot-high Russky Island Bridge. However, in his latest escapade, Raskalov managed to avoid a run-in with the authorities -- at least for now.

Climbing to the top of Egypt's Great Pyramid of Giza, Raskalov and his team captured some truly spectacular aerial photos.

The Great Pyramid of Giza and several other tombs on the plateau near Cairo were reopened to the public in October following a restoration project, yet climbing the outside of the pyramid is still considered illegal under any circumstance.

The law prohibiting tourists from scaling the walls dates from 1951 but was rarely enforced until decades later, following a slew of accidental deaths, according to an archived article in the Bangor Daily News.

Raskalov explained in a post on LiveJournal, that he and his crew waited until visitor hours were over to begin their ascent, making sure to avoid the view of security guards on their way up and down the pyramid.

The Great Pyramid of Giza, the largest of Egypt's ancient pyramids, originally stood 481.4 feet tall and took nearly 30 years to construct. But throughout the centuries, the massive structure has lost some of its limestone, and its height has reduced to about 450 feet.

Check out the spectacular photos taken from the top of Egypt's Great Pyramid in the gallery below.

CORRECTION: An earlier version of this article stated that Vitaly Raskalov took the photos. It has since been updated with the correct credit for the photographer. 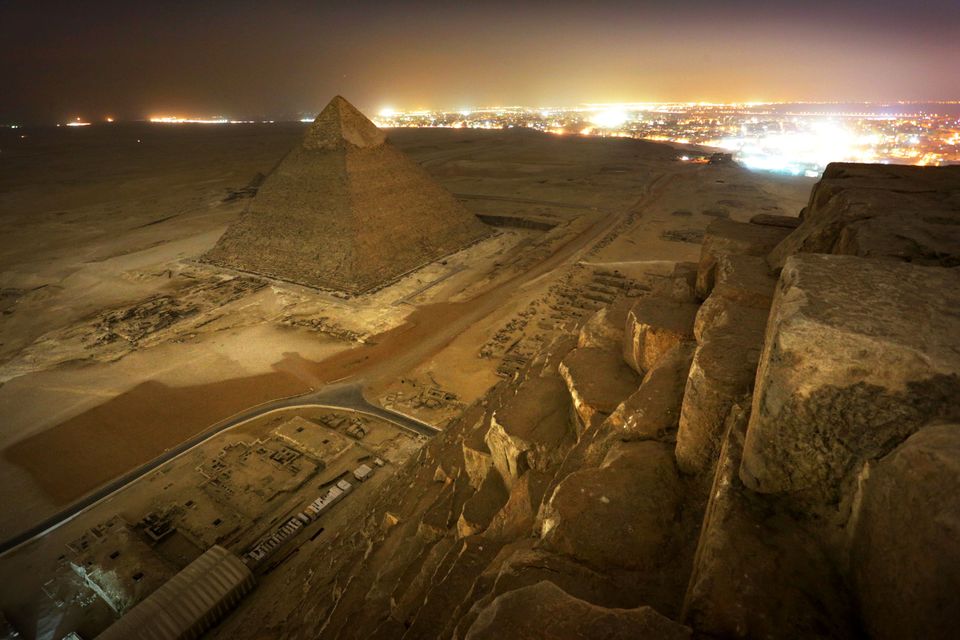 1 / 15
A group of tourists take photos from the top of Egypt's Great Pyramid without permission.
Vadim Mahorov / Caters News