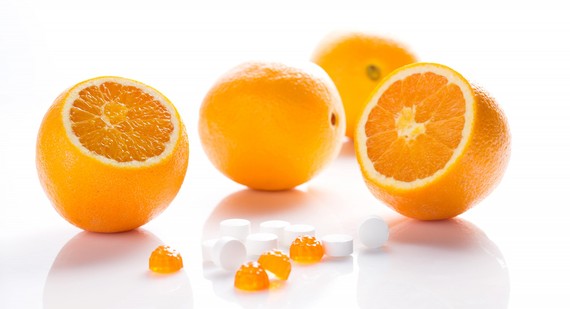 When you're starting to get sick, few things are more comforting than chicken soup, calls from mom, and a huge bottle of vitamin C.

The orange-flavored supplement may seem innocent enough, but inside is tons of immune boosting agents that always somehow help to clear up that stuffy nose, sore throat, and crippling lethargy before it even kicks in. So, what exactly is in those magic vitamin C tablets and what could it be doing for your body if you took it on the regular?

What does vitamin C do?
Vitamin C, also known as ascorbic acid and ascorbate, is a water-soluble vitamin. This means that the body can't store it, so it must be obtained through foods or supplements taken on a daily basis to reap all the essential benefits. The body continually needs vitamin C since it's responsible for a number of vital functions, including:

Vitamin C deficiencies matter
Though severe vitamin C deficiencies are uncommon, many doctors believe that the majority of the population doesn't get enough of the potent nutrient in their diet. Smokers are also at an increased risk for a deficiency since tobacco use naturally cuts into stores of it. Even a small unbalance matters and can lead to a number of symptoms, including:

High blood pressure
Stroke
Cancer
Gallbladder disease
Atherosclerosis
When vitamin C deficiency is severe, a condition can develop called scurvy. It presents itself in otherwise undiagnosable symptoms of bleeding gums, bruising, swelling, and fatigue. The disease was common in the 18th century with pirates who would go months without eating produce, and some say it's making a comeback, which is why it's so important to maintain a daily intake of vitamin C.

Vitamin C benefits
There isn't just one body system that benefits from having optimal levels of vitamin C. Everything from your skin and nails to your heart, eyes, and brain can reap the rewards.

Vitamin C is a powerful antioxidant, which means it's your best friend in tackling that bully known as aging. Antioxidants increase blood flow and are the frontline warriors that destroy free radicals, or the harmful substances that come from being exposed to smoke and toxins in the air. When free radicals build up, we age more rapidly and have a greater risk for contracting unwanted diseases like cancer and heart disease.

Strokes are the fifth leading cause of death among Americans and the second leading cause of death globally, according to the Centers for Disease Control and Prevention. But, up to 80 percent of strokes are preventable by making simple lifestyle changes like having a daily dose of vitamin C, which has protective effects for artery health. Some research has even shown that vitamin C can help to slow down the rate at which arteries harden, reducing the risk of atherosclerosis and heart attacks.

The sneezing, the coughing, the runny nose. If only the common cold wasn't so common. But, the good news is that vitamin C has actually been proven to cut the duration of a cold and its accompanying misery between 8 and 14 percent. Your best plan of attack is to start a course of vitamin C when you feel symptoms kicking in instead of waiting until the last minute.

Though zinc is often the favorite supplement to repair scrapes and cuts, vitamin C can also put a bandaid on the situation. It assists the body in making collagen, meaning it can actually speed up wound healing and even soothe painful burns.

"TAKING A SUPPLEMENT WITH AT LEAST 300 MG/DAY OF VITAMIN C APPEARS TO HELP PREVENT CATARACT DEVELOPMENT." -- THE AMERICAN OPTOMETRIC ASSOCIATION

Many in the health community are opening their eyes to the benefits of vitamin C for decreasing cataracts and slowing the progression of age-related macular degeneration (AMD). The American Optometric Association reported on one such study that found that women who took vitamin C for a decade or more had a 60 percent reduction in the risk of nuclear cataracts. Delaying the onset of cataracts by 10 years can also ward off cataract surgeries.

The well-documented Age-Related Eye Disease Study (AREDS) also found that a mixture of vitamin C, beta-carotene, vitamin E, and zinc has the ability to slow the progression of AMD by 25 percent and slow the loss of visual acuity by 19 percent -- an important statistic since AMD is the number one reason behind vision loss in America.

"DID YOU KNOW EVERY MEDICAL TEXTBOOK, AT LEAST UP UNTIL A FEW YEARS AGO, INDICATED THAT ONE OF THE MOST COMMON EFFECTS OF INADEQUATE VITAMIN C IS DEPRESSION?" -- DR. HUGH D. RIORDAN

If you're feeling blue, it could be related to a vitamin C deficiency, which is a known cause of depression. That's because vitamin C aids in neurological function and helps to regulate the stress hormone cortisol.

The late Dr. Hugh D. Riordan, a renowned clinician and researcher with the University of Kansas, saw the effects firsthand in one patient who was tired and struggling to function. After checking her vitamin C levels, Riordan found she didn't have any in her system and prescribed her 500 milligrams daily. "In a couple of weeks, she thought a miracle had occurred," he said. He had advised checking vitamin C levels as soon as a bout of depression sets in.

Losing steam at the gym can be common, especially for those just getting back into a routine. But, taking vitamin C can help to promote sustained and healthy exercise. A study published in Nutrition found that vitamin C supplementation reduced fatigue and the rate of perceived exertion and heart rate, which means you can work out without feeling burned out by the end.

If you're looking to boost your libido, vitamin C is a proven trick. Biological Psychiatry found that high doses of time-released vitamin C resulted in more activity, up from four to 14 times a month in most participants.

"HIGH-DOSE VITAMIN C HAS BEEN STUDIED AS A TREATMENT FOR PATIENTS WITH CANCER SINCE THE 1970S." -- THE NATIONAL INSTITUTES OF HEALTH

Cancer is a reality that many Americans face. However, the University of Maryland Medical Center found that populations that regularly consume foods loaded with vitamin C show lower rates of cancer overall. This even applies to breast, cervical, and skin cancer, which have become increasingly common. Additional research has also discovered that vitamin C, in combination with anticancer therapies, may block tumor growth for certain types of cancer.

Vitamin C for skin
There's a reason why vitamin C is packed into serums and beauty products like this facial cleanser and eye cream. The nutrient encourages collagen production, which keeps skin supple and free of wrinkles, sagginess, and other signs of aging. Whether eaten in your food, taken supplementally, or applied topically, vitamin C can actually help improve the texture, tone, and look of skin over time.

You might call vitamin C nature's drug since it's packed into a number of whole foods including:

Carrot Creamsicle Smoothie
Packed with orange juice and carrots, you'll get hearty doses of vitamins C and A when you start your morning with this super sweet drink.

Tropical Green Popsicles
Mangoes and spinach are the star ingredients of these frozen treats that are a refreshing way to cool down in the summer. Coconut water and banana add the perfect finishing touch.

Kale Caesar Salad
Caesar Salad gets a healthy makeover with this simple dish that starts with a bed of vitamin C-rich kale. Even better, the dressing is dairy-free.

Broccolini Salad
Broccoli and its cousin broccolini are one of the best sources of vitamin C, with 220% of the daily recommended value in just one serving. Try out this salad for a different way to enjoy the vegetable. With pepper, chives, and garlic, it gets a spicy kick.

Supplements are another way to reap the benefits of vitamin C, though they will have different effects than getting the nutrient from natural food. Vitamin C supplements are available for both adults and children. And also come in powder form.

The University of Maryland Medical Center recommends that 90 milligrams for males and 75 milligrams for females is sufficient. You'll want to check with your doctor on specific dosages, especially for children.