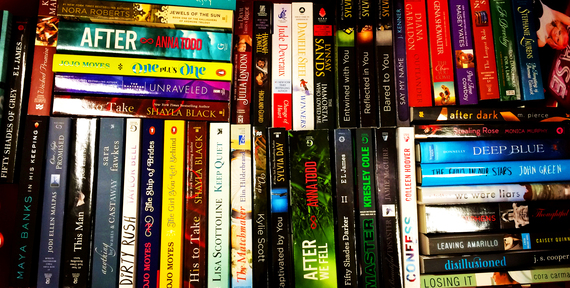 Are erotica and romance, as literary genres, inherently misogynistic? The question is highly debatable and the answer depends on a multitude of factors as diverse as the genres themselves. But the easy and honest answer is that, yes, they probably are. And not because erotica writers have so deeply absorbed the pathos of the patriarchy that they can no longer be objective, but rather because the tropes of the genre tend to be best expressed between an alpha and an ingénue. Despite being replayed to the point of exhaustion, these archetypes are here to stay and they consistently outperform any other potential players in romance and erotica today.

Are we then to assume that women who write smut are contributing to a sexist narrative? One that implies a heroine's life becomes complete only once she snags the hero -- where the worth of the leading lady lies in securing her position alongside her male counterpart? It's not to say that there aren't feisty heroines or leading ladies kicking butt, because plenty exist and usually are embraced by readers. Yet even in these slightly more girl powered novels, the female protagonist ultimately still functions more as a hole than a whole, a heroine who loves to deep throat but lacks any non- sexual relationship with that adjective. The dynamic then raises the question: if women write these storylines for other women are they not reinforcing bad stereotypes?

Herein lies the clincher; it's women who write these stories for other women.

Love it or hate it, ever since the advent of the e-reader and the phenomenon of E. L. James' 50 Shades of Grey, the romance and erotica genres have undergone a veritable explosion in popularity, most notably in the self-publishing arena. If the genre was huge before, today it is seismically huge. Now more than ever, women are reading erotica, and likewise, more women are writing it. The demand for readily available smut has created a huge marketplace and in response women have answered the call. (Not to discount the men who are an important part of the industry as well, but they remain in the minority.)

The culture of the community is not unlike the sentiment of The Bunker Babes when they stood behind and encouraged E. L. James in her quest to publish what had started out as fan fiction. In an ambiance of good will and generosity those original fans offered their support as she navigated uncharted territory. How do indie authors get started today? By word of mouth and recommendations from the other authors, bloggers and readers who generously promote them. Despite the recent boom, where romance and erotica take up more space on best-selling lists than any other genre, a benevolent and kindhearted environment still reins. An environment where women helping other women is a matter of course, because we're all players in this enormous estrogen-powered game. From publicists to bloggers, from editors to cover designers, from agents to publishers and without a doubt -- from writers to readers, we women are the great majority. We create both the supply and the demand, and we do it pretty damn harmoniously. In what other major industry are women so fiercely dominant?

So while our fictional female characters may lean toward submissive, the real, hard-working women behind them are anything but. We are a powerful community of women who are supportive and closely knit. We are readers, bloggers, fangirls, editors, designers, agents, publishers, publicists and writers who feel passionately about what we do and take our genres and its fans very seriously.

Call it what you will, whatever sticky moniker that's been tossed around, from Bodice Rippers to Mommy Porn to good, old-fashioned Smut; there's not a name you can call it that will diminish its value. So maybe we write our men a little too alpha and maybe we like to see them stand up for the heroine and become a true hero. They're our fictional characters so we'll write them however we like; be it the billionaire boss and his secretary, the rock-star player and the shy virgin or the bad boy next door with the preacher's daughter. But within the fictional world begins and ends their domain because these heroines and the women who create them look nothing alike.

Women who work in romance and erotica don't need an alpha male to come to their rescue -- when push comes to shove we stand up for one another. That's enough girl-power to inspire a bunch of real-life heroines. #vivalasmut!