Eagle eyes watching MSNBC today would have espied Hillary Clinton's communications director Howard Wolfson on the split screen with NBC's Brian Williams, anchoring the 1pm hour — and noticed something familiar beneath his coat: The Sweater! You remember The Sweater, Wolfson's brazen fashion choice on the night of the New Hampshire primary as seen on MSNBC, worn in belated celebration of the Christmas holidays or just because he likes festive patterns, but duly noted either way by pundits and pols alike, accustomed to seeing the muted colors of business casual opining on the airwaves. The Sweater was a bold fashion choice to start with, but it was even bolder still of Wolfson to make it his signature look. His lucky sweater perhaps? We decided to ask, figuring that Wolfson probably isn't very busy today. So we did! And our hunch was confirmed: Wolfson very kindly wrote back and confirmed that yes, he was wearing it again for luck. "It proved lucky in NH -- I wore it in NV and we won," said Wolfson via email. "I didnt wear it in SC."

Amazing how the fortunes of great nations rise and fall on the whims of a single woolen garment, but such are the vagaries of elections and life. With a race as close as the Democratic primary contest is shaping up to be, you never know — the sweater might just tip the balance. Behold it in all its glory below, from its original debut in New Hampshire and again from this afternoon. Good luck, little sweater! May your Tuesday be super. P.S. In order to be fair and unbiased, we are also wishing good luck to David Axelrod's mustache. 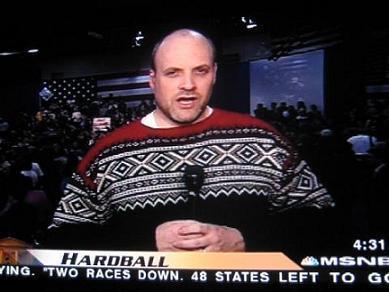 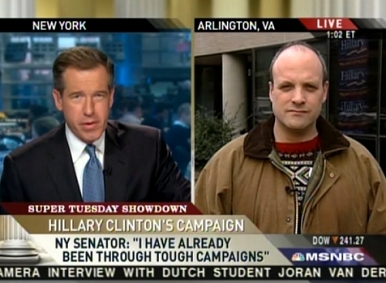 Related:
If You Want To Destroy My Sweater... [ETP]