It's been twenty years since the aliens attack movie "Independence Day" became one of the all-time summer blockbusters. Director Roland Emmerich is back for an update with "Independence Day: Resurgence," to be released June 24, 2016, with most of the original cast returning. In an interview, Vivica A. Fox (Jasmine) said making the new film was "like a wonderful high school reunion. And she talked about where her character is now, how changes in technology affected the filmmaking, working with Donald Trump on "Celebrity Apprentice," and what finally made her (briefly) lose her temper on the set of "Kill Bill."

In the first film, Jasmine was a single mom working as a stripper. She was devoted to her young son. Where are they now?

He's grown up now and so has she. She's no longer working at the pole, no longer a stripper. I was thrilled about that. I was like, "Please don't have Jasmine 20 years later still be up in the strip club trying to work for tips, okay?" Because if you remember that day she was dancing, she was in the club. I was like, "Why does she go to work?" It was an invasion and she's dancing for three hours, but hey, she's a dedicated worker. {laughs} So she has evolved and she's now a hospital administrator and she still has a wonderful relationship with her son. She is mentoring him to step in the shoes of her husband. He wants to be a fighter pilot. So there she goes sending off, sacrificing maybe, yet another love of her life. And that's how I always played the character. She says, "Son, do this," but inside it was breaking her heart. She wants him to be his own man but whoa, here we go again. "I hope I don't lose another one."

And you had some more action in this one, right?

Yeah, lots of running. I've got a battle scar right here on my leg. In one of the scenes I ran into one of the light bulbs there. I just fell and toppled over and laughed at myself and they are going, "Are you okay? I just said, "Come on, I did Kill Bill." I survived Kill Bill. I grew up playing basketball, volleyball, and track and I was a cheerleader so I was always an athlete. I know how to use those muscles and how to take a hit and get up and shake it off and keep it moving. I've always been little bit of a tough chick but I think that was because I was a tomboy. I had two older brothers. My older sister was five years older than me so there was a big difference until we got older and I started liking girl stuff. So fitting in with the boys I got put in wrestling moves, I got beat up, I learned how to play basketball. And Bruce Lee made me want to make movies.

So I was always a tough girl but I think it surprised people in Kill Bill how brutal the fight scenes were. I literally went from a size 10 to a size 2. Because all we did was work out; I thought we were training for the Olympics. That was commitment. Trust me. I felt it when we were doing those fight scenes. I felt like I was black Carrie because he was just like: "Blood -- now spray her. Blood -- now spray her, blood...." I remember I got mad at my makeup artist like, "If you put one more drop of..." and she goes, "Quentin asked for it." I'm like, "Oh, okay."

So when this came about I made sure that I got back into that mindset because I had this one scene that's a lot of running and a heroic moment. I was covered in bruises again but I was proud of it. My stunt double wasn't too happy with that; she's like, "I'm over here! I can work. They hired me." I'm like: "I've got it!" There's nothing worse then when you go to a film and you can see where the stunt double comes in. 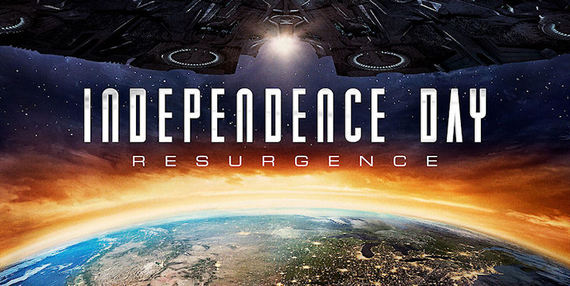 How does it feel to see the man you worked with on "Celebrity Apprentice" look like the Republican nominee for the Presidency?

The gentleman that I met when we did Celebrity Apprentice is nothing like the jerk who thinks he can buy his way and finagle his way into the White House. The things that he says about women and other nationalities, he has no filter. Imagine this guy going somewhere and not liking the way someone talks or the way they smell. That's what I love about Obama, he's always graceful under fire. I am heavily politically involved. I have been campaigning for Hillary; I am with her, absolutely.

There have been enormous changes in the technology of movie-making and special effects since the last film. How did that affect this production?

The biggest difference was that in the very first film there were a lot of exteriors. I remember filming on salt flats in and it was like 105° with the sun was reflecting off the salt and it felt like it was burning your eyes. So this time we had six soundstages in beautiful Albuquerque New Mexico.

That was awesome. They would show us what it was going to look like and we had to imagine it was all around us. I had this big scene where it was all animated so I knew exactly what was going to happen. I thought that was so cool. Another big difference is that Roland's accent is not as thick! With the first one, I thought he was telling me to chicken the gate. Finally one day I worked up the courage to go - what's chicken in the gate? This time it was easier to understand him. But he is the same kind-hearted, dedicated young man. This is the genre and he is the king of the genre.

What can you tell me about "Independence Day: Resurgence?"

There are some wonderful moments that you will appreciate like: "Oh wow. Here we go again. The moonwalker machine was so cool I'd love to have that for transportation in LA if I could. I just want the whole family to go away from this film saying, "Wow, what an experience -- I want to see it again!"