This article comes to us courtesy of SF Weekly.

While you all have been lazily basking in the sun this summer, this 8-year-old girl has been working her tail off to change the world, one lemon at a time.

In the northern city of Fairfax, Vivienne Harr has spent the last 57 days of her summer vacation turning lemons into lemonade -- literally. She's been selling the sweet refreshing beverage with plans to use all her proceeds to fight human trafficking across the world.

As of Saturday afternoon, the young entrepreneuer had already earned more than $30k at her makeshift business, which she appropriately dubbed Make-A-Stand! Lemonade: The Sweet Taste of Freedom.

She plans to keep selling lemonade until she raises $150,000, using only fair trade lemons, of course. '

"And it's really hard to find fair-trade things. I mean, we're buying fair trade things because, I mean, you can't be freeing slaves and having them to work harder for the cause that you're trying to do to help them be free," Harr told reporters.

Initially, she was charging $2 per cup of lemonade (rasberries optional) but as business boomed, she decided to leave it up to her customers to pay whatever they wanted to in exchange for a delightful glass of lemonade.

"We're betting on the goodness of people, and we found that the average price went up $18 when we made it free," her dad said. "We said, 'Pay what's in your heart.'"

Every dime is going to the Half Moon Bay-based nonprofit called Not For Sale, whose mission is to fight human trafficking and modern-day slavery around the world.

If you can't make your way up to Fairfax to buy a cup of lemonade, feel free to kick in for Vivienne's cause here.

You can also read about Vivienne's experience in her own words. Here's a few excepts: 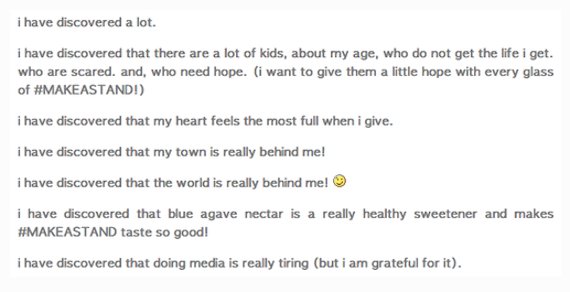 For more on Vivienne's story, watch the ABC News video below:

Vivienne Harr, 8-Year-Old Girl, Raises $30K From Lemonade Stand To Fight Human Trafficking (VIDEO)
40 Amazing Teens of 2011
1 / 40
Kicker Queen
Until recently, Community Christian required girls to wear a dress to the annual homecoming game. So in order to accommodate sophomore <a href="https://www.huffpost.com/entry/katie-davidson-female-foo_n_1117097" target="_hplink">Katie Davidson</a> as both a female member of the homecoming court and a star kicker on the football team, the school updated its official homecoming regulations to allow the girls to wear football uniforms.