This is the official portrait of the Minister of Culture Vladimir Medinsky, he stands with an ax in the park Kuskovo. 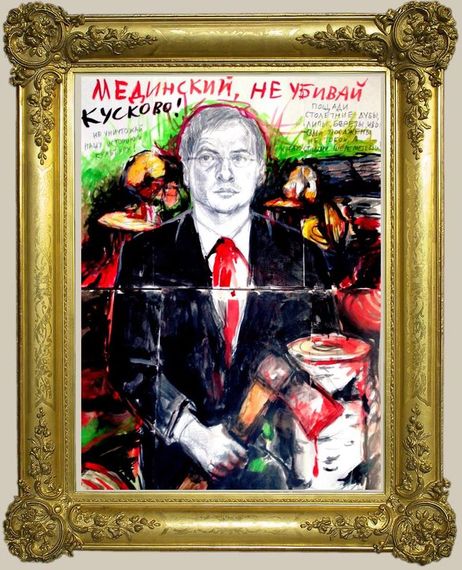 The official portrait of the Minister of Culture Vladimir Medinsky by Lena Hades.

"Deus conservat omnia" is the motto on the coat of arms of Count Sheremetev, it means "God preserves all". The Sheremetev family was one of the wealthiest and most influential noble families of Russia. For example, the village of Sheremetevo, which in turn gave name to the Sheremetyevo International Airport, is named after this family. The members of the family are famous! Count Boris Sheremetev (1652-1719) was a military leader and diplomat during the Great Northern War, his son Count Pyotr Borisovich Sheremetev (1713--1788) was a courtier and noted patron of Russian theater. Son of Pyotr, Count Nikolai Petrovich Sheremetev (1751-1809) was a big patron of Russian theater, his wife was Praskovia Kovalyova-Zhemchugova, she was initially a serf woman belonging to the Sheremetev family, who became an actress in the Sheremetev Serf Theatre and later married Nikolai Sheremetev. Count Pierre Sheremetev is a chairman of the Russian Musical Society in Paris, rector of the Sergei Rachmaninoff Russian Conservatory of Paris (Conservatoire russe de Paris Serge Rachmaninoff) and honorary chairman of the International Council of Russian Compatriots. He is also archeologist, historian and honorary member of the Academy of Sciences.

By the way, the village of Sheremetevo, which in turn gave name to the Sheremetyevo International Airport, is named after this family. 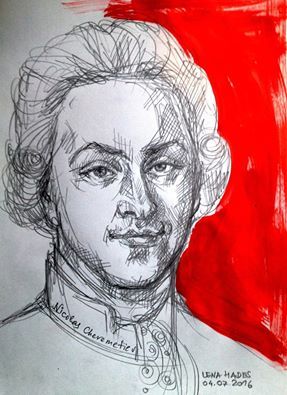 Kuskovo was first mentioned as the estate of Count Sheremetyev in the late 16th century, it remained the Sheremetyev family estate for more than 300 years until 1917.

Sommer Palace of the family Sheremetev.

This park now is a favourite place of recreation, many Muscovites like it. It is old and beautiful where there are thousands century-old oaks and limes. Now these centenary trees are cut down for the construction of a highway called the Northeast chord.

Therefore the 18th-century Kuskovo park and the Dormition church at Veshniaki (built in 1644) are under threat of demolition. The Minister of Culture Vladimir Medinsky considers this park and the museum complex located on its territory unimportant and insignificant, he allowed to cut down centenary trees. He called the Dormition church at Veshniaki a "building of no importance" and said that the church was built in 1917! 137 thousands of Muscovites have signed the petition against demolition of the park Kuskovo, so the petition gets more than 100,000 signatures! But despite this petition the cutting down trees goes on...