During his first years as president, Vladimir Putin has repeatedly declared that the rebuilding of the Russian state is his goal and his very highest priority. 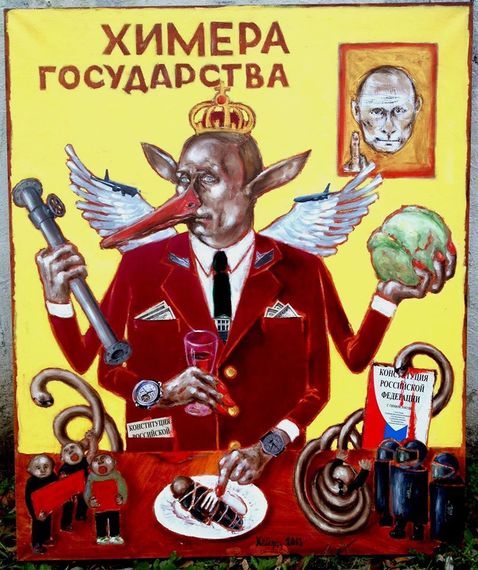 For Putin, the Russian state is unified, there are only national interests and there can be no interests that are more important than these. The official propaganda says that he is a strong leader who protects Russia from foreign threats, that he cares about people's needs etc etc. But as a matter of fact, the Russian economy under Putin is weak and ineffectual -- the quantity of population with the money income below the subsistence minimum is growing rapidly.

The Chimera of the State

The painting's size is 39" x 47", it depicts a monster with the head of a man, with wings and the beak and of a crane, three snake-headed tails and four hands. The Chimera -Tsar wears a crown, Chimera's hands hold a gas pipe and a head of cabbage. The oil painting was created by me, Lena Hades, in Juny 2013. On Sunday night, July 14, 2013, my studio was robbed by three Russian artists with pro-Putin political views, they organized a real pogrom destroying some art works. 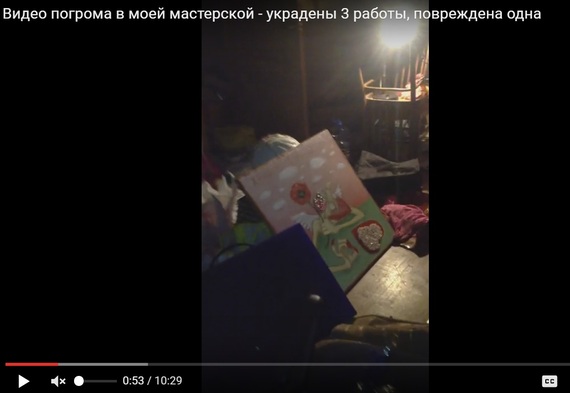 Previously, one of them had written a complaint to the Chief of Moscow Police, talking about my "antigovernmental" chimeras to justify their actions that followed. It appears that my Chimera Art would be a real non-conformist "forbidden art" in today's Russia.

The Chimera of the State does not know how to resolve problems bloodlessly, for blood and human flesh is its favorite food. If you take a closer look on the painting, you can see a white fork in the left hand and a glass of wine in the right. 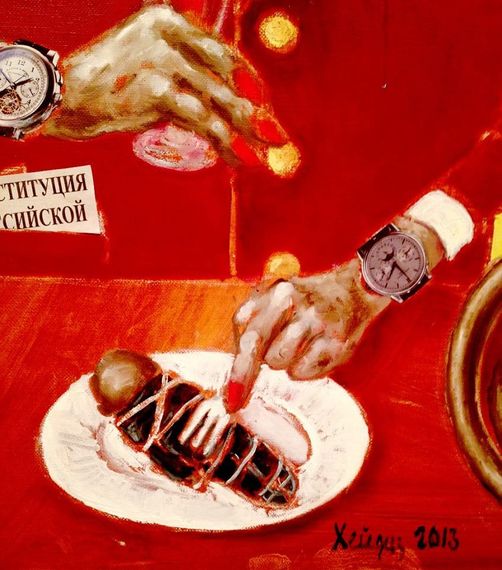 The Chimera of the State loves luxury watches, the monster wears two wathes at the same time - Lange & Sohne Tourbograph on its right hand and Patek Philippe on its left hand. Both cost more than 1 million U.S. dollars, but the Chimera knows perfectly that the number of people living in extreme poverty increases always faster!

If you look attentively on the painting, you may see that the Chimera shoved the Constitution of the Russian Federation into its pocket. Why did the monster do it? Let me clarify two points before I try to answer this question. First, according to the Russian Constitution (Article 31), "citizens of the Russian Federation shall have the right to assemble peacefully, without weapons, hold rallies, meetings and demonstrations, marches and pickets". 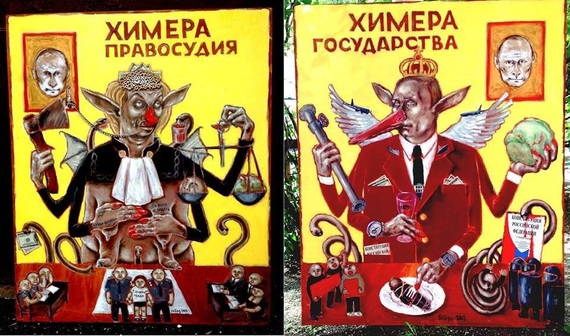 Second, in July 2014, the Russian Parliament adopted amendments to the Law on Public Assembly that penalize the participation in "unauthorized public gatherings, rallies, demonstrations, marches, or pickets" with heavy penalties and administrative detention up to one month. In addition, the same year, lawmakers added a new article 212.1 to the Criminal Code that penalizes unauthorized public assemblies with a five-year deprivation of liberty. So, I explained the reason why the Chimera put the Constitution in its pocket.

The Chimera's tails have the form of a huge poisonous snake. These snakes wear dark glasses, as all Secret Service agents do, at least stereotypically Secret Service agents are often portrayed wearing reflective sunglasses. On the lower right part of the painting you may see the snake-headed tail trying to strangle a man to death.