It's no secret that Russia's Prime Minister Vladimir Putin likes to uphold his machismo image with various publicity stunts and photo ops, but until now we hadn't realized just how funny the headlines about his masculinity are. From tagging dangerous animals, to stopping wildfires, to playing half-naked with guns on vacation, Putin may not be the most popular guy in the world but he sure is one of the most interesting. Even action-star Arnold Schwarzenegger doesn't get headlines like this, and he's also sitting in a powerful seat. Take a look at Putin's non-political achievements below, and vote for the most macho! 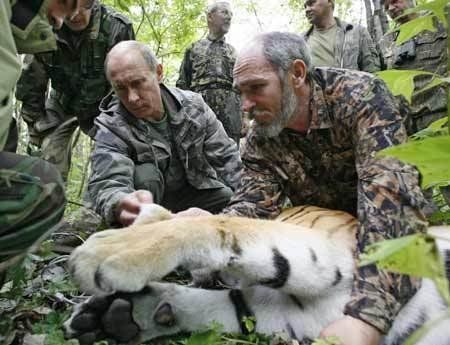 1 / 12
"Vladimir Putin Saves TV Crew: Shoots And Tags Charging Tiger!"
We'd like to have him around if we ever go on safari. (From <a href="http://www.zimbio.com/President+Vladimir+Putin/articles/247/Vladimir+Putin+Saves+TV+Crew+Shoots+Tags+Charging" target="_hplink">Zimbio</a>)