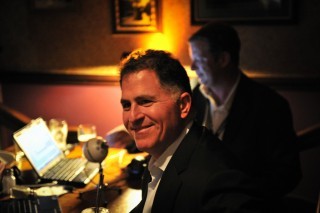 Amidst all the brouhaha over Dell's $67 billion bid for EMC, one unremarked fact caught my attention: that Dell will have to again begin reporting its financial results to the Securities and Exchange Commission (SEC). Michael Dell happily and eagerly rid himself of that onerous task almost two years ago.

The deal itself has spawned great controversy. On the one hand, the merger creates a monster provider of enterprise solutions that should be better able to compete with the likes of IBM. On the other, it will saddle the company with enormous debt, on the order of $60 billion.

But this is a different Dell than the business that went private in 2013. One of the most remarkable things I've observed is how energized both the man and company have become. Without the distraction of quarterly reporting, management has had much wider scope to underwrite businesses, place longer-term bets, and focus on what generates revenue growth: making customers happy. From top to bottom, everyone I've talked to seems full of zest, motivation, and focus. It's probably largely because Michael Dell at the top has transmitted his own enthusiasm to employees. It's quite remarkable in contrast to the Dilbert-like cultures prevalent in so many large organizations.

And Michael, the man running this private company, has repeatedly chortled about the cherished perk of being able to do pretty much what he wants, far from the glare of Wall Street. An anecdote I've heard several times over the past months features a senior employee asking him whether a certain project could be funded. Then Dell does a kind of Spalding Gray routine with himself in which he turns his head one way and asks his "board of directors" whether he can green-light the venture, then turns his head the other and responds, "Sure." At which point he smiles at the employee and says, "Do it!"

This ability to make lightning decisions and his generally greater willingness to take risks are surely part of why Michael decided to go after EMC in the first place. When he made the rounds shopping the company during his own go-private transaction, he deepened existing relationships and forged new ones in the private equity/hedge fund/ banking community. No doubt several people must have said something on the order of, "Once this is done, if you see any other promising projects along the way, you give us a call, y'hear?" And money of course is still relatively cheap. All those hot dollars are hungry for a decent return, in a market where some T-bills have negative interest rates.

But in order to get that money, Dell had to agree to a new reporting arrangement because of the VMware tracking stock. Now, it's true, the company was required to report some figures under the existing rules of the bond covenants made during the management buyout. But after the merger, Dell will own the 80% share of VMware that EMC currently possesses. So the holders of the public 20% of VMware have a right to know what's going on in the entity that issued the tracking stock-which is Dell. So, Dell will be back reporting financial figures in a form much closer to that required when it was a public company. Informed sources at Dell tell me that the company will begin reporting what this person calls "overall financials."

Competitors like Cisco, Hewlett-Packard, IBM, Lenovo, and Oracle will surely be interested in obtaining those figures. What they find may or may not give them much comfort, since Dell seems to be succeeding in at least some areas where in the past it has struggled.

But for Wall Street, this inside baseball will mostly be a big yawn, because traders can't trade the stock. The company is still private. There's no Dell equity on the market, and the company doesn't have to hold quarterly conference calls with ill-tempered financial analysts. The bonds are traded, but big whup. No one will turn out for that boring show, unless Dell fails to make a payment.

I once asked Dell, the man, whether he was a poker player. I was amazed by the brilliance of his opaque grin during a presentation I had just witnessed and felt he had the face of a gambler: enigmatic, unreadable, and full of carefully set contrasting signals. Eyes of steel and a cement smile. And he quickly responded, "No. I'm too much of a mathematician."

He gambles, but on a scale orders of magnitude greater than your average mortal. As a mathematician, he has surely looked at high, low, and middling scenarios for what will come after this EMC deal-projected revenue growth, gross and operating margins, and free cash flow-and concluded that he can cover his payments.

Anyone will be able to please themselves by going to the SEC to peruse the numbers. But Dell has managed to retain almost all of his operating scope and freedom of action, even as he leverages up the company with his name on the door.