In a new study published in the peer-reviewed journal PLOS ONE, researchers from the University of Miami and Duke University argue that a common type of speech known as “vocal fry” can hurt a job candidate’s prospects, especially a woman's.

What is vocal fry? It's a low-pitched, creaky-sounding speech inflection. Think of early Britney Spears or the Kardashians and you'll start to get the idea. Vocal fry is produced by a slow, irregular fluttering of the vocal chords, resulting in a staccato, creaky or popping sound in speech.

Here's an audio sample of vocal fry from the study (yes, guys fry too):

Still not getting it? Here's Kim Kardashian vocally frying all over the place:

Vocal frying has become a bona fide speech fad. A 2011 study found two-thirds of female college students in a small sample used it, possibly in order to fit into a social group. In that study, fry was perceived positively among undergraduate students.

But while vocal fry may not matter in college, it could be tanking your job prospects. In the new, much larger study, researchers asked seven male and seven female participants between the ages of 19 and 30 to say the phrase, “Thank you for considering me for this opportunity,” in a normal tone, then again with vocal fry.

Then, 800 men and women of all ages listened to the samples and noted, through an online survey, which speaker they found to be more educated, trustworthy, competent, attractive and appealing as a prospective hire.

For each quality, the listeners preferred the normal voice to the fry voice in both male and female speakers. Women with vocal fry also received lower scores overall than men with vocal fry, and women were hardest on other women who used it. 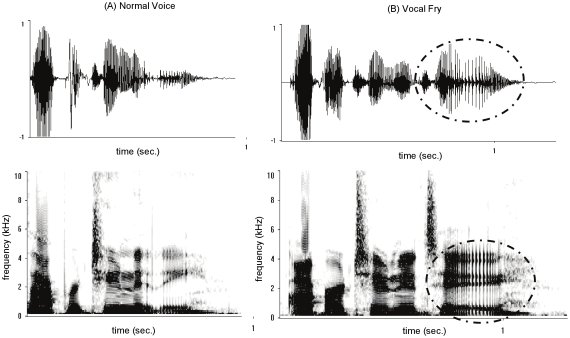 Vocal frying should not be confused with “uptalk,” which adds an upward inflection to the end of sentences -- like a question mark. Uptalk was most notably characterized by the Valley Girl talk of the "Clueless" generation. For years, it was perceived to be a sign of shallowness or even intellectual inferiority, but more recent research suggests that smart, successful women (and men!) do it too.

“Human beings find typical-sounding voices -- voices that are around the mean or norm -- more appealing,” Casey A. Klofstad, an associate professor of political science at the University of Miami and one of the paper's co-authors, told The Huffington Post. "While someone with a distinctive or unusual voice might be more memorable, we find an average voice to be more appealing.”

Women in particular can be negatively judged for vocal fry because it involves a lowering of the voice, which contrasts with their naturally higher voices. “If you exaggerate your voice in a sexually atypical way, that’s not going to be perceived as attractive," Klofstad said. "It’s seen as abnormal or unusual.”

Klofstad and his fellow researchers were surprised by these results. Previous studies have suggested that deeper-voiced women are seen as better leaders, and vocal fry has been shown to prevail among successful women working in male-dominated industries. (Former New York Times executive editor Jill Abramson has been pointed to as a fryer of note.)

It's no secret that women are often judged more harshly in the workplace than men, and this is hardly the first time they have caught flack for their voices. New York magazine points out that Abramson’s voice has been compared to a “nasal car honk,” while Hillary Clinton’s voice has been called “shrill” and “nagging” by some of her detractors.

Klofstad added that the study has implications not just for prospective hires but for employers, too. While men and women should take care not to fry during an interview, employers should be aware of their unconscious biases.

“It’s a two-way street,” said Klofstad. “This can be seen as a cautionary tale to prospective employers: Think about the ways you might be implicitly biased. Don’t let that bias override your better judgment in potential hiring.”