Animal lovers are seeing something a little bigger than a mere come-on for telecommunications services in this Vodafone NZ commercial.

It's an uplifting tale of a mail carrier discovering a lost pig, searching high and low for her owner and -- phew! -- ultimately saving Piggy Sue from an ugly end.

Animals Australia for example -- which regularly advocates against pig slaughter -- praised what some are seeing as an anti-meat message:

"When most corporations put a ‘pig' in their TV ad -- it’s to convince you to eat animals -- or more specifically, their particular brand of artery-clogging bacon-laden fast food. Vodafone New Zealand did the complete opposite," the group wrote on Facebook.

Spokesperson Fleur McFarlane was a bit coy when asked if Vodafone is indeed trying to reduce bacon consumption while also expanding its customer base.

"This ad is all about how much better life is when you’re connected to your mates –- and the fact that friendships often form in unexpected places," she said by email, adding that the intention of the ad is to show elements of New Zealand culture for folks "to identify with: care for our friends, whether human or animal, and our community spirit."

We'll take it. Especially since, best of all, Piggy Sue got a happy ending in real life, too, we're told.

She and her understudy under-piggy, named Chatty, have settled in "with loving families" on New Zealand farms where they "are having a great time," McFarlane said. "Both pigs are cherished pets, with carers who’ve made them part of the family."

Do you know an adventurous pig? Have another animal story to share? Get in touch at arin.greenwood@huffingtonpost.com! 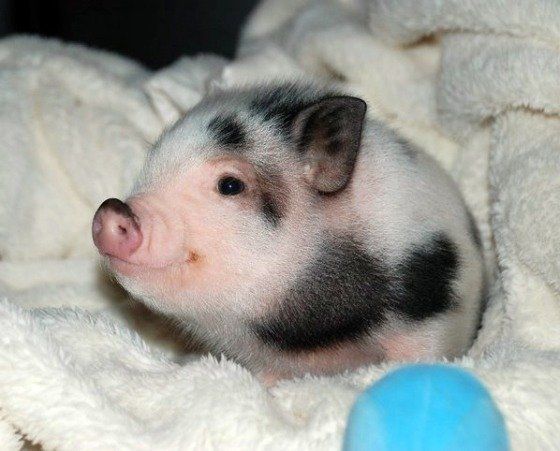 1 / 17
Little pig, you expect an Etsy store to be your only source of income in such an oversaturated marketplace???
<a href="http://imgur.com/r/aww/BguzG" target="_blank">Imgur</a>