Gaze upon the glistening surface of a Haitian Vodou flag and you may start to feel a bit dizzy. That's exactly the point. The wildly hypnotic textiles were designed to facilitate religious experiences. "They shimmer, glisten and become the meditative focal point of the Vodou ritual before the possession takes place," Everhart Museum curator Nezka Pfeifer explained to The Huffington Post. "They are made with religious power."

An exhibition titled "Sacred Symbols in Sequins: Vintage Haitian Vodou Flags" recently opened at the Scranton, Pennsylvania museum, bringing together a collection of wildly colorful Haitian flags, most of which date back 50 or 60 years. The ritual flags embody the creative fervor and cultural synthesis that defines Vodou practice -- just as the rituals themselves combine European, American and African histories, so too do the flags jumble symbols and icons until all bleed together into a single, sparkling plane. 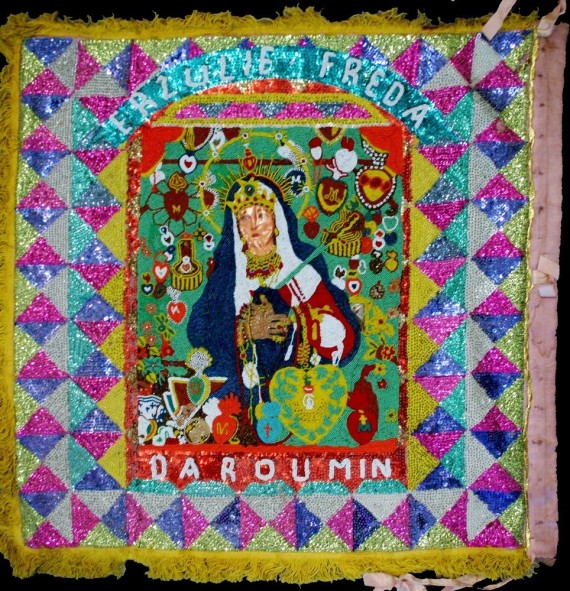 "The flags are very much a function of the time they were created in," Pfeifer explained. "There are no vintage Vodou flags that predate 1930, because the Caribbean climates of Haiti are so damaging to textiles, none survived. Originally, the older flags used metal sequins, but they were used sparingly because they were really too heavy for the flags. In the 1940s plastic sequins started getting imported into Haiti. Because of the lightness and the cheapness, the Vodou flag makers were able to cover every inch of the flags in sequins and beads."

The history of the Vodou flag was additionally complicated once their value as a purely aesthetic object was realized in the West. "As soon as people start coming in and realizing these are artistic objects, they became commodified and made for the purpose of art. They became art objects in the form of Vodou flags, but primarily as objects that could then be collected and displayed. They look different now." The exhibition does feature one contemporary flag, a piece reflecting the effects of the earthquake in Haiti. 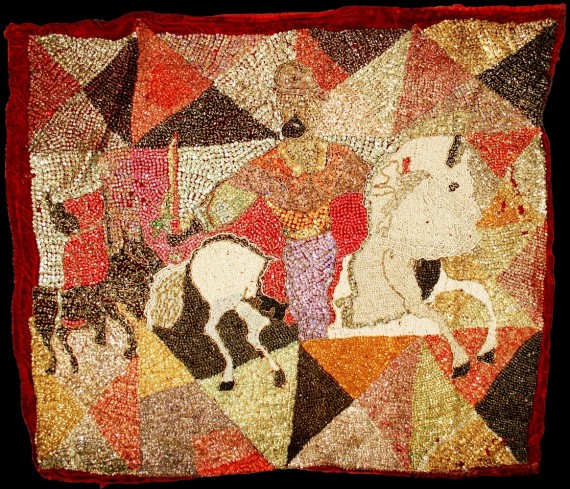 The exhibition will run throughout the Fête Ghede, the Haitian "Festival of the Dead" that falls on November 2. The Ghede is a family of Vodou spirits that embody death and fertility. The Everhart Museum arrived upon the festival, and in turn Vodou culture, after a previous exhibition revolving around Mexico's Día de Muertos.

"About five years ago we did an exhibit on Day of the Dead because we were dealing with some bigotry against Latin immigrants to the region," said Pfeifer. "We actually included a section of photos from Les Stone who had documented the equivalent of the festival that takes place in Haiti, where the Lua, or Vodou spirits, manage the dead." 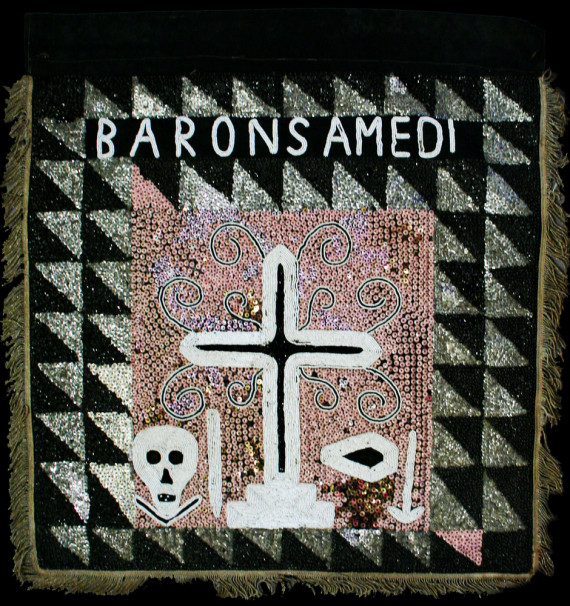 "After that we kept an eye on cultural shows. We're an object based institution -- half of which are science, half of which are fine art. So we have this massive show with all the Vodou flags, spirit bottles, libation bottles. We've also included more of Les Stone's photography, images of the pilgrimages of Vodou. They're these unique experiences when hundreds or thousands of people from all over the world come to these Vodou events in these sacred spots in Haiti. They're these lush, really powerful images."

The dazzling textiles on view, and all the historic Vodou relics displayed along with them, conjure a very different portrait of Vodou than the one often portrayed by Western folklore. "Some of the first things that come to mind when we talk about Vodou are Vodou dolls and zombies. This show is stepping around that concept and looking at Vodou as a powerful, communal part of contemporary Haiti. It's not just a thing of the past."

See the vintage flags glimmer and wink in the images below and head to the Everhart Museum before December 29, 2014 to catch a glimpse in person.