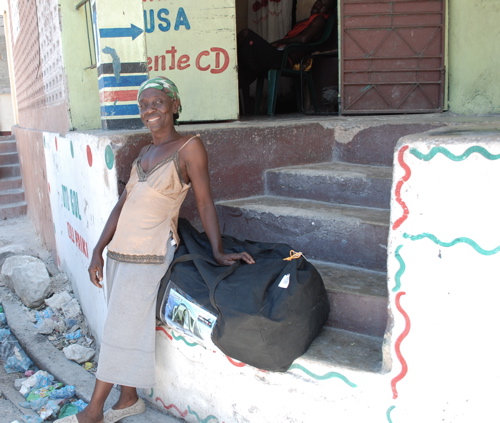 Writing about the shattered hopes and dreams of the Haitian people is like trying to describe the movements of a symphony to a hearing-impaired person. How does one separate the elements of the whole, the hundreds of conversations, pleas, and stories that assault the senses, while explaining to an indifferent world that they must open their eyes because the cries of the Haitian people are certainly falling on deaf ears? One can go back 200 years, or to make it easier, examine the practice of "foreign aid" from the early 1950s to the present. This source of income has destroyed the ability of Haitians to grow their own economy, and the waste of money is as toxic as the human waste that is polluting the displaced persons (IDP) camps.

There are over two million homeless people in Haiti today, despite the infusion of over one billion dollars in US aid in FY 2010.

Displaced is really a euphemism when one considers that "displaced" means living in crowded plastic tent cities with little food, water, medical care or sanitation. Rape is on the rise. A combination of corruption, no accountability from local officials, and the disaster capitalism of foreign aid have helped to produce seas of tattered "cities" that are worse than any slum one can encounter.

As a rape counselor told us, "We were living in small vulnerable homes before the earthquake, but our homes had windows and doors. How can we live in plastic?"

Young women are assaulted and raped on the way to the latrines at night, and so now women are told to use plastic bags to relieve themselves in the relative safety of their tents.

We met well-meaning individuals who were constructing housing from shipping containers and recycled billboard plastics. Ask yourself if you would want to live in a shipping container. Americans cannot tolerate camping for a week without sewer, water and power hookups at national campgrounds.

The fact that so many people are living under shredded plastic and not rioting in the streets is testimony to the resilience and patience of the Haitian people. Hope seems to be the only thing keeping them from anguish and the violence that ultimately flows from despair, but the ripples of anger are beginning to move outward from the plastic cities. 1,000 people protested against the government of President Rene Preval on May 10, hours before this video was taken.

Small demonstrations have begun, but overall, even the most destitute cling to hope--and hope can work miracles for the human spirit.

Our last report told the story of one woman, Venise, whom we met in Champ de Mars. We thought that the best we could do would be to bring her some food to nourish a shattered spirit. A sturdy tent seemed far beyond our grasp, but that was before we met Andy Gleadle of the International Medical Corps (IMC) for an interview that tuned into a conversation in the lobby of the Hotel Plaza, a few blocks from the city of leaking plastic that is Champ de Mars. 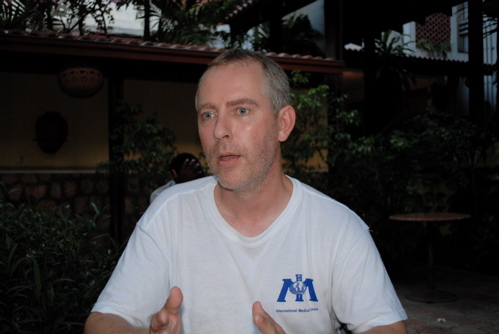 Gleadle and the writer approached each other like two wary teenagers on a forced blind date. Neither was sure they could tolerate the other until Gleadle's concerns about being ambushed by a journalist were soothed, along with the writer's fears of not getting answers to a few questions.

Humor broke the ice. And humor is in short supply in Haiti.

Gleadle is the coordinator for the IMC, an organization partnering with the director of Hopital De L' Universite D' Etat D' Haiti (HUEH), which is the equivalent of a County Hospital in United States. IMC organizes the triage of patients, handles acute patient care, and created an emergency surgical facility that established a telecommunications system throughout the hospital after the January 12 earthquake.

Certainly, IMC is doing a yeoman's job in Haiti. But, the story of their work at the beleaguered Hopital De L' Universite D' Etat D' Haiti is another movement in the complicated symphony that is Haiti, and we will explore the hospital in another post.

Serendipity stepped in to play a huge role in what happened next. Dr. Sonia Winslett, a volunteer emergency physician with IMC, also happens to know this writer through several connections, one of which was hurricane Katrina. After reading the story of Ms. Venise in the Huffington Post, Dr. Winslett wrote to mention she had left a tent behind during her stint in Haiti with IMC. Perhaps we could locate the tent and give it to Ms. Venise?

We dropped an email to Gleadle and his reply was compassionate, thoughtful and generous.

We have some 6 x 4 metre tents left that are heading to Petit Goave camps today and I can pull one of those off the truck and send it down to the Hotel Plaza this afternoon. We also have another 300 - (9 person) tents coming through customs shortly and more to follow. We are not an agency that specializes (sic) in shelter but are trying to do what we can with donations we receive. Please give my regards to Ms. Venice and may God bless her and her family.

Gleadle had no way of knowing that he had just given Ms. Venise the courage to return a place of sorrow, plant her flag, reclaim a part of her life, and unite a fractured family. Neither did we. The writer's colleague from OEN, Mac McKinney, and our translator had planned to drop the European high tech High Peak Lindos 6 Person Tunnel tent off with Ms. Venise and send someone to help her erect it. As we pulled up to the curb at Champ de Mars, a changed Ms. Venise, looking sassy in a silk blouse and no longer like a very old woman, was sitting and waiting for us. She had hoped that we would return and waited. For such is the strength of hope. When Andre opened the hatch and showed her the tent, she was transformed yet again and told us through Andre that now she could leave her leaking tent and go home. But where was home? She would show us.

So, Venise summoned her surviving daughter, Marie Venise, who was breastfeeding her infant granddaughter, and we drove off to Bel Air, once the forbidden "red zone" of violence after the quake, but now just a neighborhood in Port-au-Prince that once sheltered 10,000 families. No matter what color the zone, this is where Venise had a four-story (three by US description) home that was pancaked by the quake. From the top of the hill, at the intersection near the remains of the house, one can see the crumbled Presidential Palace. Look in another direction and the Caribbean shimmers blue.

Venise's relative by marriage, Fontaine Waline, joined us at the site where the extended family once lived. 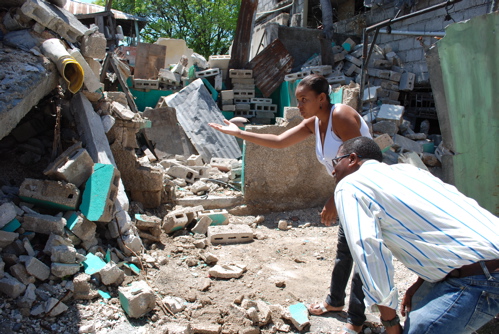 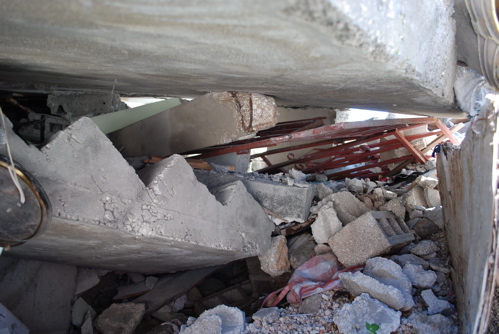 Fontaine was pulled from the rubble hours after the quake, but her niece was not so fortunate and was garroted by a red gate on the stairway. The niece's baby survived on the doomed woman's breast. Venise's daughters Cherlu (28) and Sophia (24) also perished in the rubble that once was home to a close family. Bit by bit, the family has been clearing rubble by hand in hopes of rebuilding. Gleadle's tent changed despair into renewed energy. Surprisingly, each family member described the aftermath dispassionately. It is time to move on, but the family remains in a precarious position. The main structure of the house looks like it could topple at any moment, but at least it is leaning away from the small patch where the new tent will rest. 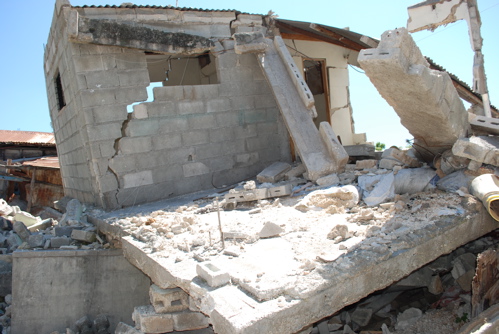 How anyone can be happy about this situation is beyond what the rational mind can grasp, but Haitians have been enduring adversity for over two centuries. It remains a travesty, but Venise's enthusiasm at this tiny window of opportunity is infectious, and made us happy until we looked at her situation with critical dispassion and worried for her safety. Still, it is not our place to make the judgment call for Ms. Venise. Her life has been transformed by a sturdy tent that will not leak, courtesy of a serendipitous connection of strangers and friends in the midst of chaos.

But, Ms. Venise and all of Haiti deserve more than a band-aid for their misery.

As part of the "solution" to the crowded tent cities, some families are being relocated to a site in Corail Cesselesse, along Highway One, and a stone's throw from one of the forgotten camps, now named Camp Canaan, that we profiled in March. Oxfam, CARE and World Vision cooperated with the Haitian government to relocate some 5,000 individuals residing at the Golf Club in Petionville to "Camp Corail," and it is a Potemkin Village of illusion. But the NGO's also criticized the Haitian government for lack of coordination through Marcel Stoessel, head of Oxfam's operations in Haiti.

We realize this is an emergency relocation due to impending rains and we are moving with utmost urgency to prepare this site," said. But future moves cannot be done in this last-minute fashion. 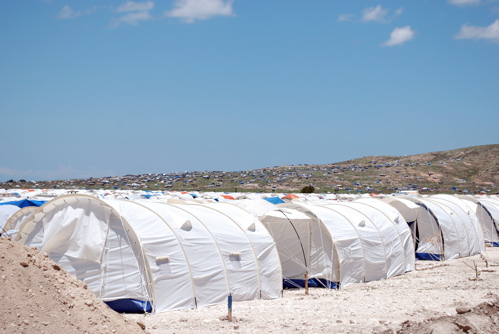 Camp Canaan is visible in the background

For those who don't know the story, Grigori Aleksandrovich Potemkin, commander-in-chief of the Russian army in the late eighteenth century, was also the lover of Catherine the Great. Potemkin had elaborate fake villages constructed for her tours of the Ukraine and the Crimea.

America's sudden love affair with Haiti has helped to create this city of illusion within sight of the shredded blue tarps of Camp Canaan. It is only the color of the tents and the strength of the plastic and nylon that delineates them--and all anyone wants is to "go home."

We were lucky to get the interviews in Camp Corail. It is normally guarded by the UN, but no one stopped us when we went in and no UN trucks or troops were visible. After a representative from Save the Children told us we could not be there or take photos (we did anyway) we left and encountered an armored UN vehicle entering the camp. A student from Boston University told us he was kicked out by the UN, but returned at night to distribute small LED flashlights. What he saw when the rains came will be part of our next post where we will also follow the trail of the tarps and see how life is no different in these camps. Camp Corail is the illusion and Camp Canaan is the sad reality.