"What we are trying to do may be just a drop in the ocean. But the ocean would be less because of that missing drop." - Greg Mortenson

Last May, I proposed the idea of "Voices Of Pakistan" to Paul Berry, the CTO of The Huffington Post Media Group, who greeted the idea with fantastic enthusiasm and encouragement. He had also suggested that I read a book entitled Three Cups Of Tea by Greg Mortenson as an inspirational primer.

Following my completion of reading the book, I became frustrated from hearing defaming allegations against Greg Mortenson and his work. I found it unfortunate that people would so vehemently attempt to derail such a brilliant project as his, while ignoring all of the noble progress which has been documented and made by his efforts. As Nicholas Kristof states, "If all the allegations turn out to be true, Greg has still built more schools and transformed more children's lives than you or I ever will."

Additionally, I found myself contemplating and deliberating about the educational system of Pakistan. I found myself exploring questions such as: How responsible is the lack of education and/or the overwhelming presence of propaganda-based education for the rise of extremism, and would things be different if a larger percentage of Pakistani children were taught valuable skills in critical thinking?

I communicate regularly over e-mail with my father, who shares a similar passion for reading as I do. I asked him to read Three Cups Of Tea, so that we could discuss it together afterwards. His reply back to me added to the array of questions already in my head, "How to motivate Zeeshan?" Here is my father's e-mail:

"Sobia, I wanted to let you know about an interesting young man. Zeeshan is the eldest son of a person who works as a security guard. His stepmother works as a maid in multiple houses. His two younger brothers, age six and nine, also work along with their stepmother (they clean window panes, etc.) in the house where they have a single room servants' quarter with free utilities.

Though Zeeshan is by age group in the ninth grade, his education level is less than that of a fourth grader. He came to me for help a fortnight ago. I agreed on the condition that he work hard. I have started teaching him fifth grade courses. It is sometimes frustrating to see him laboring with simple figures at the age of sixteen, but since he is prepared to work hard, we are progressing well. I have promised him that he will be able to take his ninth grade board exam next April, if he doesn't give up. He comes to me in the evening and is determined not to let exploitation of his family by the rich continue. If he succeeds, his two much younger brothers are bound to follow in his footsteps. Three Cups of Tea could not have come at a more appropriate time. I can surely use the inspiration the book is very likely to infuse."

My father, who is a retired professor and has managed to raise me and my brothers to be critical thinkers, added:

"Please do some thinking for Zeeshan and let me know how I can keep him motivated through difficult months ahead."

Its not uncommon for young boys and girls, from low-income families in Pakistan, to have immense pressure to help provide for their families' immediate concerns rather than focusing on their future. Zeeshan's situation is not atypical, but him approaching my father definitely is.

There are some striking statistics to be found regarding the status of Pakistani children, as well as their education and literacy. The last child labor survey conducted by the Pakistani government was in 1996, according to which the 3.3 million children were employed as child laborers. The number in 2011 is estimated to be 21 million. The adult literacy rate in Pakistan is 54.2%, one of the lowest in the world, and according to the "Education Emergency" site, "30% of Pakistanis live in extreme educational poverty." According to reports, the Pakistani government spends less than 2.7% of its GDP on education, ranking 143rd out of 182 countries.

I suggested to my father that he should motivate Zeeshan by helping him understand how his education will improve his family's prosperity, as well as contribute towards his personal growth. When I asked about Zeeshan's progress after a month, my father responded:

"Zeeshan is hung between 'to be' or 'not to be'. He is sixteen-years-old and at the brink of succumbing to a life of ignorance. His entire family has come from a remote area to Rawalpindi to make a living by working in middle to upper class homes.

The priority of the father is to have the family and the eldest son in particular earn enough income to take back to his village where the same amount of money will be worth more. Zeeshan and his father work in different houses in the vicinity and fall back in the evening to join the family in 'bonded' labor. The entire family is fully satisfied because of achievable goal in sight. Their standard of life is much 'better' than what they had in the village, except that they are not left with any will of their own. Their hard task masters make sure that they don't put on any extra fat.

Despite heavy demands on his role as the eldest son, Zeeshan has not been able to abandon his dream of getting education. In addition to washing cars of his employer, he has to run different errands, including taking his two younger brothers to school and back. He is intelligent, hard working and endowed with plenty of sense of wonder. The thrill of learning new things is evident from his face, though he is very shy in nature. He is making progress but not enough to take his ninth grade board exam in coming April. The obligations of his family and work take a heavy toll on the meagre time available to him to improve his education.

Every now and then his father informs me that Zeeshan is unable to come due to one reason or the other. I fear the stated reasons are mostly different from the actual ones. Yesterday I was informed by his father that he has dispatched Zeeshan to attend the funeral of his uncle in a village located five hundred miles from Rawalpindi. When I asked Zeeshan's father as to why he didn't go himself; he told me that he had been denied leave of absence by his employer.

I dread that Zeeshan will not be able overcome heavy odds which his path to salvation is littered with. His motivation is fast eroding and his two younger brothers are also at great risk of getting lost."

"Most children working in Karachi earn between Rs2,000 and Rs3,000 a month, a fifth of whom children work more than 12 hours. Since food and boarding is often included in the terms of employment, this money goes directly to the consenting parents. So a poor family is earning around Rs2,000 per child. The more children they have, the more this figure is multiplied by. And then we wonder why our poor persist with countless children."

I am worried about Zeeshan. How will he contribute to a brighter future for his family and Pakistan, let alone develop critical thinking if he has not even finished primary school? Lack of critical thinking and reasoning skills leaves people believing in propaganda without gathering all the facts and susceptible to having a negative outlook on their own society and other societies. It also leads to the idea that following the popular viewpoint (good or bad) is accepted as a way to fit into society, rather than productive changes which may occur from better teaching, training, and following one's own thoughts and ideas. This issue is not unique to Pakistan and is shared in other countries of the region. However, in Pakistan its worth exploring to make connections between education's impact upon increased tendencies to deviate towards extremist viewpoints.

I implore the readers to do some thinking for Zeeshan and for other Pakistani children who are being forced to put education on a back burner. How do we break this vicious cycle? How can we motivate Zeeshan's father to let him get an education? How can the government better enforce the primary education law? Do we need more volunteers like Master Ayub who are running open air schools, or volunteers like my father who work with children one on one? Can humanitarians like Greg Mortenson save Pakistan from plunging into complete darkness by educating girls of Pakistan? Or are campaigns like "I am paid to learn" by Shehzad Roy the answer?

Most importantly, what can we, Americans, do to help Pakistani children? As Greg Mortenson cautions, "If we truly want a legacy of peace for our children, we need to understand that this is a war that will ultimately be won with books, not with bombs."

Voices Of Pakistan: Drifting In And Out Of Education 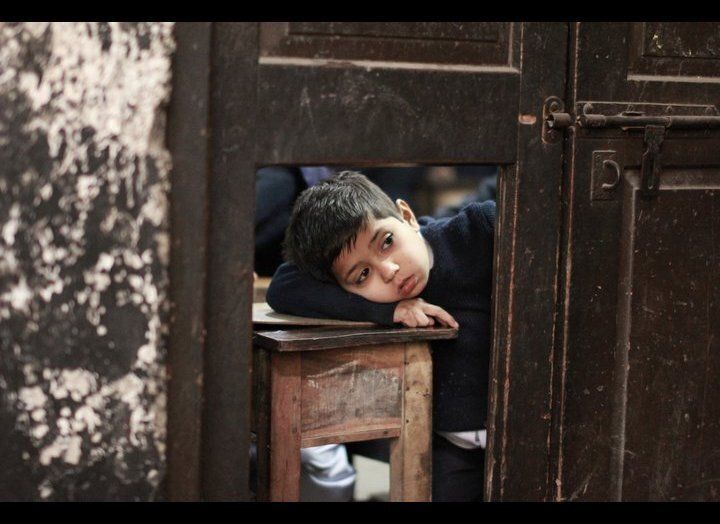 1 / 9
A young boy in a classroom
Fayyaz Ahmed for www.educationemergency.com.pk