I am a caregiver for my partner who has become housebound and bedridden due to an incurable "invisible" disease. I too live with a serious illness, barely getting through each day, mostly housebound myself. Franky and I met, and a spell was cast; we fell madly deeply infatuated with each other, as young love often does to people. We traveled, went to social events and started dreaming of a life together. Within a couple of months, I was diagnosed with an aggressive strain of HIV. Our fast-run fairytale seemed to be cursed and destined for failure. But we persevered.

My family's involvement in my life was scarce due to their struggles with me being a gay man. Luckily, Franky took the reins in helping me to fight for my life. Though we had just met, Franky cared for my body, fed me, and cleaned the sheets every day, as my night sweats and regular vomiting occurred. Every single day, Franky never gave up on me. Slowly, with the grace of God, I got better! Franky was free to start his studies in a doctoral program for education, as his lifelong passion was to become a great leader and help those who cannot easily help themselves. So now it was my turn to support him. We traveled to Oxford for Franky to finish his studies, and shortly after we returned to our home in San Francisco, Franky had a routine ear surgery. But then something went very very wrong.

You see, Franky has lived the majority of his life with a little-understood chronic illness, which relapses and fluctuates without warning. This illness is ME/CFS (myalgic encephalomyelitis/chronic fatigue syndrome) and it is often referred to as the great "invisible disease" of our time. Franky once had to drop out of high school due to the symptoms that hit him as a teenager. He picked himself up, and also without any help from family, he made it through his terrifying wanes of illness, and somehow put himself through several different colleges. If you've ever wanted to meet one of those incredibly rare people who can show strength in the face of unimaginable crisis, then Franky is your man.

After his ear surgery, Franky's illness kicked in with the force of a dragon's venom. He had violent thrashing vertigo and seizures, along with bone-crushing pain that spread up and down his every fiber. He could not move without assistance. I had to spoon-feed him, and bathe him. As a person living with HIV, watching the daily suffering of my partner who has chronic fatigue syndrome, I can tell you without hesitation, chronic fatigue syndrome is much worse than HIV. It's unfathomable that his disease is even named something as belittling and dismissive as chronic fatigue syndrome. Oh yes, a war had begun. Now, it was my turn to care for him as he once did for me! We pulled together, and I nursed him with patience, love and an everlasting belief that if we did not give up, then we would win.

We made a pact to tell each other "I love you" everyday, and to laugh everyday. Believe me, even if you have to force out fake imitation laughter, it is really funny! Real laughter can be found, always. As a survival technique, Franky went to a daily monk-like meditation that lasted for years. He told me stories of ethereal beings, offering lessons of hope and strength for him to share. As Franky's health returned enough for him to sit up, I had an idea.

I brought him art supplies, and told him to create his visions. Without any training, Franky began sculpting and painting such detailed life-like faces, figures and impressions, all from bed or even on the floor. It was unlike anything I had ever seen before. I swear, I was witnessing pure magic coming to life. Suddenly, our home became a factory of creation. And so began ... Fae Factory -- a place where magic is made.

After we became disabled, we lost that all-important sense of purpose. Through art and advocacy, we found our voices again -- and we are helping others to do the same. We founded FaeFactory.com, where we share Franky's visionary art and lessons of hope. We also established InvisibleDiseases.com, where we give awards, art supplies and love to those with ME/CFS, lyme disease, fibromyalgia and dysautonomias such as POTS (postural orthostatic tachycardia syndrome).

We created a way to sustain ourselves, all while helping people along the way. It has been the fight of our lives, and we never did get the happy ending that we worked so hard for. But we got something better. We found out what we are made of, and we found our destiny.

This is not a story of a fairytale. This is a true story. Our story. Today Franky is 37 and I'm 33. We discovered that a curse can be broken, a spell can be altered, and in the end, true love always wins. 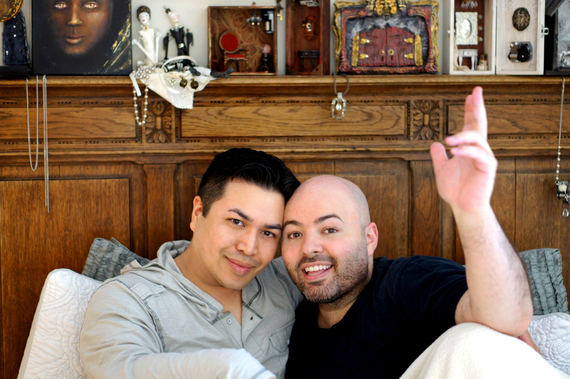 Founder of FaeFactory.com and InvisibleDiseases.com; where he serves as Director and advocate for deserving unsung heroes