Sure, lava is amazing. But for geologists, the real intrigue lies just below the volcanic surface.

It's why researchers at NASA’s Jet Propulsion Laboratory (JPL) are developing small machines, called VolcanoBots, to climb the walls deep inside volcanic vents.

“We have a good picture of what happens once we see an eruption start at the surface, but all our problems are subsurface,” Bruce Houghton, the Hawaiian state volcanologist at the University of Hawaii, told The Huffington Post. “We lack technology.”

In other words, geologists don't currently have an accurate model of a volcano’s plumbing system. Knowing that information, Houghton said, “would help us forecast the form and the shape of the next eruption.” 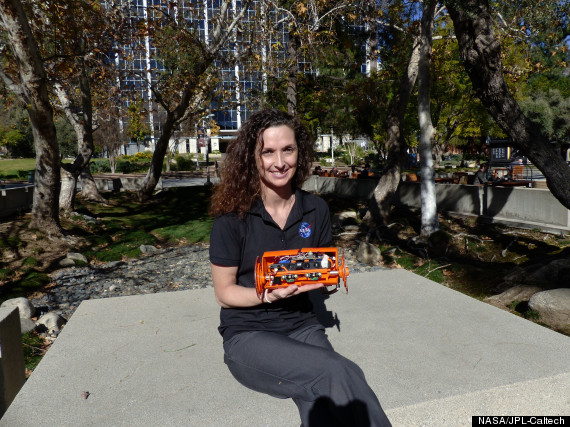 Carolyn Parcheta, the lead geologist on the project, told The Huffington Post that VolcanoBot has been in production for a year. It's controlled as "a kid would control an RC car," she said, with signals sent through her laptop. VolcanoBot is equipped with an onboard temperature sensor, a short-range distance sensor that helps it brake, an accelerometer, and wheels embedded with "microspines" to gain traction against rock.

The first generation of the VolcanoBot was tested at Kilauea volcano in Hawaii last year. Parcheta, a NASA postdoctoral fellow at JPL, paired up with one of the lab's robotics teams to steer the two-wheeled robot down an inactive vent.

Volcanic conduits typically get destroyed during eruptions, which means they can't normally be measured, but Parcheta found two preserved, inactive fissures in the active volcano for her expeditions. Through the VolcanoBot's 3D camera, Parcheta and her co-advisors, Karl Mitchell and Aaron Parness, hope to learn how magma travels to the volcano's surface during eruptions.

"In order to eventually understand how to predict eruptions and conduct hazard assessments, we need to understand how the magma is coming out of the ground," Parcheta said.

Using the 3D images, researchers are now making a map of the fissure -- the first of its kind.

"This is the first time we have been able to measure it directly, from the inside, to centimeter-scale accuracy," Parcheta said. 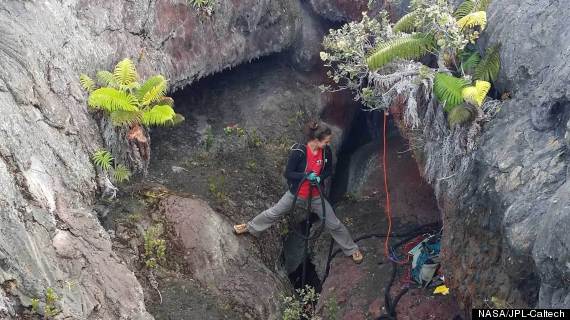 Parcheta sent VolcanoBot 1 down a fissure of the Kilauea volcano in May, 2014.

VolcanoBot 1, however, ran into some obstacles, chiefly that it didn't move as well as the team wanted, and it only made it down 82 feet before it reached the end of its tether.

Now, the second generation VolcanoBot, which is smaller, lighter and stronger than the first iteration, is ready to go deeper inside the volcano so that more data can be collected.

"Scientists and engineers working together on such a small team is pretty rare," Parness said, "but has generated lots of great ideas because our perspectives on the problems are so different."

In early March, the new and improved VolcanoBot 2 will descend Kilauea again. 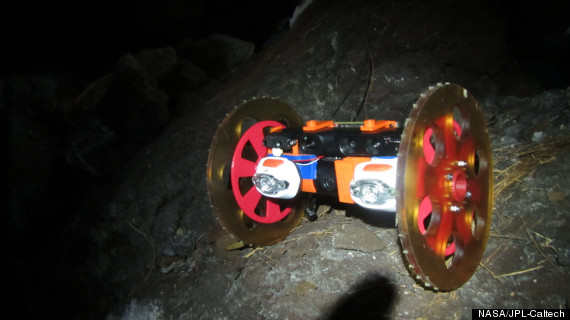 NASA is especially interested in the research since it can be applied to extraterrestrial volcanoes as well. On Mars, for example, magma is thought to have erupted most commonly from fissures, and scientists think the same thing could be said for previously active volcanoes on the moon, Mercury, Enceladus and Europa (the moons that orbit Saturn and Jupiter).

"In the last few years, NASA spacecraft have sent back incredible pictures of caves, fissures and what look like volcanic vents on Mars and the moon. We don't have the technology yet to explore them, but ... we're trying to bridge that gap using volcanoes here on Earth for practice. We're learning about how volcanoes erupt here on Earth, too, and that has a lot of benefits in its own right," Parness said.