Amy Mitchum loves the way her daughter’s kindergarten classmates’ eyes light up when she tells them she works with robots.

The 38-year-old Volkswagen factory worker is a graduate of the automaker’s experimental apprenticeship program, modeled on the vocational training used to educate workers in Germany. In 2012 she left an unfulfilling career in real estate office management and enrolled in the Chattanooga, Tennessee-based Volkswagen Academy's three-year course.

She completed her training in August and now spends her workday overseeing an assembly line of spindly robots coating glossy paint onto the tempered-steel shells of what will ultimately become Passat sedans.

“When I tell the little kids I work on robots, they think that’s the coolest thing in the world,” Mitchum told The Huffington Post. “I go in the classroom once a month to and spend the day, and I wear my Volkswagen shirt.”

Mitchum is among the first wave of U.S. workers to graduate from Volkswagen's five-year-old, learn-on-the-job program, which operates in partnership with Chattanooga State Community College. Hoping its experiment can serve as a new paradigm for American workers, the German automaker pays a wage throughout the education -- starting at $10 an hour and increasing $1 for each completed semester -- and offers jobs to graduates.

Of the 25 who have completed the program so far, all but two now work at the Chattanooga plant: One opted for a job elsewhere; the other has a position reserved for him when he finishes the classes he is taking outside Volkswagen’s program. 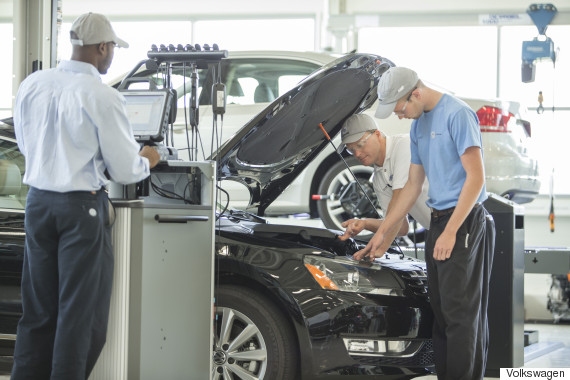 Apprentices spend a portion of their education in classrooms, and the rest getting hands-on training on the factory floor.

Apprenticeship programs in the United States dropped 40 percent from 2003 to 2013, in part because of their blue-collar image and fear among businesses that workers will leave company-sponsored programs after getting their education, according to the National Center for Policy Analysis.

But the skills learned during such programs are crucial, and the demand for adequately trained workers is real. The U.S. manufacturing sector couldn't fill 600,000 jobs in 2012 due to a lack of skilled workers, according to a study by consulting firm Deloitte LLP.

Volkswagen is now ramping up marketing for its apprenticeship program and proselytizing the benefits of this approach to learning. Company executives crisscross the U.S., calling on leaders to advocate for apprenticeships as a means of educating more American youths, whose unemployment rate stood last month at 12.2 percent, more than double the national average.

“Right now we’re in a situation where, on the one hand, we have these high levels of youth unemployment and on the other hand, we have employers saying we can’t hire the people we need to hire,” Sarah Ayres-Steinberg, a senior policy analyst at the nonprofit Center for American Progress. “Clearly there’s some friction in the labor market -- and apprenticeship eliminates that friction.”

In Germany -- a country known for worker-friendly practices -- apprenticeships are part of the school system. Between the ages of 12 and 14, students choose between two educational paths: One is a vocational apprenticeship, the other leads to university. Labor unions, chambers of commerce and industry groups help determine the learning criteria for apprentices, to make sure they leave school with the skills needed to enter the workforce.

Just this week, JPMorgan Chase CEO Jamie Dimon praised Germany’s apprenticeship programs for training students to get jobs out of school. Last December, the youth unemployment rate in that country was 7.2 percent, though standards for measuring unemployment rates vary from country to to country.

Volkswagen isn’t alone in trying to import Germany’s apprenticeship model. BMW and engineering giant Bosch, both German companies, have started similar programs at plants in South Carolina, where there is a state program encouraging apprenticeship.

But there are challenges to implementing U.S. versions of Germany's programs. Volkswagen has had a particularly tough time convincing parents that an apprenticeship is an adequate alternative to college.

A college degree generally translates to making more money. A recent study found that college grads can earn about $800,000 more than those with just high school degrees. But college isn't for everyone, and in a competitive job market, an apprenticeship may be a decent option.

“There is a negative attitude and a common behavior that everyone has to go to a college or a university instead of running to a vocational training or an apprenticeship,” Sebastian Patta, Volkswagen of Chattanooga’s vice president of human resources, told HuffPost in his thick German accent.

People, Patta said, have misconceptions about Volkswagen's factory floors. “They think it’s dirty, it’s dark, it’s loud, it’s crazy -- it’s a completely wrong picture," he said of the factory in Chattanooga. In reality, he added, the place is pristinely clean.

Apprenticeships could also make workers feel good about themselves. The sense of pride instilled in people paid to learn a trade boosts morale, says Robert Lerman, an American University economics professor who specializes in youth employment and family structure.

“These systems tend to convey a strong sense of occupational pride that too many of our middle-skilled positions don’t,” he told HuffPost. “They don’t have a strong sense that they’re part of a community of practice, and as a result, they don’t get sufficient respect or feel self-respect.”