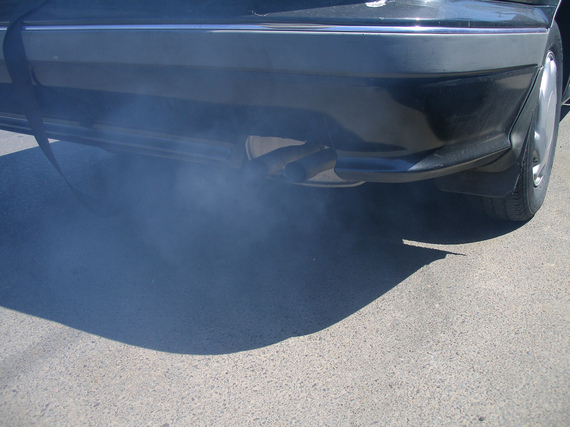 When the election votes were barely tallied, the Alliance of Automobile Manufacturers representing most automakers that sell passenger vehicles in the U.S. sent a letter to President-elect Trump explaining the many ways they wanted the new administration to weaken vehicle efficiency regulations. Here we go.

Transportation is now the largest source of U.S. carbon emissions, recently surpassing the electricity sector. The oil we guzzle in our cars, trucks, and buses is making our planet sick. Passenger vehicle fuel efficiency regulations have been one of the cold compresses we've needed. The latest science shows that we are hurdling so quickly toward a two degree Celsius increase, from which experts say increased severe weather events will become all too common- that it's less a matter of whether we pass this point, but how quickly.

That's one of the many reasons why automakers, labor unions, environmentalists, and policymakers have worked together over the last several years to pass new vehicle efficiency standards into law first under President George W. Bush and then strengthened under President Obama. There had been common agreement that it was indeed possible to slash vehicle air pollution, save consumers money at the pump, increase vehicle sales, jumpstart the market for electric vehicles (EVs) that rely on little to no oil, and meanwhile protect auto manufacturing jobs as well as corporate auto profits. Sure, there have been some disagreements over the details, but overall, everyone was on board.

Now the automakers may be going back on their commitments.

The Auto Alliance's letter asks the president-elect to weaken the vehicle efficiency standards under the misleading term of "harmonizing" the rules among the three government agencies that carry out the standards - the National Highway Safety Transportation Administration, Environmental Protection Agency, and California Air Resources Board. This would have the practical effect of increasing carbon emissions, as well as weakening the miles per gallon level that cars would otherwise achieve. The auto manufactures are ahead of the game in meeting the regulations, and we should continue to hold them to high standards.

Automakers also are asking the new Administration to review the Zero Emission Vehicle (ZEV) program followed by California and nine other states. The Alliance disingenuously said in its letter that California has supported the program with tax incentives and other programs, but other states haven't followed suit, leading to "dramatically" different ZEV purchase rates outside of California. In reality, many Northeast ZEV states have created consumer incentives, but the real reason for lower ZEV purchase rates in the northeast ZEV states is that automakers and dealers largely restrict EV inventory, advertising, and salesperson training to California, as an extensive multi-state recent EV shopper survey found.

All the automakers of gas guzzlers share the blame for this position and can't hide for long under the cloak of the Alliance, but let's start by calling out Volkswagen. First, Volkswagen duped millions of consumers with its "clean diesel" cars that actually pollute up to 35 times more than what is allowed by the EPA. Then it started to take some positive steps by announcing new investments in electric vehicle models - 30 new EV models by 2025.

But now Volkswagen seems to be going backward. The company supported the Auto Alliance in asking President-elect Trump's team to weaken the vehicle regulations that are among the most important efforts to curb dangerous air pollution. And at this month's Los Angeles auto show, Volkswagen chose not showcase its new focus on clean electric vehicles but instead featured its new inefficient SUV.

Volkswagen can't have it both ways. The company can either start to redeem itself by finally being on the side of cleaner cars and cleaner air - or it can continue its legacy of dirtier cars, polluted air, and an unsafe climate.

As President-elect, Trump is showing where his allegiance lies -- not with the health and safety of American families or our climate but with the fossil fuel industry. One of Trump's first picks for his transition team was for notorious climate-change-denying, oil industry shill Myron Ebell to lead efforts to likely dismantle the Environmental Protection Agency.

We will not take the weakening of our vehicle and air pollution standards lying down - not from the Trump administration nor from corporate automakers. It will be up to environmental and public health advocates, policymakers, and all people who value clean air to breathe and a safe earth to inhabit to fight back and defend policies that protect our climate and our health.

Let's start by urging Volkswagen to oppose any Auto Alliance efforts to weaken vehicle efficiency standards. Take just one moment to click here to send a note to Volkswagen and demand the company moves forward, not backward, on cleaner cars.

Another effort Americans worried about climate and air pollution under a Trump administration can make is to take matters into their own steering wheels and make the switch to cleaner cars (see Sierra Club's online EV guide here). There are lots of important ways to make statements to corporate and government leaders about the direction in which we want our country to travel.