These reforms must ensure that future vehicle approvals and emission tests are independent, transparent and reflect real-life driving conditions. Volkswagen must stop the lies and repay the public trust, while governments must act robustly and ensure we breathe cleaner air.

It's a scandal of enormous proportions: VW installed sophisticated cheat software in almost 11 million diesel cars to fool pollution testers. It will take the company until at least the end of 2016 to either fix the cars or offer owners replacement vehicles.

The deception means far greater than expected levels of harmful nitrogen oxide (NOx) were spewed into the air from Volkswagen cars over a period dating back as far as 2008, posing heightened risks to public health.

NOx emissions, and its derived substances such as ozone, can trigger asthma and cause lung diseases, according to the World Health Organisation. These emissions are also linked to increased incidence of heart disease and premature deaths. People are especially at risk in cities and near major arterial roads. 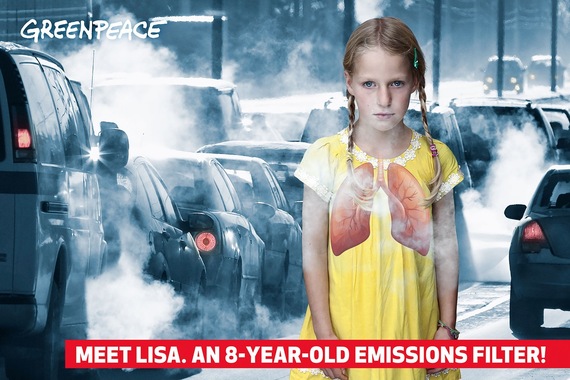 It is an uncanny coincidence that it was Volkswagen, a familiar foe for Greenpeace, that was caught rigging the emissions of its diesel cars. In 2011 Greenpeace had already highlighted how the company was using its power to lobby politicians against emissions targets.

The company is now facing billions of dollars in recall costs, brand damage, lost sales, fines and possible lawsuits. Ratings agency S&P downgraded Volkswagen and the company's share price slumped by as much as 43% between 18 September and 2 October.

The fact that Volkswagen alone was caught cheating, however, doesn't mean that other cars are any cleaner. The dieselgate scandal has shown that official test results have less and less in common with real-drive emissions.

The car industry as a whole is willing and able to manipulate regulators and cheat pollution standards to the detriment of public health, the air we breathe and the environment.

Official emission tests results as well as fuel consumption data provided by carmakers have for years differed drastically from actual levels on the road. The majority of cars on our roads are far dirtier than they are on paper - many of them are dirtier than legally allowed.

This has been possible because manufacturers have in the past been able to exploit countless loopholes in regulations. But there is a solution: legislating honest emission tests!

This discussion is already taking place in Europe amid public outrage at Volkswagen's actions. European Union ministers are discussing the introduction of new emissions tests, which should take into account real driving emissions (RDE).

But carmakers are again lobbying for delays and loopholes, such as securing a maximum level of permissible deviations between real driving emissions and official lab test results.

We cannot sit back and allow the industry to hold our health to ransom. We demand that governments introduce real driving emissions tests instead of idealised laboratory tests and to revoke approval for cars that do not comply with emissions standards!

Carmakers must finally be forced to disclose the real health and environmental consequences of their cars. Our health and our climate depend on it.