The boy is dancing, his moves more jerky than funky. I call him The Dancer, partly because of his disco-kung fu motions, partly because I don't speak Chinese. I'm volunteering for two weeks at a special needs school in Xi'an, China, and I can't pronounce his name (or anyone's name), nor can I decipher the teachers' baffling flurry of Chinese Chinese Chinese. I communicate through gestures and a persistent if puzzled smile, but the Dancer doesn't seem to mind. He stares at me, our eyes locked, then takes my hands. We swing them side to side.
The classroom buzzes with squeaks and sobs; a tinny children's song chirps from a stereo. A teacher escorts him to a chair.

He says this often. I don't know what it means. My first day at the school, he pointed at me, his face sad.

The Dancer, like many of the children here, is autistic. Others in our third-grade class have more severe developmental disabilities, and with each day I feel more helpless than helpful. I wonder if coming here was a mistake. I've wondered this everywhere I volunteered. I started in New Orleans, helping rebuild homes nine months after Hurricane Katrina. A few months later, my wife Julie and I taught English at an elementary school in Costa Rica. After China, I'll assist scientists studying a remote Ecuadoran cloud forest and work in a Palestinian refugee camp near Bethlehem. Then, assuming she hasn't left me, Julie will join me in Kenya to work at a children's home.

I'm here because I'm trying to live a life that matters. Because my father, the best man I've ever known, died suddenly, a heart attack stealing his life. I'm here because it seems I'll never be a father myself. And so I find myself asking questions.

How can I tackle my grief? What am I supposed to be?

My father traveled to China almost 25 years earlier on business: a road trip from Hong Kong to Guangdong. It was his only trip to China, and driving through the green countryside, seeing China's poverty and immense potential -- it was the most memorable trip of his life. I was 39 when he collapsed. He finished 18 holes of golf and then...he was gone. Gone in the time it takes to clutch your chest. The time it takes to hit the earth.

His grieving friends sent letters, each with the same theme.

Your father changed my life.

He grew up poor. Never went to college. But he was ambitious and smart, and he reached upper management with a series of medical electronics firms while never forgetting his impoverished roots. In his own quiet way, he helped those around him. "Remember, Budo," he once told me, using my old family nickname, "you succeed when others succeed."

A man at the school reminds me of Dad. The same thinning hair, the same slight belly. I assume he's a grandfather. He's with a child I dub the Buddha Boy. The Buddha Boy is 5 years old, maybe 6. He smiles as if incapable of sadness, a smile that could sell cereal or toys on television.

The boy has cerebral palsy. He raises his hands above his head, and the grandfather grips them, guiding the boy, his frail legs wobbling, noodlelike, with each step. If the man let go, the boy would fall. But of course he does not let go.

Every afternoon, when the kids return from naps, I wash their faces and hands and help them brush their teeth. One by one we leave class and walk to a sink -- they each carry a plastic bowl with washcloth and toothbrush and toothpaste -- and inevitably I get soaked. The kids frequently run the water full blast, despite my efforts to stop them. The wetter I am, I soon discover, the more convinced the teachers are that I've done a good job.

When it's the Dancer's turn, he carries his bowl with a bland disregard, until he spies himself in the mirror. Suddenly he's jumping and squealing, arms flailing.

"Hey -- jeez -- let's settle down," I say, though my English has no effect. He acts chimp-like: hands over his head, face close to the mirror. Somehow he finishes brushing, then blasts the water into his cup. And he does it again -- splash -- and again.

I take control, affectionately forceful, wrapping an arm around him, pressing him against me, washing his hands and face with my free hand. He's a sweet kid, though I've been collecting wounds from the unpredictability of the children's conditions; bite marks and scratches, a growing assembly of scabs. And yet I've grown fond of the students, and the kind teachers who are caregivers, wrestlers, therapists.

I push up the sleeves of the Dancer's jacket and scrub his arms.

"Baa-baaaa," he says back in the class.

That weekend I walk with some other volunteers along Xi'an's ancient city wall. One of the volunteers speaks some Chinese and asks about the school. I tell her about the Dancer, how his parents are divorced, how he gravitates toward men.

"Hey, you speak Chinese," I say. "He says baa-baaa a lot. Any idea what that means?"

I don't look at the Dancer the same way after that. I'd always felt some connection with him -- the way he stares with those sad, penetrating eyes -- but I see now we are kindred spirits. The boy who longs for his father. The man who longed to be a dad.

I'd like to find his father. I'd like to hurt his father. This isn't like me, but I feel anger. Outrage that some self-centered jerk would abandon this sweet, sensitive kid. I've heard multiple stories of fathers who left their families after learning a child was not "normal."

And then I think... who am I to judge? In four more days, I'll be another man who has entered his life and left him behind.

The grandfather carries Buddha Boy on his back up the stairs. He takes him to class, where the kids practice a Special Olympics game. Squares are drawn on the classroom floor, and students jump from square to square. The Buddha Boy raises his arms, and the grandfather holds his hands, lifting him into each square. The teachers cheer.

I don't see the grandfather every day. When I do, it's for seconds at a time. And yet I admire him. I admire his devotion. I envy it. I envy his dedication and commitment; his determined, unyielding love.

In his book "Stumbling on Happiness," Daniel Gilbert, a Harvard psychology professor, determined that most parents aren't happy when dealing with their kids. That's because parenting is work. Tiring, stressful, frequently irritating work. And yet many parents say their most profoundly happy moments involve their children: a transcendental happiness that extends beyond the day-to-day.

For all the burdens the grandfather must suffer, I know he has experienced transcendental happiness. In his own mellow, mild way, he exudes it.

So here is my final memory of the Dancer. After he runs around the room, shouting, arms flailing -- knocking down books from a shelf -- a teacher rearranges the desks to confine him. Making the best of his detention, he contemplates a puzzle, attempting to put shapes -- circle, square, triangle -- into corresponding slots. It's a puzzle my 3-year-old nephew can manage in minutes, but the Dancer, a third grader, is stumped. He puts the square against the circle. The circle against the triangle. Then, aggravated or bored, he chews it.

Next we play with plastic blocks -- like Legos, but flatter and curved. They connect at their ends like jigsaw pieces and we link them in a long squiggle across the desk. And then he does something amazing: he connects the pieces vertically, building up instead of out.

I'm stunned. It never occurred to me build up. Your instinct is to connect them flat. Moments ago he failed a puzzle a 2-year-old could handle, now he's thinking in an original, inventive way.

And maybe that's the secret. To solve the puzzle that's life, we find new ways to fit the pieces.

The Dancer and I both have amazing women in our lives. I will never meet his mother, but she's a single mom raising an autistic child. And I am so lucky to have my wife. We've known each other since sixth grade, we've been married 20 years, and as I walk Xi'an's packed streets, I'll repeatedly think, I'll have to come back with Julie. Like I haven't really been here if she isn't with me.

I'd wondered how I could live up to my father's life when I'm not a father myself. But we live up to those who shaped us by honoring their strongest values, by caring for those we cherish, and caring for those that they cherished. By helping others succeed, as Dad once said.

I smile at the Dancer. He seems unaware that his puzzle construction is somehow unique.

I hope that despite his blank expression he can see how happy I am, and see me applauding, and somehow understand.

You can follow Ken Budd on Twitter. Budd is donating his earnings from his book, "The Voluntourist: A Six-Country Tale of Love, Loss, Fatherhood, Fate, and Singing Bon Jovi in Bethlehem," to the organizations where he volunteered. 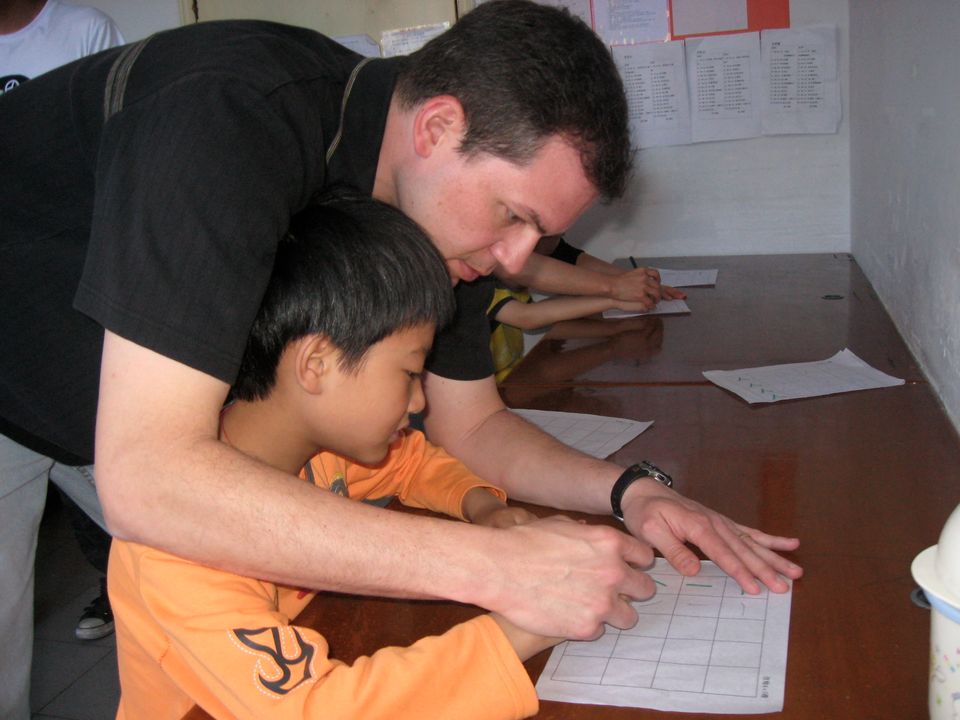