USA Today reported today that the number of volunteers in America dropped by 600,000 from last year, bringing the national volunteering rate down by a half a percentage point, to 26.3%. The data was from Volunteering In America, a government website that tracks and reports on -- what else? -- volunteering in America. Last week, we got the new jobs numbers out, and although they weren't as cringe-inducingly dismal as expected, they still mean we have an unemployment rate at 9.1% This got me thinking, if more of us are unemployed, then shouldn't we have more spare time to do other things, like volunteering in our communities?

Volunteerism: it's not a function of spare time!

For a number of reasons, I don't really like to track the unemployment rate, but rather the civilian labor force participation rate. This is a measure of everyone of working age that is either actively employed or seeking employment. It doesn't include students, retired people, stay-at-home parents, people in prisons, informal workers, or people who have given up looking for work. According to the Bureau of Labor Statistics the current U.S. participation rate stands now at 63.9%. This is as low as it's been in the past 30 years. This means that more Americans (about 36% of us) are not working and not looking for work than anytime since the early 1980s. One might think that working-age Americans have more time on their hands than usual. 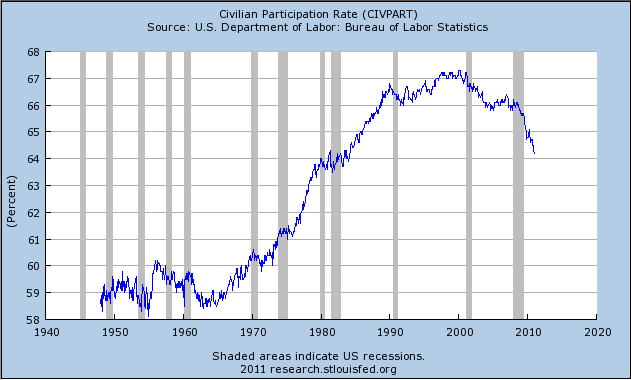 So, given that (1) there are a lot of Americans suffering in the current economy (2) both State and Federal governments are pulling back resources from social programs, and (3) it would appear that Americans have more time than usual to volunteer, shouldn't we expect to see rates of volunteerism up?

According to Volunteering In America, the national volunteer rate now stands at 26.3%. This is down from 28.8% in 2003, 2004, and 2005. In other words, there are over 2.5 million fewer Americans volunteering today than just six years ago. What's going on? Do people just volunteer less when they are unemployed?

According to the Bureau of Labor Statistics, that's exactly what's going on. In a report released earlier this year, between 2006 and 2010, employed people volunteered at a rate 6-7 percentage points more than unemployed people. So, we shouldn't be too surprised then that we see rates of volunteerism falling as unemployment rates increase.

If we were to graph unemployment rates and rates of volunteerism together, they'd make an "X", which reminds me, you should read my other post from today, "Generation X -- the heroes of volunteerism in America."