The following is an excerpt from Kurt Vonnegut: Letters [Delacorte Press, $35.00]. It is a letter written from Kurt Vonnegut to his first wife and childhood sweetheart, Jane Marie Cox. Cox and Vonnegut married after World War II, separated in 1970 and officially divorced in 1979. Written in 1966, this letter was sent from the author's new home in Iowa City, just before he began teaching at the University of Iowa Writer's Workshop. At this stage in his career, Vonnegut had already published a slew of short stories as well as Player Piano, The Sirens of Titan, and Cat's Cradle, which became a best-seller during his professorship:

Dearest Jane:
Your charming package of messages arrived this morning, made my love and loneliness acute. Such pangs. I’m a homesick little boy. I’m on the second ﬂoor of the sort of frame house Penrod lived in. It’s crazy— all the land these people have, and they build their houses chockablock on teeny weeny lots. Maybe they’re sick of land. There are alleys everywhere. I had forgotten how romantic alleys are. My apartment is like this: 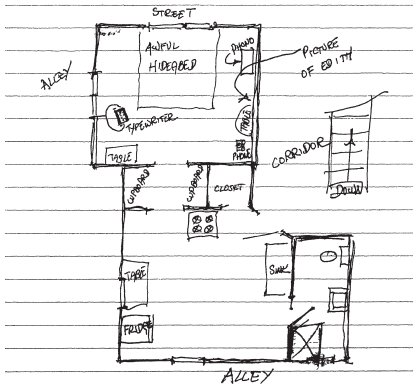 I like the apartment better each day. It’s friendlier than I thought— a nice, soft old shoe. I work well in it. I’ve already managed to send off a big part of the Rosewater treatment to Harrison. That whole package, which is more a complete scenario than a treatment, should be ﬁnished in ten more days. It should be worth some money to us. It’s full of brand new Rosewater lines and situations—had to be, since a book is a book and a film is a film. It’s kind of a sequel.

I will tell you what I really like: the looks and the feel of this town. The university is right in the middle of it, and the town exists only because of the university. The idea is medieval and exciting and beautiful. Dexter [Leon] would faint for joy. Give him my love, by the way. I can and do walk to all the stores and to work. The Unitarian church is a block away, and I went last Sunday. It’s a great club.

I don’t make my professorial debut until tomorrow afternoon. All that’s going on now is registration. I have yet to make new friends. I’m a laggard that way. Things will start bubbling tomorrow maybe.

Love you
K (over)

P.S. About your coming here: The stunt is to ﬂ y to Chicago, then Cedar Rapids, and I’ll pick you up there. Chicago is about 350 miles away. We can have a very nice time here. You say when.