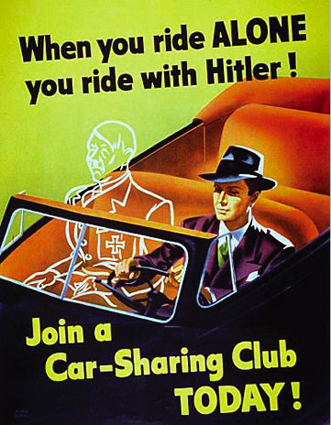 We tend to romanticize the mobilization that occurred after December 7, 1941.

Congress unanimously approved F.D.R.'s next day Declaration of War, governors around the country cabled in offers of help, and volunteers of every gender, color and class flooded the offices of recruiters.

War is easy. It's dramatic. It's clear. Everyone feels good getting behind it, unions and bosses (at least in public) toe the line, and every little individual action becomes imbued with interconnected responsibility. Save that scrap of metal! It could make a bullet. To drive alone is to drive with Hitler! Don't waste fuel. Grow food in your backyard and save resources for Victory! Basic materials--rubber, hosiery, tin--were rationed. Driving for pleasure was banned (something unimaginable at present). Auto makers in Detroit were called to the White House, where they were informed that they would stop making autos, and citizens would be banned from buying them. Overnight, the machine of war had coalesced.

But in actuality, America, that "arsenal of Democracy"--whose tanks, planes, boats, guns, soldiers and raw materials buoyed our broke if not broken, beat if not beaten British Allies--had been gaining steam since 1939 (when F.D.R., conniving against domestic complacency, finally offered the Lend/Lease "hose" to Churchill and the bombed-upon heroes of the recently-mighty British Empire).

F.D.R. was a once-in-a-century persuasive leader--but even he had to resort to a technically-illegal machination just to get our Allies some guns and boats. Not until Pearl Harbor did he gain the backing of Washington and ordinary citizens on both sides of the aisle. And an amazing thing happened: the United States, fighting The Great Depression for over a decade, suddenly reduced unemployment to nothing. G.D.P. increased manifold; wages and profits soared. It turned out that the war effort--with loss of blood, iron, steel, oil--was great for business, an economic godsend.

Just a few years before Pearl Harbor, the few soldiers in isolationist America trained with broom handles. Our airforce could've fit in a single hangar, our tanks hailed from WWI and our boats were floating jokes. It's an instructive period of history, now, as an unconvinced nation ("Drill, Baby, Drill!"), and world, burns itself up. We read about green-this and green-that everyday--or used to, before we got sick of all the greenwashing (Ford, which likes to talk about its factory's green roof, has a lower overall m.p.g. than it did in 1913). Fact is our nation's carbon footprint increased this year, despite all the green talk; the homes on either side of mine leave their lights, fans, and A.C. or heating on when they drive off in their super-size-me trucks and S.U.V.s; and India, Russia, China are only beginning to buy into the modern capitalist consumer frenzy that we've been selling 'em for decades.

Collapsed ice shelves and suddenly rising seas. Withered crops, vanished rivers, rampant tree-killing bugs. It's a matter of time. If we want to act before another Pearl Harbor, 9/11 or Katrina strikes, we need coordinated governmental action.

Recently, I interviewed Lester Brown. It was probably the most important interview I've had the honor to conduct in 6.25 years of building my little magazine to a level where it might, someday soon, reach a platform from which we might inspire some real change. Lester Brown calls for a national mobilization, the likes of which we haven't seen for 67 years. And while he's appreciative of our generation's Churchill, Al Gore--a voice in the wilderness whose calls for governmental action have fallen on deaf ears--Lester Brown doesn't see a great green grassroots movement effecting change quickly enough.

It's a time for leadership. "Bipartisan" is a nice word, but those who practice it are derided by their friends, and not supported by their enemies (just ask John McCain circa 2000). Leadership can do what you cannot--it can mandate a minimum m.p.g. of 50, something easily accomplished in this greatest of technological cultures. It can mandate C.F.L.s, energy star appliances, lawn-watering only before dawn and after dusk. It can give real incentives for fuel-efficient cars, trucks and S.U.V.s, and for solar, wind and other truly clean, renewable technologies (I do not include 'clean' coal or nuclear power on that list). Building the new, sustainable economy we'll need to ameliorate Climate Change will create "green collar jobs" by the tens of thousands--solar, wind, auto, farming--the kind of work that can't be outsourced to China, Vietnam or India--but it'll take the kind of support we gave to the 1956 Interstate Highway System, the Manhattan Project or J.F.K.'s 10-year moon mission.

But as good democrats say, we get the leadership we deserve. Recently, my friend Jared Polis won the Democratic primary (and, in my bleeding-heart liberal district, he will effectively run unopposed in the general election) with only a small percentage of registered voters--because only half of my district bothered to vote.

And so it's the good old chicken and the free range egg. Rise up, people power, this November the 4th--and we just might get the leadership we need. Then, for the sake of the next seven generations, let's keep the pressure on.

Yours in the Vision of Enlightened Society,