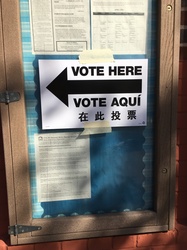 My grandfather, M. Phillip Freed, was arrested in Philadelphia in 1950 on a complaint that he had been "interfering with orderly voting" and for inciting a riot of about 500 people outside of a polling place. Seven years later, he would be elected to the bench as the first magistrate in Philadelphia to hold a law degree. But at the time of his arrest, he was the Democratic Chief of the 20th Ward. The main complainant was his GOP counterpart, who my grandfather had accused of voting irregularities in past elections.

Sound familiar? It's hard to say whether we've reached a new low in political campaigns, but it sure feels like it. In particular, the polls in Philadelphia have been singled out by the GOP candidate as the number one place to guard against "voter fraud," but efforts to send poll watchers have been rejected.

It brings to mind the cynical phrase, "Vote early and vote often," which is attributed to three different Chicagoans (all notorious for their manipulation of the democratic process)--Al Capone and mayors Richard J. Daley (1955-1976) and William Hale Thompson (1915-1923 and 1931-1935).

My grandfather was known for getting into skirmishes with then police chief, Frank Rizzo (later mayor of Philadelphia), and a young brash Assistant D.A. named Arlen Specter (later Senator of PA). That Election Day, when he was brought before a judge, he explained that the reason he felt compelled to make his presence known at the polling place was because earlier that day a Republican judge of elections had been charged with "giving illegal assistance and unlawfully interfering with a voter." At another site in the same division, a retired bricklayer said that on three different occasions while he was waiting to vote, he saw a man slip into the voting booth with other people who were voting. A woman clerk of the election division board reported on intimidation tactics saying that Republican workers actually walked into booths despite objections of the voters and helped them to vote. My grandfather asked that all the votes in that division be thrown out. An investigation was ordered, which revealed that 100 more votes were recorded than persons who voted. The court later discharged him.

This campaign season there's been a lot of talk about what makes America great. Let's start with the opportunity for our voices to be heard through the act of voting and supporting a fair and respectful election process.

This November 8, as I make my way out of the mire of negative campaigning, cynicism and allegations of corruption, which are as old as democracy itself, I plan to vote early... but not often.