Greetings from behind the Tinseltown curtain. I just finished watching my favorite new reality show, the evening news. Every night, on every twenty-four hour news channels, they all play their new hit show, "The Biggest Loser." The lead character is a great archetype, a villain and a total chump, that's tough, yet wrought with insecurities. He is unapologetic, yet completely insecure about the fact that he's bald as an eagle, evidenced by a comb-over that would rival Homer Simpson, "D'oh!" I love this show!

The lead actor has taken PT Barnum's, "Any publicity, is good publicity," slogan, to new heights. Forget "House Of Cards," this is binge watching! Unlike Frank Underwood, America's favorite new political reality television star, is willing to take on impossible tasks, like stand up to super powers. He even wants to build a two thousand mile impenetrable wall, at a time when immigration, is at a net zero number. Yet our favorite grump, is such a misogynist, that he wont allow women to question his authority. Now that's a character that has staying power. I wouldn't be surprised if he were even a shareholder in the huge transnational Mexican bakery called "Bimbo," as he seems to gravitate towards that word all too often.

His position on immigration is so insane, that the networks are considering giving him a new spin off reality series called... wait... are you ready for it? "America's Top Mussolini." In the promo, he sits on his rump on the turret of a tank aimed at Mexico, looks at the camera and shouts out his classic tag line, "Go back to Univision."

Okay, so the writing on the show has a few weak spots. For example, every time the character is in a slump and needs to do a press conference, he talks about his favorite book being the Bible, yet no reporters seem to have the sense to ask him to quote his favorite biblical passage. If one actually asked that question, I'm guessing there would be silence, flowed by one of his classic character lines, where he turns it back on the reporter shouting, "My favorite passage? What's your favorite passage? Loser! Have you seen my poll numbers?" He seems really obsessed with the size of his pole. My psychological experts on this subject say its quite common for people like him to try and make up for their deficiencies.

Many of his critics including those from his own Republican network complain that he's out of control and they should dump the show, but don't be fooled. He is ratings GOLD. As long as he's on the air, happy days are here again. Do the twenty four hour news channels really want to take away valuable air time from him and give it to those other boring reality shows like, "Chris Christie's Jersey Shore," "Jeb Bush's Naked and Afraid," Here Comes Huckabee Boo Boo," and of course my favorite, "Rand Paul's Drag Race"?

If the news networks really wanted to cancel his show, I guarantee they could get over that hump on a moment's notice. I would imagine they have enough dirt on him, that it's probably kept in alphabetical order, just waiting for the day. But why ruin a good thing when everybody can enjoy the fruits of this eventual train wreck? Besides they can't complain about a TV character that is such a press junkie, when they have the Keystone pipeline full of free PR heroin flowing into his narcissistic veins.

So if some day, the media outlets decide that love of country, is more important than love of ratings, all they really have to do to cancel this show, is STOP COVERING HIM, its that easy. Silence will kill the beast! He would then return back to the sump from which he came. If the twenty-four hour channels are so addicted to Nielsen Kool-Aid, then perhaps they should start an exploratory committee to create a real competitor for our current flavor of the day, hmmm, how about Kim Kardashian for President or better yet, Vote for Pedro!

Pedro from Napoleon Dynamite, would never do something so stupid as to try and deport eleven million people. He instead might inform frightened Americans, that immigrants paid over one hundred billion dollars into social security in the last ten years and will never get any of that money back. Instead that money is going to help support all the people that want to get rid of the immigrants, talk about irony. Pedro would probably focus on important things, like education and jobs and assure everybody that it's okay that America doesn't look like a Norman Rockwell painting anymore. He might even tell everyone to not be afraid, cuz a silly wall is not going to protect any of us, from the boogey man.

If he became President, perhaps Pedro could educate people about how the first time amnesty was ever granted, was to Confederate troops, by Abraham Lincoln. Their crime was for treason against this country, which apparently was not as horrible as some poor bastard wanting to come here and mow someone's lawn, for little money, so he can feed his wife and kids.

In the immortal words of Pedro, "Vote for me and all your wildest dreams will come true." 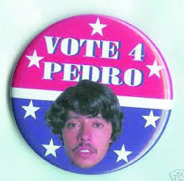