Many of the world's most accomplished scientists might find sleep a bit difficult during the week of October 5th. They know that, beginning on that Monday and over the following days, the calls go out from the Nobel Prize committees, informing a select few researchers that they have won science's highest honor, signaling that their lives will never be the same.

Annually since 2002, in honor of the Nobel Prizes, Thomson Reuters has presented a new group of Citation Laureates--researchers whose work has earned measurable esteem and distinction among their peers, based on the frequency with which their reports are read and footnoted, or "cited," by other scientists. A high citation rate is a clear mark of significance and influence, and thereby serves as a main criterion in selecting scientists who are "of Nobel class," likely to win the top prize now or in the future. 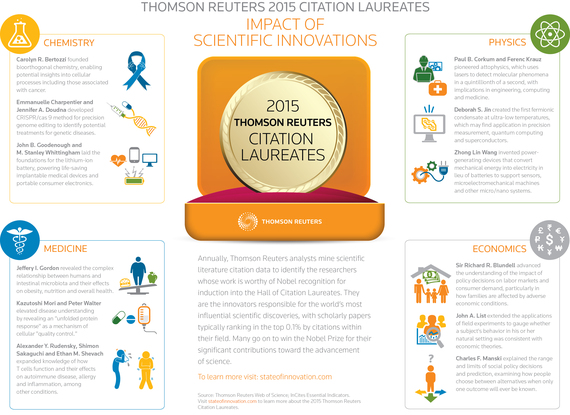 Download this infographic to learn more about the 2015 Citation Laureates.

For another year, publication and citation data on scientific research from Thomson Reuters Web of Science, which covers the sciences, social sciences, and arts and humanities, have produced a new batch of Nobel-worthy names.

The 2015 class of Citation Laureates joins an elite corps of previous picks. Most still await the call from Stockholm, but many have fulfilled the prediction suggested by their quantifiably influential work. In fact, since 2002, 37 Citation Laureates have gone on to win a Nobel Prize. That number might well rise this year--either from this newest group or from previous selections.

This year's predictions adds a new element: a "People's Choice Poll," allowing one and all to choose from among all the previously selected Citation Laureates and to register their votes for this year's Nobel Prizes in the categories of Physiology or Medicine, Chemistry, Physics, and Economics. Anyone interested in voting for their own Nobel picks will find the "People's Choice Poll" at Thomson Reuters State of Innovation. Try your hand at predicting this year's prizes.

Also notable this year is the presence of four women among the new Citation Laureates. Since 1901, only 17 women have won a Nobel Prize in the sciences. This year's analysis of highly cited researchers demonstrated that women account for an increasing share of science's most influential research. The four women selected as Citation Laureates this year, compared to just six selections overall since 2002, attest to this progress.

Two of these women, Emmanuelle Charpentier and Jennifer Doudna, selected in Chemistry, represent one of today's most newsworthy scientific topics, having contributed foundational work to the gene-editing method known as CRISPR-cas9. This method, while providing insights into disease, also offers a "find and replace" capacity to rearrange genetic material, raising the possibility of literally rewriting genetic code to cure or avert disease--a potential that has provoked complex ethical questions and concerns.

Among the new Citation Laureates in Physiology or Medicine, Jeffrey I. Gordon has produced key insights into the relationship between the human gut and the trillions of microbial life forms whose normal presence in the gastrointestinal tract is an important component of health. Recent work has explored how imbalances in this symbiosis can contribute to problems, not only in digestion but in such unexpected areas as mood and other aspects of personality.

In Economics, Charles F. Manski explained the range and limits of social-policy decisions and prediction subject to the complications of partial knowledge and social effects--examining, for example, how people choose between alternatives when only one outcome will ever be known; this work has been applied in the study of medical treatments, drug laws, criminal sentencing, and other areas.

Other work by the new Citation Laureates accounts for essential findings on immune-system T cells; on the lithium-ion batteries that are ubiquitous in powering cell phones and other personal devices; and on so-called attosecond physics, which captures molecular phenomena occurring within one quintillionth of a second.

For a deeper dive into the real-world applications of 2015 Citation Laureates' research and discoveries, download the infographic.

PHYSIOLOGY OR MEDICINE
Jeffrey I. Gordon of Washington University School of Medicine in St. Louis
For demonstrating the relationship between the human gut microbiome and physiology, metabolism, and nutrition

Kazutoshi Mori of Kyoto University, Japan, and Peter Walter of the Howard Hughes Medical Institute and the University of California San Francisco
For independently identifying the mechanism by which unfolded proteins in the endoplasmic reticulum are detected and corrected

Alexander Y. Rudensky of the Memorial Sloan Kettering Cancer Center, Shimon Sakaguchi of Osaka University, Japan, and Ethan M. Shevach of the US National Institute of Allergy and Infectious Diseases
For their seminal discoveries concerning the nature and function of regulatory T cells and the transcription factor Foxp3

PHYSICS
Paul B. Corkum of the National Research Council-Canada Research Chair in Attosecond Photonics, University of Ottawa, and Ferenc Krausz of the Max Planck Institute of Quantum Optics, Garching, Germany and Ludwig Maximilian University of Munich, Munch, Germany
For contributions to the development of attosecond physics

Deborah S. Jin of the National Institute of Standards and Technology and the University of Colorado Boulder
For pioneering research on atomic gases at ultra-cold temperatures and the creation of the first fermionic condensate

Emmanuelle Charpentier of Umeå University, Sweden, and the Hannover Medical School, Germany, and Jennifer A. Doudna of the Howard Hughes Medical Institute and the University of California Berkeley
For the development of the CRISPR-cas9 method for genome editing

John B. Goodenough of the University of Texas, Austin, and M. Stanley Whittingham of Binghamton University (SUNY)
For pioneering research leading to the development of the lithium-ion battery

John A. List of the University of Chicago
For advancing field experiments in economics

Charles F. Manski of Northwestern University
For his description of partial identification and economic analysis of social interactions