What does it say about us that the most effective counterweight to the Tea Party is not a political party or leader, but a comedian?

Will Jon Stewart's rally on Saturday impact the election on Tuesday? We hope so. Frankly, as professional sane people (cough cough), we have been slow to jump on this opportunity. Nearly one thousand rallies have been organized all over the country three days before the election, and the best part? We didn't even have to organize them! It's freaking amazing. All we have to do is show up and leverage the opportunity. But most of us are too busy doing our regularly scheduled Get Out The Vote activities to see this opportunity for what it is and seize the moment to make our message relevant in popular culture. 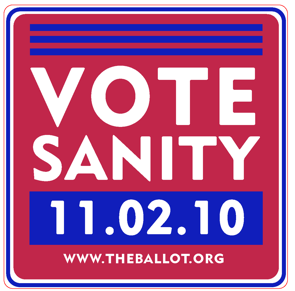 We're calling our campaign VOTE SANITY. We have 50,000 large VOTE SANITY stickers and a bunch of signs for people to wear at the rally and then take home. We also have "I Voted Sanity" images for people to use as Facebook profile pictures, some hilarious videos and websites like Welcome to Crazytown, and Young Voters: A Bigger Threat Than Bears, a Crazytown Quiz, and an actual ahem, totally scientific and unbiased vote that will be taking place in the crowd and online where people have the choice to "Vote Sanity" or "Vote Fear." It's all thrown together fast but the idea is still pretty cute. The VoteFear.com website is sponsored by Republicorp. Then right after the rally, on Sunday, it's Halloween and Trick or Vote is ready with a huge nationwide canvass-in-costume.

Don't get us wrong. We have nothing against crazy people or scary monsters. Some of our best friends are crazy scary monsters. We just don't want to wake up on Wednesday morning and find out that they are in charge of our government again.

Vote Sanity is clearly a great message for all of us to be using right now. Not that we need to drop all our other messages. But we do need to become more nimble. I'm actually working 24/7 on another project right now called TheBallot.org which aggregates all the local progressive voter guides in the country --it's a really important project. Every progressive voter in America needs a voter guide. I'm not about to drop this for Vote Sanity. But the beauty of Vote Sanity is that it connects perfectly with any other progressive message. See, here's a Vote Sanity logo with TheBallot.org on the bottom. You can do the same thing.

On behalf of professional leftists everywhere, I apologize for not starting earlier. We could have printed five million stickers and posters, sent some to your town, gotten on TV and made this really big. In the meantime, we encourage you to spread these images online and make your own Vote Sanity stickers, signs, images, videos, designs and tweet them @votesanity.

If you're attending the Sanity rally in DC, we'll be meeting up at 7th Street and Madison Drive NW from 9am - 11am to pass out 50,000 stickers. If you're not coming to DC, please use the VOTE SANITY image as your Facebook profile, make your own posters and get on local TV.

In fact, go crazy with it!

Don't get us wrong. We have nothing against crazy people. Some of our best friends are crazy. We just don't want to wake up on Wednesday morning and find out that they are in charge of our government.

So whatever else you do, please Vote Sanity on Saturday AND on Tuesday.

The sanity of our county depends on it.