A new study has found that support for voter ID laws, especially among those who lean Democratic, is linked to one's feelings toward African Americans.

In the study, conducted by the University of Delaware's Center for Political Communication, respondents were asked several questions, and their answers were used to create a spectrum of "racial resentment." The more resentment a person conveyed, the more likely they were to support voter ID laws.

Voter ID laws require people to show some form of government identification before they can cast a ballot. According to the National Conference of State Legislatures, 32 states have some form of voter ID law, with varying degrees of strictness. Since Republicans won control of 20 state governments in the 2010 midterms, at least 11 states have pushed through voter ID laws. Supporters of the laws say that they help prevent voter fraud, in spite of the fact that studies have shown electoral fraud to be exceedingly rare.

Black, Latino, low-income and younger voters are all less likely to have official government identification -- and are all also more likely to vote for Democrats.

"These findings suggest that Americans' attitudes about race play an important role in driving their views on voter ID laws," said Paul Brewer, one of the researchers who supervised the study.

"Who votes in America has always been controversial, so much so that the U.S. Constitution has been amended a number of times to protect voting eligibility and rights," said David Wilson, the study's other supervisor. "It comes as no surprise that Republicans support these laws more than Democrats. But what is surprising is the level at which Democrats and liberals also support the laws." 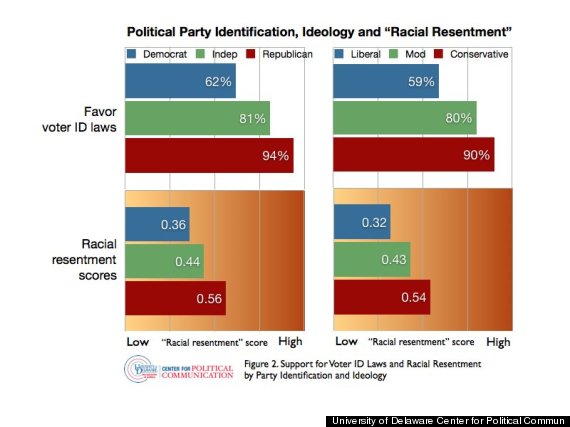 A report by the Brennan Center for Justice at the New York University School of Law found that up to 500,000 people in 10 states will face serious hurdles to vote this fall.

Texas' voter ID law is the focus of a federal lawsuit filed by the Justice Department and civil rights groups that contends the policy disenfranchises voters. Lawyers on both sides made their closing arguments last Friday.