As I wrote in a previous article, one of the big advantages that Senator Barack Obama has going into this year's election is the tremendous amount of support he's getting from new, young voters. If you travel to college towns and visit the Obama headquarters there, you inevitably see them staffed almost entirely with people under the age of 30. His appeal to young voters is well-documented. For example, the Wall Street Journal reports that 61% of new voters support Senator Obama compared with 30% for Senator McCain, a 2:1 margin.

Because of this, voter registration groups in college towns in Michigan have been extremely active. My daughter who attends Michigan State University (MSU) tells me that, walking down the main street, Grand River, students with voter registration clipboards are ubiquitous. "They're almost going overboard," she told me. "They're actually starting to drive people crazy!"

To find out how effective the voter registration drive has been in Michigan, I called the City Clerks in Ann Arbor, home of the University of Michigan, as well as in East Lansing, home of MSU. These two universities are our two largest schools. East Lansing City Clerk, Nicole Evans, told me that they have received 6,616 new registrations since September 8. In Ann Arbor, City Clerk Jacqueline Beaudry reports that since September 1st, her office has processed approximately 6,900 new registrations and has backlog of about 2,000 more to be processed. These are startling numbers for a single month.

With Michigan's voter registration deadline rapidly approaching, Senator Obama visited our state on October 2nd and made an appearance on the campus of MSU. There he exhorted the students to not only vote but to get others to vote as well. "I know you're going to vote," he told the students. "But you have to get your Aunt Pookie out to vote and your cousin Ray-Ray sitting on the couch."

NOTE: this panoramic image is fully interactive, going all the way up, all the way down and all the way around. Use your mouse to drag in the direction you want to spin the image (including up into the sky and down to the ground.) You can also use the buttons to do these actions. Clicking "FULLSCREEN" gives the most dramatic effect, allowing it to fill your screen with a high resolution interactive panoramic image.

The final piece for this equation will come on November 4th and the days leading up to it. In Ann Arbor and all around the state, the Get Out The Vote plans involve an unprecedented effort to contact voters who have been identified as supporters to ensure they have voted. The Obama campaign is taking no chances and they are very confident that, this year, they will turn out young voters in historic numbers.

Here are a few more images from Senator Obama's visit to East Lansing. A full slideshow is available HERE. 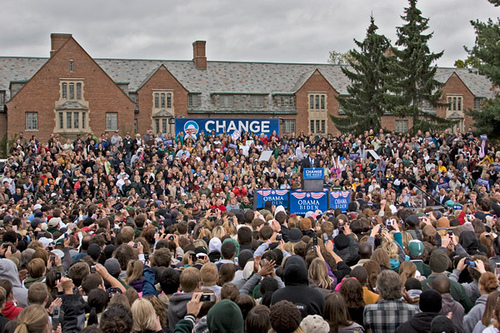 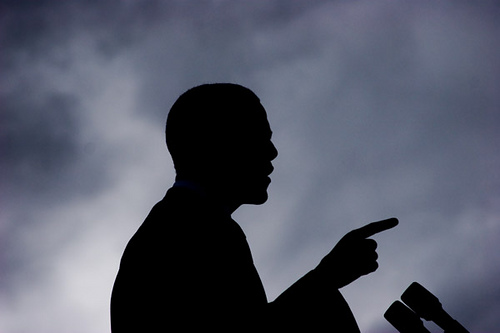 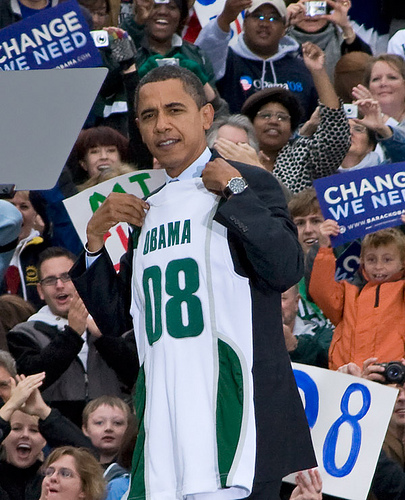 All photos by Anne Savage/Revolutionary Views.