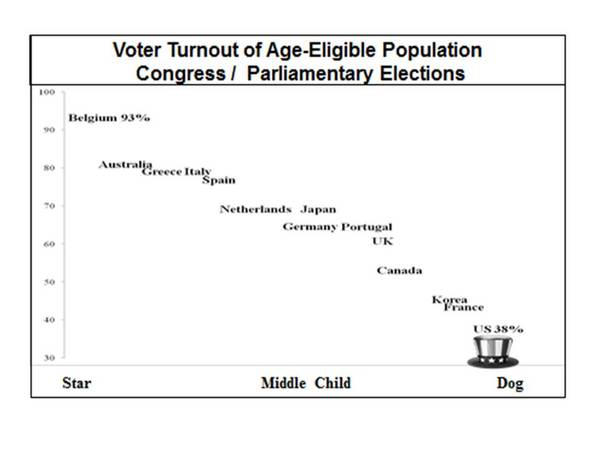 The high voter turnout in Australia is due to its strictly enforced laws; no-shows at the polls are fined. Belgian law has a provision for disenfranchising voters who repeatedly fail to appear at the polling station. While this legislative pressure to turnout works in Australia and Belgium, mandatory turnout laws go against America's cultural grain. After all, as the saying goes, "not voting is a vote," and making it mandatory would strike most Americans as removing a right. Moreover, people driven to the polls out of fear of a fine will vote with an indifference that in no way advances meaningful participation in the democratic process.

This opens a different question, why don't so many Americans vote? There are countless explanations: absence of trust in government, the degree of partisanship among the population, lack of general interest in politics, institutional barriers to voting, convenience, and a failure of faith in the true effect of voting.

Convenience impacts voter turnout. In the United States, in all but one state, voters must go through a separate registration process before voting, and the vast majority of states do not allow Election Day registration. This two-step process -- register, then vote -- is more complicated than the process in many other countries and discourages some Americans from voting. In Austria, Canada, Germany, France and Belgium, voter lists are generated from larger population databases or by other government agencies, thus simplifying the voting process. For example, Germans who are eighteen or older on voting day automatically receive a notification card before any election in which they are eligible to vote. In Canada, the income tax returns are used for voter registration. In the United Kingdom, every residence receives a notice of those registered within the household, and additional voters can be registered by mail.

By eliminating America's two-step process of first registering and then voting (something that is not a common practice in other countries), voter turnout would increase. The voting process can be further simplified by generating voter lists based on such preexisting government information as driver's licenses, income tax returns, and juror registration information. After all, using government-run population databases to develop voter lists has succeeded in Austria, Germany, France, Belgium, and Canada.

There are other measures that can also be taken to increase voter turnout. With "inconvenience" often cited as a reason for not voting, it's time to move to electronic voting and enhanced absentee voting including voting by mail to enhance the convenience factor. Oregon has embraced convenience in two major ways: first, by offering many ways for voters to register, including online, and second, by passing a 1998 ballot initiative requiring that all elections be conducted by mail.

Electronic voting is also likely to increase participation by younger voters. Across most nations, younger citizens are less likely to vote than older voters. With the United States being one of the youngest countries among its competitors, it seems reasonable that electronic voting could have a significant impact on the younger, more tech-savvy American voters. India (not one of the competitor countries) has succeeded in holding national elections using computer technology that was developed, is owned, and is operated by the Indian government. Surely the U.S. government can aspire to do as well.

A key goal in Measure of a Nation is to compare the United States to other wealthy countries, with the idea being to identify which countries are performing the best in each area of interest: health, safety, democracy, education and equality. In each of those areas, the countries that are performing the best are examined to determine which best practices might be applied here in America. Leading countries were labeled Stars and lagging countries were labeled Dogs.

In order to do this analysis, we selected the subset of countries that are both wealthy (nominal GDP per capita over $20,000) and have a population greater than 10 million (upper third of national populations, no city-state countries) as a comparison group. This comparison group consists of 14 countries: Australia, Belgium, Canada, France, Germany, Greece, Italy, Japan, Portugal, The Netherlands, South Korea, Spain, the United Kingdom, and the United States.

This article is based on excerpts from the recently released book The Measure of a Nation: How to Regain America's Competitive Edge and Boost Our Global Standing: