Latinos may not turn out to vote in high numbers, but Latin Americans do.

Early estimates indicate that total turnout for the U.S. voting age population in 2012 didn’t quite match the peak of 58 percent for 2008, the figure provided by the Census Bureau. But while 2008 was a historic year for the U.S., its voter participation pales in comparison to Latin America, where the turnout rate for presidential elections often exceeds 75 percent.

In 2008, 131 million people cast ballots in the U.S., according to the Federal Election Commission. As of late Wednesday, the day after Election Day, the Associated Press had reported that some 119.5 million people had voted for the U.S. president this year. Though 2012 votes have yet to be counted, some estimates put the number at 126 million, or a total turnout rate of roughly 57.5 percent.

Compared to turnout for presidential elections in 16 Latin American countries, that figure is only higher than Colombia (45 percent) and Honduras (53 percent), according to data compiled by the Institute for Democracy and Electoral Assistance.

(Check out the infographic below to see how the United States compares to other countries in the hemisphere.) 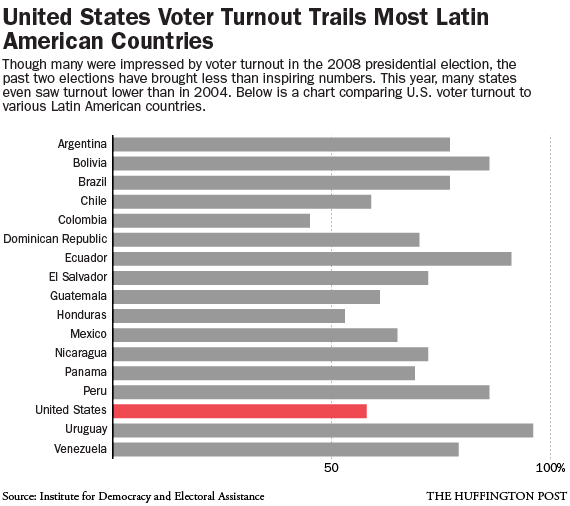 Tiny Uruguay registered the highest turnout, with a whopping 96 percent. More than 85 percent of the voting age population made it to the polls in the Andean countries of Ecuador, Peru and Bolivia.

The rules governing the vote aren’t the only thing impacting turnout rates across the hemisphere. Policy director of the Americas Society Chris Sabatini says the political polarization common to the region also pushes people to the polls. For example, a contentious election in Venezuela last month pitting socialist Hugo Chávez against the opposition candidate Henrique Capriles resulted in a milestone turnout of about 80 percent, according to The New York Times.

“A lot of people who don’t participate in U.S. elections don’t see a lot of difference between the parties and they don’t see their specific issues represented,” Sabatini told The Huffington Post.

That isn’t necessarily a bad thing.

“There’s a level of contentment that’s hidden in that,” Sabatini added. “With this campaign, people’s lives weren’t going to be turned upside down … In Venezuela, the stakes were real. There was a dramatic choice. There was genuine fear on both sides.”

Whatever the reasons behind the higher voter turnout in Latin America, they don’t seem to influence voter engagement among U.S. Latinos.

Only 49.9 percent of eligible Hispanic voters made it to the polls in 2008, compared to 66.1 percent of non-Latino whites and 65.2 percent of blacks, according to the Pew Hispanic Center.

Reports indicate that Latino voter turnout was strong this year -- with Hispanics accounting for 10 percent of the electorate, according to The New York Times -- but it continues to lag behind other groups.

There are several reasons for the poor showing, according to Mark Hugo Lopez, the Associate Director of the Pew Hispanic Center. For example, Latinos are concentrated in states where the electoral votes aren’t contested, like California and Texas, Lopez told The Huffington Post.

Perhaps most importantly, one-third of eligible Latino voters are between the ages of 18 and 29, a bracket that doesn’t tend to show up consistently to the ballot box. By comparison, only 20 percent of the eligible voters in the general population are in that age group.

“Youth looms larger for Latinos than it does for other voters,” Lopez said.