Turnout emerges as a theme in explaining what went wrong for Democrats last week. We round up some initial looks at how it affected the most surprising midterm results. And if you're not already ready for 2016, apparently you're in the minority. This is HuffPollster for Monday, November 10, 2014.

HOW LOW TURNOUT EXPLAINED SURPRISE IN VIRGINIA - Philip Bump: " In Virginia on Tuesday, a race that was expected to be a blowout wasn't, for the simple reason that, one, incumbent Sen. Mark Warner's (D-Va.) political scientists didn't get his people to the polls and, two, that the people who did go were less likely to vote for the Democrat….The drop, particularly in the Northeast, overlaps with where much of the Democratic growth in the state has been over the last decade."
[WashPost] 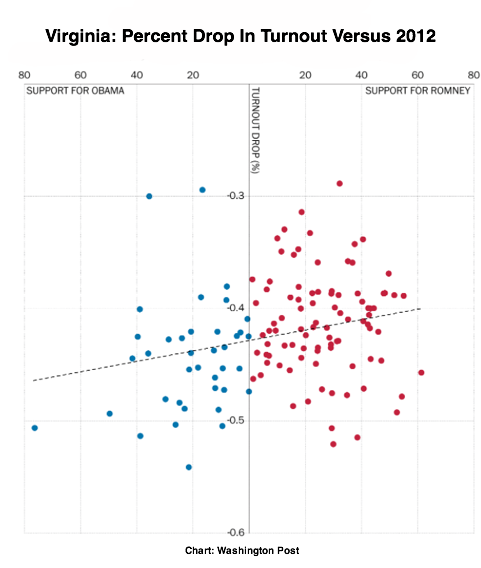 Turnout wasn't the story in Colorado either - Nate Cohn: "Low Democratic voter turnout has been blamed for the decisive Republican victory in Tuesday’s midterm elections. It has quickly become the scapegoat, even though the Democrats invested millions of dollars in an expansive effort to persuade young and nonwhite voters who do not usually participate in midterm election to head to the polls….in Colorado, Mr. Udall lost despite a better Democratic turnout than in 2010. So far, the state has tabulated 2.06 million ballots, or nearly 80 percent of the 2.57 million votes in the 2012 presidential election, according to an Upshot analysis of ballot tabulation data from the Colorado secretary of state. The turnout was nearly 300,000 votes higher than in 2010, when a strong Democratic turnout effort propelled Senator Michael Bennet to a come-from-behind victory….But Mr. Udall still lost. He certainly garnered less support than Mr. Bennet, and probably Mr. Obama, among unaffiliated voters. The results by county suggest he underperformed among Hispanic voters as well. There were other states where turnout would not have helped the Democrats."
[NYT]

...but confounds a pollster in North Carolina - Paul Garber: "A poll from Elon University had incumbent Kay Hagan with about a four-point lead heading into the election. Challenger Thom Tillis ended up winning by a little more than one percentage point. Ken Fernandez is the director of the Elon Poll. He says the poll results were based on some assumptions that turned out not to be true. 'I think that a lot of people, including myself, looked at the amount of national attention that was directed at the Senate race - the amount of money, record-breaking money,' he says. 'I was so confident that the turnout would be greater than 44 percent, which was basically 2010 which was sort of a sleepy midterm.' Fernandez says some issues developed late in the campaign that may have had an effect on the outcome. He points to the overturning of the gay marriage ban in North Carolina, the Ebola outbreak reaching America, and increasing violence in the Middle East. But he also credited the Republican ground game in getting out the vote." [WFDD]

WHY DIDN'T PUBLIC POLLS PICK UP ON THE GOP WAVE? SOME DID - Sean Trende: "[A]at least with the benefit of hindsight, there actually was a lot of evidence out there, both that a Republican overperformance should occur and that it was occurring. For some reason, the bulk of pollsters and analysts simply weren’t picking up on it….Back in February, I suggested that if the president’s job approval was at 44 percent among the electorate on Election Day (as it was, according to the exit polls), that the Democrats would tend to lose nine Senate seats….we had a pretty solid basis for believing that Democrats’ performance would mirror the president’s job approval overall, and if there were going to be a poll error, it should probably be in the Republicans’ favor. So why didn’t more polls show this?...First, for much of the late summer and early fall, the polls actually were converging on the fundamentals, as Democrats remained tethered to the president’s approval rating, while Republicans gained ground….Some pollsters really did catch the full extent of the trend. In individual races, these tended to be the local pollsters. In the Maryland governor race, the Baltimore Sun and Washington Post caught the narrowing, though those were surveys taken almost a month before Election Day and for some reason they did not retest the race. In Virginia, the college polls caught the narrowing. In the last week of October, we started seeing more and more pollsters releasing what looked like outlying polls: Selzer in Iowa, the University of Arkansas in the Natural State, Charles Franklin’s Marquette poll in Wisconsin." [RCP]

As did internal polling - David M. Drucker: "Contrary to the many public opinion polls that showed Democrats and Republicans deadlocked heading into Election Day, most internal campaign surveys were correctly forecasting the GOP rout….Properly predicting the correct partisan and demographic turnout model was the difference. Campaigns and party committees got it right, while many, though not all, of the public polls were wrong...This time around, Republicans took seriously the Democrats’ strategy to expand the midterm electorate. In private conversations, Republican strategists working targeted House and Senate races often revealed that their own surveys showed a closer race than what was suggested by the public data.…. in the homestretch of the campaign, Republicans started to notice that the voter data scores were revealing a crucial dynamic. The most likely Republican voters were also among the most interested in the upcoming elections, while the most likely Democratic voters were much less interested. On the eve of the midterms, previously cautious Republicans grew bullish. Democrats, whose data was just as impeccable as two years ago, saw the shellacking coming, too." [Washington Examiner]

AMERICANS ARE SURPRISINGLY EXCITED ABOUT 2016 - HuffPollster: "The 2014 midterms are barely over, yet most Americans are apparently ready to do it again, a HuffPost/YouGov poll finds. Fifty-four percent of Americans said they're looking forward to the next presidential election, and just 30 percent said they're not. Republicans -- perhaps anticipating the chance to replace President Barack Obama -- were particularly excited, with 71 percent saying they were looking forward to the 2016 contest. Fifty-nine percent of Democrats said they were as well. Independents, at 43 percent, were somewhat less enthusiastic….Given the choice between the political commercials that blanket battleground states before elections and the business ads always on the air, Americans went overwhelmingly for the latter. They were nearly three times as likely to say they'd prefer watching a commercial for a car dealership than one for a political candidate." [HuffPost]

HOW ATTITUDES TOWARD VETERANS HAVE CHANGED - Paul Herrnson and Kathleen Weldon: "A look at public attitudes about veterans' benefits, from the Roper Center for Public Opinion Archives: Veterans' attitudes about government benefits haven't changed -- but the public's have...A 1979 poll found that a third of Americans believed veterans of the Vietnam era had been given fewer benefits than veterans of WWII or Korea, while 35% said they received the same. Even equal benefit levels might not have been sufficient in the public's mind, however, since Vietnam vets were perceived by a majority as having more serious problems than vets from earlier conflicts….Strong support for veterans and a willingness to provide them with any needed assistance has become, in the years since the draft was ended, a central tenet of American values. Strong majorities support a variety of government measures to improve the lives of veterans, and almost no one thinks spending on vets should be decreased. Overall, Americans seem to be aware that current public support for veterans is relatively high." [HuffPost]

-Carl Bialik examines the divide between Republican and Democratic voters on major issues. [538]

-Few Americans have high hopes for the insurance exchanges next year. [AP]