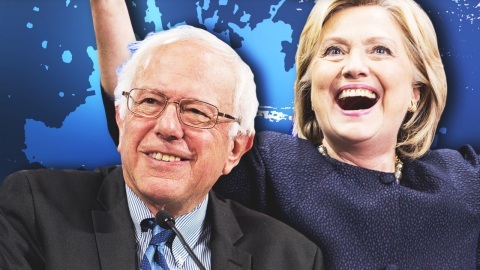 I'm not undecided anymore. I've wrestled for a long time with this decision, which I won't even have the opportunity to make (officially, at least) until April 19. When the New York Democratic primary comes on that day, I'm voting for Bernie Sanders. I don't agree with either him or Hillary Clinton on every issue, but of course that's never the case when voting. On the broad ideological spectrum, I come down somewhere in between the two of them on the issues where there is real daylight: Economic and foreign policy. I'm closer to Bernie overall than Hillary politically speaking, and that's, in the end, what leads me to vote for him.

There were other factors that, potentially, could have come into play. However, barring the kind of unforeseeable event that would lead the frontrunner to drop out of the race, the question of who will be the Democratic nominee has been decided. That reality, combined with polling that shows a consistent 20-point lead for Sec. Clinton in my home state, leaves me free to vote on the basis of my political heart alone.

Before I pivot to why I am--despite my vote for Bernie--also ready for Hillary, let me just say this: I think Bernie Sanders would be an outstanding president of the United States. He is absolutely right that there is one domestic issue that connects to just about every other important one, from racial injustice to the environment to consumer and worker safety regulations, and on down the line. That issue is the disproportionate amount of political power exercised by economic elites--by corporate interests and exceptionally wealthy individuals.

Whether or not a President Sanders could get the necessary legislation passed through what is likely to remain a Republican House--a caveat equally applicable, I would note, to any legislation proposed by a Democratic president in this environment--his laser-like focus on that power imbalance would likely bring real progress on that front in the long run.

First, President Sanders would have the power to appoint nominees to a whole host of regulatory and other positions. From the bully pulpit of the White House, he could also influence states to enact legislation on campaign finance and take other measures to shift power away from the top 1percent. Finally, Bernie's ability to bring new, in particular young, voters into the political process might well bring about the kind of "revolution" necessary to do things like re-take the House of Representatives, thus paving the way for legislation at the federal level.

As a progressive I want to take a moment to mourn the fact that, in all likelihood, Bernie Sanders will not be our next president. I will vote for him because, even though he will not be our nominee, the better he does, the more influence he and the progressive wing of the Democratic Party will have. I know that my one vote will not really have an impact on something as nebulous as influence, but that, of course, isn't the point.

In addition to shining a light on the issues about which he is so passionate, the most important thing Bernie has done in this campaign is force Hillary Clinton to move leftward, to embrace positions that are not only better for this country, but are more likely to get her elected president because they will motivate the Democratic base to get out and vote.

Another result of Bernie's candidacy is that it led Hillary to associate herself far more closely with the policies of President Obama than she had been doing previously, when she often sought to put at least some distance between the two of them. Of course, it's not just Bernie's challenge that led Hillary to do so. Barack Obama's job approval rating is now above water for the first time in two years, and, given the strong job market, it is likely to hold at this level or even continue to improve in the coming months.

Hillary's "embrace" of Obama was a smart move politically for both of those reasons. Just as it helped her in the primaries, it will help her in the general election. Back in 2014, some of her advisers expressed concern that Republicans would attack her by saying something like: "If you like Obama, you will love Hillary." The way things stand now, she could do a lot worse for a campaign slogan.

When it comes to voting, the smart thing is not to believe in love. In particular when it comes to presidents, falling in love on the campaign trail almost always leads to heartbreak after the inauguration. I'm not interested in looking for love (in all the wrong places).

I'm ready for Hillary because I am 100 percent convinced that she will be a far, far better president than anyone the Republicans will nominate. If that sounds simplistic, it is, because that's what every election should be about. Put aside the fascist demagoguery of Donald Trump, and the ridiculously extreme amalgam of Ayn Rand and Pat Robertson represented by Ted Cruz.

Compared to someone like, for example, John Kasich, a President Hillary Clinton would protect women's reproductive rights, protect Obamacare from being gutted, fight to appropriately fund domestic spending measures across the board--from Planned Parenthood to food stamps to job retraining for workers displaced by globalization. She would support an increase in the minimum wage, keep the tax code from being made more regressive, provide much more robust institutional support for the push against racial injustice, support equal rights for LGBT Americans, and wouldn't undo President Obama's rapprochements with Iran and Cuba. Those are just a few of countless issues on which Hillary Clinton would make a far superior president than even a "mainstream" conservative Republican.

Did I forget one? Oh yeah, thanks to Republican senators who won't do their job, the next president will almost certainly have the chance to end the reign of the Supreme Court's conservative majority--the folks who brought us, to cite one example, Citizens United, a decision Bernie Sanders has rightly and repeatedly condemned.

In 2008, I voted for Barack Obama over Hillary Clinton. I still have concerns about how she approaches questions of foreign policy. I'm hopeful that she's learned the lessons of the Iraq war. If as president she proves that she has not, I will do my part to hold her accountable. I'm hopeful that her emphasis on economic inequality is not something she leaves on the campaign trail, and that her policy and personnel choices as president reflect the priorities that Bernie Sanders, Elizabeth Warren, and other staunch progressives have been emphasizing.

Separate from these hopes, however, I'm confident of the fact that Hillary Clinton is going to be mostly right on most of the issues of great importance to our country. Say what you want about political dynasties, Hillary's diverse set of experiences in both domestic and foreign policy make her more qualified than any president in decades (if not centuries) has been on the day he took office. She was a major White House policy adviser--heading up the effort to reform health care. She served as a U.S. senator, and as Secretary of State. She's definitely ready to be president on Day One.

Elections are about choices. There will be two--or maybe three--major candidates for president on the ballot in November. One of them is likely to be Donald Trump, either as the Republican nominee or as a third-party independent if he wins the most delegates but is denied the GOP nomination (after the "riots," of course). Another might be Ted Cruz, or--if Trump turns out to be the Republican nominee--the party establishment could put up some other conservative as a third-party candidate. This election could have more uncertainty than any since 1912--the last time the Republican Party cracked in two.