I was surprised to see Grudem's article. Unlike him, I elsewhere have been critical of evangelical support of Donald Trump and have compared Trump's worldview to that of the Gospel of Jesus. They could not be further apart.

Like Dr. Grudem, I've taught theology, philosophy, and ethics. While my name may not be as influential as Dr. Grudem's, I want to take an opportunity to respond to his article. Specifically, since Grudem calls voting for Trump a "morally good choice," I want to respond by referencing, however brief, various approaches to ethics. I believe that regardless of approach, when combined with biblical standards of love and charity, that there is no realistic avenue to calling Trump a "morally good choice."

I would first like to agree with Dr. Grudem insofar that voting for a flawed candidate is not a morally wrong choice. Despite it being plainly obvious (what candidate is not flawed?), it is a often considered a duty to vote in a free society. Duty is an ethical term, often associated with deontological (duty-focused) ethics. If it is a duty to vote, as Grudem says, then we ought to vote for the candidate that is least objectionable and will promote freedom to the greatest amount of people.

However, if that is Grudem's standard for the presidency, then it must exclude Donald Trump. This is especially the case for Christians whose ethic, no matter what approach to ethics one takes, must be centered on love. Jesus makes it clear that this is the highest command and it is our duty to carry out (Luke 10:26-28).

Love is a topic never discussed by Trump. As Dr. Grudem has willingly admitted, Trump embodies a character that is "egotistical, bombastic, and brash." In virtue ethics, classically associated with St. Thomas Aquinas, Trump's characteristics are called vices and stand in opposition to virtues - characteristics of the good. Grudem goes on to write, "(Trump) often blurts out mistaken ideas (such as bombing the families of terrorists)..." Grudem calls Trump's ideas and characteristics flaws, but he doesn't think "they are disqualifying flaws in this election." This appears to be one of Grudem's arguments: Trump is a flawed individual but his flaws can be overlooked due to the policies he would enact. Despite the fact that Trump has not elucidated any policy position further than offensive sound bites, Trump's character ought not to be separated from his vision for America. If Grudem had given any serious thought to Aquinas' Cardinal Virtue (prudence, temperance, courage, and justice) he would come to realize that Trump manifests the opposite of Christian living.

Grudem also excuses Trump for racist, sexist, and Islamophobic language. Instead of holding accountable a presidential candidate for statements which would be fireable and disqualifying offenses in any workplace, Grudem instead shifts the blame on a "hostile press" for exaggerating "careless statements." This downplaying of racism and sexism only heightens the probability of further normalizing this hateful worldview and extending injustice to those who have been historically oppressed. This stands in stark contrast to the teachings of Jesus, who made every effort to stand with those who were oppressed. Jesus called the marginalized "blessed." Trump wants to further marginalize those people.

Grudem spends a portion of his predictions of a Trump or Clinton presidency on religious liberty. Under Trump, Grudem says that religious liberty would thrive. Yet in reality, it would only thrive for Christians. Muslims, as Trump has vowed, would be banned from entering the country. This is a restriction based on religion, an outpouring of religious persecution. In the last year or so, evangelicals have been increasingly worried about religious liberty and their freedom to express their Christian faith. If this is the case, then how can they in good conscience vote for a man who so openly speaks about violating that right for others? If Trump is willing to subject Muslims to that treatment, is it outlandish to think that Christians could also have their rights restricted under a Trump administration?

In the subsection titled "Seek the Good of the Nation," Grudem returns to the idea that it is a moral duty to vote. Here he takes and additional step. Grudem writes, "I think Christians today have a similar obligation to vote in such a way that will 'seek the welfare' (referencing Jeremiah 29:7) of the United States. Therefore the one overriding question to ask is this: which vote is most likely to bring the best results for the nation?" 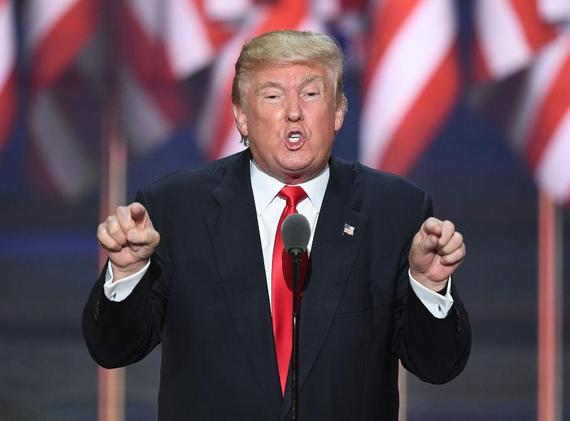 Yet for Grudem, the question he poses above is not open for discussion. It's a leading question, and he reveals that in the two paragraphs that follow. Grudem invokes a series of loaded political language meant to entice frustration and fear in many conservatives. In this year, Christians "have an unusual opportunity to defeat ... the pro-abortion, pro-gender-confusion, anti-religious liberty, tax-and-spend, big government liberalism." Invoking James 4:17, Grudem insinuates Christians have an obligation to vote Republican because they hold the correct beliefs. A failure to do so is sin. Let's be clear on precisely what Grudem is advocating as a moral decision: If you're a Christian, and do not vote for Trump, you are intentionally avoiding the "moral choice" and are thus in sin. Grudem's clear moral imperative is to Republicanism, not religious conscience.

If anything other than a non-Trump vote is sin, then Grudem is advancing the historical conflation of Republicanism and Christianity that has permeated religious communities in this country for decades. It seems to me that the only rational reason that Grudem (and the likes of Jerry Fawell, Jr., James Dobson, and others) can advance for Trump being the "moral choice" for Christians is because Trump is the option that will make this confused political-religious idealism a reality for Christians. However, what Christians need to instead realize is that a Trump vote is indeed an anti-Christian vote. Yes, Trump promises to make American "Christian" again. But can we not see through this thin veil and recognize that many of his policies directly contradict the teachings of Christ? A Trump vote is a vote for the oppression of minority groups (Muslims, Palestinians, Mexicans, the LGBT+ community). A vote for Trump is a vote for increased violence in the form of torture. A vote for Trump is a vote for the characteristics that the Church has encouraged its constituency to avoid. I can't help but think that the evangelical support for Trump is the gravesite for evangelicalism.

I understand the reality that many evangelicals fear liberal politicians. Yet going so far to defeat liberalism to vote for a man who embodies the antithesis of Christian values is itself an abandonment of the very values Christians have proclaimed to hold dearly. The ethic that Grudem is suggesting is that political ideology trumps the characteristics that Christ has called Christians to embody: love, humility, charity, and kindheartedness. And by insinuating that a non-Trump vote is a sin, Grudem puts the fear of divine punishment in the hearts of Christians. Philosopher Alasdair MacIntyre provides an explanation for why this is so powerful in his book, A Short History of Ethics. MacIntyre writes, "If I am liable to be sent to hell for not doing what God commands, I am thereby provided with a corrupting, because totally self-interested, motive for pursuing the good. When self-interest is made as central as this, other motives are likely to dwindle in importance and a religious morality becomes self-defeating."

If Grudem wants to vote for Trump, fine. But let's not mince words. He cannot soothe his conscience by convincing himself that this is the moral or Christian choice. There is no reconciling the worldviews of Trump and Jesus. Jesus' ethic of love is often evidenced by his interactions with the Pharisees - the religious leaders of his time. The Pharisees were focused on obedience to the law, which in turn gave them power and authority over others. When Jesus' ethic of love was lived out and pressed against this organized political-religious structure, the Pharisees fought back, made threats, and ultimately plotted to kill Jesus.

Grudem ended his article with a series of predictions on the supposed impending doom of a Clinton presidency versus the supposed freedoms which Christians will enjoy under a Trump administration. Such predictions are cyclical with every election and have become devoid of any substance. But I suppose I'll end my article with a prediction as well based on the evidence that Trump has given us for over a year. A vote for Trump is a vote for bigotry. It's a vote that will restrict religious freedom for anyone that is not a Christian. It will lead to bullying and violence.

So, which vote is most likely to bring the best results for the nation?