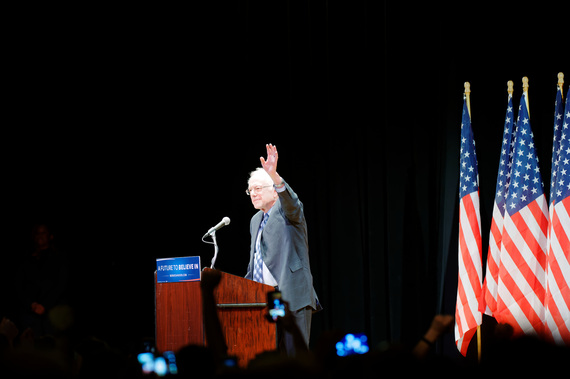 I'm going to vote for a candidate who represents my values this election year and I'm not going to compromise on that.

I don't take this position lightly even though some have called me (and others taking the same position) stubborn, ignorant, entitled, idealistic, and anti-pragmatic for this decision.

I'm going to say something radical here: I've been where those people saying those things are at... and I've evolved past it. I don't say that arrogantly. I'm simply familiar in working with people's fear and I know the difference between all the stories people make up to prove they're stuck and that what they want isn't possible and the infinite possibilities that are available when we lead from desire, inspiration and integrity to our values. I see it every day and I help people sort through it so that they can have what they want in life. I'm a life coach. This is my job.

This is what I know: When we're stuck, we're choosing to stay stuck. There are no exceptions to this. Maybe we don't like our choices. Maybe one of our choices is safe but will keep us stuck and the other choice is scary as hell... but that doesn't make it any less of a choice.

When we want things to change but we're waiting for a better time to make those changes, we're caught in a limiting frame of mind. From that perspective, the conditions will always feel impossible and it will never feel like a good time. But the truth is, once we take the leap, only then do the possibilities really begin to open up. Courage, inspiration, integrity, and perseverance are rewarded. But those who never choose to take the leap anyway, despite their circumstances, will never discover that the main thing holding them back was their mindset.

Choosing a candidate on principle, rather than out of fear of the opposing candidate, is a sign of resolve and integrity that one earns after being driven by fear for a long time and realizing it's not working. It's a switch that happens when we become willing to make sacrifices for what we hope is possible. It's a decision we make only once we decide not to believe the limiting stories we've been buying into and decide that we believe in the power of integrity and perseverance. Many great leaders have taken this route and accomplished awe-inspiring things that everyone said were impossible, simply because they upheld their commitment to acting by their conscience even when it was the hard thing. Many revolutions have been won with this perspective.

I know how it feels to want to take the route of least resistance because we've been here before. I voted for Al Gore in 2000 when he lost the presidency to George W. Bush. It was my first vote in a presidential election and, at the time, I was furious with Ralph Nader supporters for voting their conscience. I blamed the outcome of the election on them, but in fact it wasn't their fault George Bush was elected. It was the fault of the two-party system, our campaign finance laws, our mainstream media bias, and our electoral college laws, that presented us two uninspiring candidates and no political mechanism to have our true values represented. The truth that I recognize now is that Nader supporters were fighting to uplift the Green Party because, if not now, when?

The republican candidates just keep getting more and more terrifying. If we continue on our current trajectory, every four years there will be a new, scarier boogyman that we need to vote Democrat to save ourselves from. So our choice is this: Do we keep ourselves held hostage by this Chinese finger lock two-party system or do we get courageous? Do we start making the hard choices and sacrifices in the short term in order to create a long-term future with more options?

I get that people are scared. They're terrified Donald Trump is going to become president if I don't vote for Hillary Clinton. They want me to set aside all my objections to her and support her like I have no choice and like she is somehow entitled to my vote. They want to place the blame on me if she doesn't have enough support to win the election.

But therein lies the problem. Those insisting that I'm jeopardizing this country by not supporting Hillary Clinton are asking me to make my decision from fear and you know what? I can't do that. It goes against everything I believe about how the world works. My whole life and livelihood is all about retraining myself and others to believe that we can create great things when we live our truth. It's all about replacing fear-based decision making with desire-based decision making and discovering that that life actually meets you where you're at. If we keep making decisions from fear, our life will reflect that. I absolutely believe that if we want to arrive at a destination that is in line with our values, our truth and who we are, every decision along the way must be aligned with our values, our truth and who we want to be. When we cut corners out of fear, we're off the path toward the life that's in line with our desires and where we will end up will not be somewhere we want to be. It's pretty simple actually. This applies to everything in life.

I will not cast a vote out of fear. I will not be blackmailed to abandon my values and the country I want create. I believe the only way to transform this lose-lose two party system is to start voting for someone else, for outsiders, for other parties, for candidates who are willing to do something wildly different. How else do we expect these other options to ever become viable options with enough support to win anything? How else do we expect the current parties to actually feel held accountable by their electorate? By wishing and hoping? No... We have to start voting for the right people. We have to start now.

And that's why, in this election, I support Bernie Sanders and will vote for him come November.