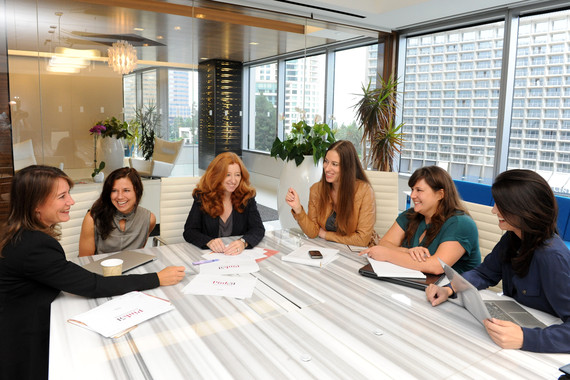 Since the feminist movement began, the power and position of women has changed drastically. Today, women not only make up 51 percent of the population, they also influence 85 percent of all consumer spending in the U.S. Undoubtedly the biggest economic opportunity of the 21st century for businesses, it is also one of the greatest opportunities for women. As more and more move into key leadership roles, they are changing the world as we know it, as we see in Marissa Mayer, Hillary Clinton, Sheryl Sandberg and others.

As women harness this collective power, many are challenging themselves to do more to impact the world in a positive way. This desire is what drove co-founders Ann Lawrence and Marta Ferro to launch Pink51 -- an online platform aimed at harnessing the collective purchasing power of women to grow businesses with women in leadership. Since their launch in June 2014, they have added hundreds of businesses and supported charities focused on supporting economic empowerment and success of women.

Pink51 provides a destination where women can choose to shop with companies that support, promote, empower and value women. "Pinkonomics" is the term they've coined to describe the female economic power that fuels the economy, and which they believe can lead to positive change.

We believe it can be harnessed and leveraged to support women on all levels, from daughters on the playground to moms in the boardroom, from home office to the corporate office, from the small corner store to the largest publicly traded companies.

When talking to Lawrence about what led to the birth of Pink 51, she talks about the need to not only empower and educate women to the immense buying power they currently hold, but to also create community and opportunities for collaboration. "Too many women entrepreneurs feel isolated and alone, adding to the already difficult task of starting a new business or finding funding, which is still a male dominated arena." In fact, only 2.7 percent of companies that received venture capital funding between 2011 and 2013 had a woman CEO, according to a recent study. Today, 36 percent of U.S. business owners are women, according to the Small Business Administration.

As a partner at DLA Piper, Lawrence said that she too has experienced isolation of her own in the climb in the very male dominated world of law. Lawrence shares,

So many women feel they have to give up their authentic selves to compete in a man's world, and find it challenging to climb the ladder into executive positions, so they opt out. There must be a better way to harness women's leadership and for women to get ahead and make a difference. We see instances of women galvanizing and coming together to making a positive change for the betterment of all. It's time women realize how much of an impact they can really make if they were more conscious every time they vote with their dollars.

Contrary to what people might say, we do not want to get special treatment as women led businesses. Our goal is to create a critical mass of sorts, by building a business case for why supporting and funding women led businesses is a good idea, both financially and for the betterment of society as a whole.

In fact, according to Catalyst, companies with more women at the top may be better practitioners of corporate social responsibility (CSR). Research has shown that such companies also financially outperform, on average, those with fewer women in senior leadership roles. Women also tend to make decisions that are more future-oriented, less focused on short-term gains, and more strategic, not only towards the bottom line, but for all stakeholders, including our communities and our planet. Lawrence adds,

It's time that we take responsibility and ownership by demanding our place in top decision making roles. In order to get there, we have to convince businesses that investing and funding women is the right thing to do. And that's why Pink 51 is so important.

So what makes up a Pink business? A Pink business supports, values and promotes women. It must be at least 50 percent owned by a woman, or have 20 percent of their board made up of women, and or have a woman CEO. Many of the qualifications have been set just over the average to encourage companies to stretch their female representation since it has been proven that more women in leadership roles within a company improve the bottom line.

If you are a woman running a small business, you can sign up for Pink Pages at www.pink51.com. Pink51 donates 10% of profits to charities that promote women and girls' economic development and leadership success. By supporting Pink51, you are not only investing in women, but you're voting with your dollars for a more equal future. And that might just lead us all to a better world.