WASHINGTON -- Argentina's 2001 foreign debt default, now a subject for history and economics textbooks, is still playing out in the pages of Washington's hometown papers, reflecting an ongoing lobbying battle over the ill-fated bonds.

Members of Congress thumbing through Politico's print version or The Washington Post last week would have seen a full-throated war between the government of Argentina and investors looking to use the U.S. Congress and courts to extract a heavy profit by collecting on Argentina's defaulted sovereign bonds -- with dueling ads in Politico just pages apart.

Investors buy up distressed debt on the secondary market at a deep discount -- often pennies on the dollar -- and then sue the issuer of the debt in an attempt to force full repayment. Referred to as "vulture capitalists" by their detractors, these investors can turn a bond purchased for 10 cents into a repayment of a full dollar, a phenomenal return on investment.

In the aftermath of the 2001 default, Argentine bonds were for sale dirt cheap because the government had already made clear that it could not honor them. Most of those bondholders exchanged their defaulted bonds for new ones, at a 65 percent loss. But a few investors held out for the full sum, which they planned to recoup through often-protracted legal battles.

For this, political leverage has proven crucial to debtholders, who often wage all-out public relations campaigns to harass, embarrass and pressure the defaulted nations into paying up. Ads like the ones attacking Argentina are one method by which vulture capitalists seek to put the screws on a country by damaging its reputation among political decision-makers.

Vulture capitalism is as old as the United States. The various colonial states issued significant debt to cover the costs of the Revolutionary War, but once the war was over, the bonds fell dramatically in value as it became unclear whether or how they would be paid off. Alexander Hamilton, the nation's first treasury secretary, decided to absorb them as part of the new national debt and pay them off at full price -- but not before word leaked out to well-connected speculators, who snatched up the bonds for pennies and quickly sold them back to the new federal government for a dollar each. It was the bailout that birthed the nation.

In the case of Argentina, one investment fund that the country contends bought defaulted debt for less than $50 million is now demanding more than a billion dollars in payout. To pull off the move, debt collectors of this magnitude need political savvy and friends in the right places. They pay handsomely for both.

The American Task Force Argentina, the group advocating for full repayment on the bonds, has launched a broad attack on Argentina in its PR campaign. Last Thursday's Politico ad, paid for by ATFA, slammed the country as a safe haven for narcotics traffickers. Another ATFA ad accuses Argentine President Cristina Kirchner of making a "pact with the Devil," pointing to a legal memo between her country and Iran involving Argentina's effort to prosecute Iranian defendants in a terrorism case. 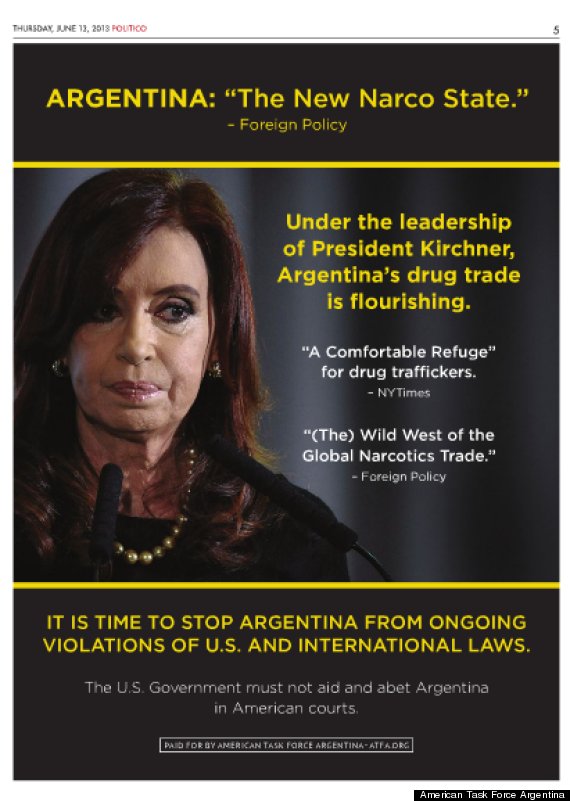 The Argentine government fired back against the ads with full-page responses in Politico and The Washington Post that same day. The Argentine ads accused ATFA of shilling for "sovereign debt profiteers" and called the group's claims "unfounded and unscrupulous."

ATFA's website describes the group as "an alliance of organizations united for a just and fair reconciliation" of Argentina's debt default. ATFA spent at least $150,000 lobbying Congress in the first three months of this year, according to disclosure forms, with the biggest chunk going to the powerhouse law and lobbying firm Covington & Burling. Last year, it spent just shy of $1 million on lobbyists, and since 2007, it has spent more than $3.8 million on K Street consultants.

ATFA's membership largely consists of two seemingly unrelated groups, the "vulture" investment funds, which are hoping to profit from court-ordered debt payments, and U.S. farming and cattle groups, which view Argentina as a potential competitor. When ATFA was initially founded in 2007, it had only five members, all of them vulture funds. It has since expanded to include agricultural groups that range from the U.S. Cattlemen's Association to local chapters of Women Involved in Farm Economics (WIFE).

Robert Raben, a former Hill staffer and Clinton administration official-turned-lobbyist, serves as the executive director of ATFA. "We do whatever we can to get our government and media's attention focused on what a bad actor Argentina is," he told The Huffington Post.

"Some of my members literally hold the debt, some hold the debt as an institutional matter, some litigate in court, and some of my most active members are the cattlemen," he said. "They've been furious with Argentina for years, because they believe that Argentina manipulates its currency in order to increase beef exports."

Among the investment funds listed as members of ATFA is Elliott Management, a hedge fund controlled by billionaire and major Republican donor Paul Singer. According to documents filed by Argentina in a New York federal court lawsuit that Elliott Management has brought against the country, an Elliott subsidiary, NML, paid approximately $48.7 million in 2008 for the Argentine debt in question. Now, the company is demanding that Argentina repay it $1.44 billion, including interest.

Singer is no stranger to battles over distressed sovereign debt, having won judgments against the governments of Peru and the Democratic Republic of Congo in similar cases.

Another fund in the ATFA coalition, FH International Asset Management LLC, is run by Eric Hermann, who successfully collectedon distressed debt from Liberia in late 2010, despite international pressure not to sue a country that was, at the time, the third poorest nation on earth.

While Singer and Hermann pursue Argentina in court, Washington lobbyists like Raben are making sure the issue remains in the public eye more than a decade after the initial default.

ATFA has two co-chairs: Robert Shapiro, a Clinton administration undersecretary of commerce, and Nancy Soderberg, who achieved the rank of ambassador in the Clinton era as an alternative U.S. representative to the United Nations. Like Raben, both Shapiro and Soderberg founded consulting and advocacy firms after leaving public service. Shapiro's financial consulting firm is called Sonencon Inc., and Soderberg is CEO of Soderberg Global Solutions.

Along with Raben, the group's chairs earn their consulting fees in part by writing op-eds on how unstable Argentina is and how its refusal to pay the vulture funds should serve as a warning to others not to do business there. Since 2009, these opinion pieces have appeared in The Wall Street Journal, The Hill, Britain's Daily Telegraph and The Huffington Post, among others.

HuffPost published three op-eds on the topic, one by Soderberg in 2009, another by Shapiro in 2011, and a third by Raben in April of this year. The connection between the blog posts and the lobbying campaign to force Argentina to pay its bondholders was uncovered by HuffPost during the reporting of this story. (The posts were subsequently removed for the authors' failure to disclose their conflict of interest when the posts were submitted.)

So far, Raben claimed that ATFA has "been able to convince a few other nations to vote against Argentina on a variety of issues."