[Update 3, 11:45 AM: Xeni Jardin of BoingBoing explains why this is important and why you should care.]

[Update 2, 10:15 AM: The volume of angry email I woke up to this morning has astonished me. People, think about this: I pointed out a blooper & was threatened with legal action for doing so. Now the basis for that threat is totally blown away by W's own sister publication. What would you do? This isn't about a hip, it's about my reputation - and about the rights of all bloggers to express themselves without being bullied with threats to their livelihood. Consider this before writing to tell me how stupid/obsessed/vicious I am.]

In November, I pointed out a retouching blooper on the cover of W Magazine. Demi Moore responded with great outrage, posting what she claimed was the original, and calling the observation "bullshit". I offered $5,000 to the charity of her choosing if she proved it. From there, it died down for a while - until mid-December, when I was served with a "confidential" cease and desist letter from her attorney, Martin Singer, along with statements from W Magazine and the photographers that the image was "absolutely not retouched." I published those letters, and an embarrassingly long response and analysis. Not because I care about her hip - but because I care about free expression, my reputation, and the rights of other bloggers to say what they want (especially when it's true) without fearing for their livelihoods.

Fast forward to Christmas weekend. Right when we all thought (hoped) this whole thing was over, something comes along that, as the Jerky Boys would say, puts a whole different paint job on things. I was back in Maine for Christmas (and of course, holding my breath for an apology and retraction from Demi Moore and her legal team), just hanging out with my Mom and her cat - and in came a cameraphone tip from halfway 'round the world. [Thanks, Joe!]

The January 2010 issue of fashion magazine W Korea just hit the newsstands (with the ironic subtitle "Women in Full"). Unsurprisingly, they decided to use the excellent Mert & Marcus shot of Demi Moore. But very surprisingly, they installed a new hip on Demi. So: even W's sister publication thought the image looked weird enough to fix. 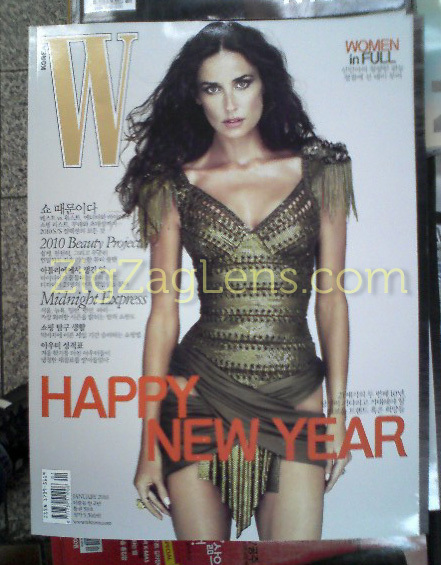 This raises a few serious questions for Martin Singer, his client, and W: did W's Korean team add in a fake hip because they just kinda thought it looked awkward? (Y'know, like I did, before you attacked, discredited, and threatened to sue me?) Or did they merely reveal a hip that was already there, but that Singer, et alia litigiously denied had been accidentally obliterated?

If it's the former: are Singer, Moore et alia now going to pursue legal action against W Korea? By retouching the photograph's supposedly "genuine representation" of her "absolutely not retouched" hip, did W Korea imply the same things Singer claims I did (but which, of course, I didn't)?

If it's the latter: who was aware of this? If Mr. Singer and Ms. Moore were aware, this raises some rather serious legal questions. Regardless of it being the dumbest argument ever, some very serious core principles are in play.

Anyway, to my eyes, the W Korea image looks great - it's a beautiful cover, and anatomically correct! If I'd seen this image in W's December advance, I never would have said a thing - except, perhaps, "nice work!" (And, had I not been threatened with a lawsuit, I surely would never have noticed the deformed thumb.)

My attempts to secure comment from the W Korea editorial team were (of course) unsuccessful.