ARLINGTON, Va. -- Itinerant artists Zack Weaver and Rob Fogle say only one person called the police on them during the two weeks they lived in a truck in Shirlington's dog park, painting a new mural on doggie day care Wag More Dogs' outside wall.

"She even pointed to the back of my truck and said 'There's boobs on this truck!,'" says Fogle. And, indeed, there are big green spare-tire boobs on the truck, which doubles as a roving black-light art gallery called the Art Cream Truck.

Big green boobs not being actionable, nothing came of the call. "The cops were super-awesome," Fogle says.

Fogle and Weaver came to Virginia from Wilmington, N.C., where they'd had a stationary art gallery. (Both are originally from Michigan; Fogle says he ended up in N.C. due to a "flat tire and a boa constrictor" while Weaver was, less enigmatically, working on the TV show "One Tree Hill.")

They hit the road in June, going up and down the East Coast in the Art Cream Truck, which, they say, is a great place to show black-light art but only gets about seven miles to the gallon. Sometimes the pair have a destination in mind -- they are heading to Miami next, for an exhibition and then for Art Basel -- and sometimes the truck refuses to accelerate, and they find themselves rolling downhill to, say, Charlottesville.

That van first moseyed to Arlington over the summer, not for any mechanical quirk or special purpose.

"We came here and happened to run into Smokey Shope," says Fogle. "Just by chance. And they needed a mural done."

The Crystal City head shop mural featured -- past tense -- a man smoking a cigar. It quickly came to the attention of Arlington County, which complained that it violated sign ordinances -- county regulations say that if a mural has images relating to the mural-owner's business, then it isn't just art, it's a sign and has to comply with various zoning ordinances (the size of the mural is then regulated; certain permits are required).

Smokey Shope's mural was quickly altered -- the cigar was turned into a whale; the county became satisfied that the mural was turned into just a mural. And soon Weaver and Fogle got a call for another commission.

Wag More Dogs is the business that lost its mural battle with Arlington County. That mural, showing cheerful, cartoonish dogs chasing bones, had been painted on a wall inside the Shirlington Dog Park after the business opened in 2009. In 2010, when Arlington announced that these depictions violated the county's sign ordinances, Wag More Dogs' owner Kim Houghton didn't turn the bones into whales. She covered the mural with a blue tarp and sued, saying that the ordinances were unconstitutional.

"We just happened to be coming back to the area when [Houghton] needed the mural, so it worked out perfectly," says Fogle, who says it's "a good possibility" that he and Weaver were chosen for the project partly, at least, to stick it to Arlington.

The pair were given more or less free rein. "The only thing we couldn't do was have dogs on it," says Fogle. The finished product shows two birds sitting in a hot tub in a tree -- one is loosely based on Weaver, the other on Fogle. Another bird, with pigtails, swinging from a tire swing attached to a tree that looks like a city building, represents Houghton.

The mural took about two weeks to complete. During that time, the artists lived, mostly undisturbed, in their truck, in the dog park.

"It was weird walking through the park without a dog," Weaver says, petting a panting dog that's come over to say hello.

The dog's owner walks by. "Is that your mural? I really like it. It's fun," she says.

"Thank you very much!" says Weaver.

"The thing is we both love dogs," says Fogle. "I definitely came out loving dogs even more." 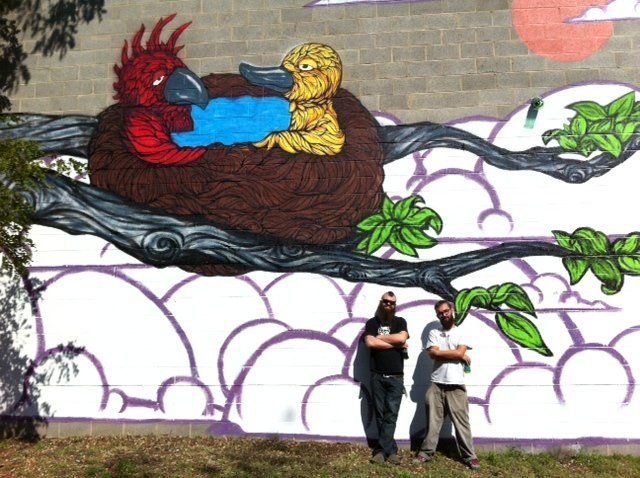