If you feel the economic recovery hasn't helped your pocketbook much, it's not just your imagination.

The annual wages of the bottom 90 percent of workers declined by 1.2 percent between 2009 and 2011 when adjusted for inflation, according to a new report from the Economic Policy Institute, a left-leaning think tank. Meanwhile, the top one percent's wages rose 8.2 percent during the same time period by the same measure.

The richest Americans have benefited the most from the economic recovery so far. The top one percent captured 93 percent of all income gains during the first full year of the economic recovery (2010), according to a study by Emmanuel Saez, an economics professor at the University of California at Berkeley. That was largely due to the fact that rich people hold most stocks, and the stock market has rebounded strongly since the recession. The new report from the Economic Policy Institute signals that wages also have recovered for the rich.

The rich have been gaining far more economic ground than the rest of the country for decades, as demonstrated in this graph from the Economic Policy Institute: 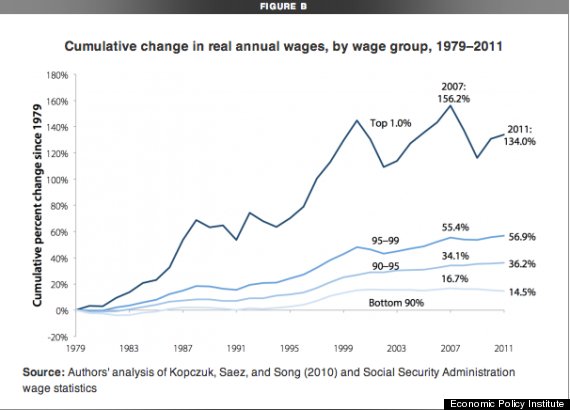