Ever feel your work isn’t being adequately represented by the final amount on your paycheck?

Turns out that nagging sense of injustice isn’t just a hunch. A recent report by the Economic Policy Institute reveals that benefits and wages haven’t kept up with the increasing productivity of American workers, both in private and public sectors.

The report, “The Sad But True Story Of Wages In America,” by economists Lawrence Mishel and Heidi Shierholz, finds that American workers across the board -- whether in the private or public sector, high school- or college-educated –- "have suffered from decades of stagnating wages despite large gains in productivity." The trend isn’t new, either. Between 1979 and 2009, EPI says, U.S. productivity increased by 80 percent, while the hourly wage of the median worker has only gone up by 10.1 percent.

Some Americans have certainly had it worse than others. Take those with no more than a high school diploma. In the private sector, high school graduates saw a real hourly-wage increase of only 4.8 percent between 1989-2009. But in the public sector, where real hourly wages have gone up only 2.6 percent for people with an equivalent education, things are even worse.

The chart below shows the increase in total compensation -- both wages and benefits -- for public and private sector employees against the more substantial increase in productivity: 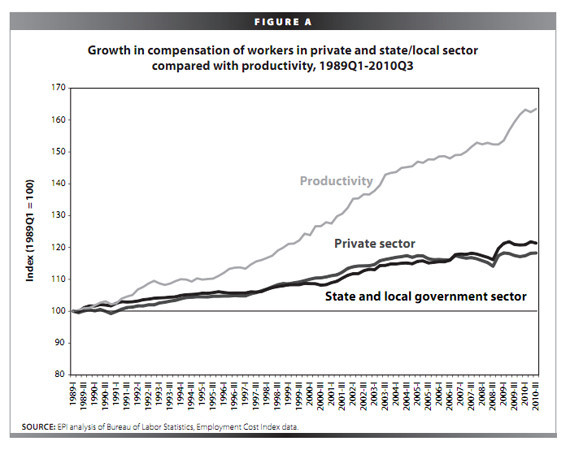 The rate at which U.S. wages increase remains far from constant. When broken down by year, it’s clear that almost all increases in wages and compensation occurred during the late 1990s, specifically from 1996 to 2002. In stark contrast, wages for both college-educated and non-college educated workers in the private and public sectors have largely stagnated since 2008.

Is this disparity between productivity and pay a result of U.S. economic policy? The report contends so. Rather than supporting jobs, EPI says, economic policies have focused on the consumer. Policies deregulating the economy, weakening unions, and promoting globalization have succeeded in lowering prices. They’ve failed in providing workers with compensation worthy of their efforts.